If ever a book deserved more stars – and a TV adaptation – it’s this one.

It would make an utterly brilliant Netflix show as it has all the elements you need for success:

1) An opposites attract plot featuring a grumpy one and a sunshine one.

2) The UST of a pining ‘will they, won’t they’ office working relationship that’s really so much more.

3) Tensions galore with a secondary plot involving the adaptation of a British TV show onto one for the American market.

4) Fanfic 😉 the adoration lovers of a book or TV series or film can have for the characters. You only need to look at Hugo awarded A03 to see the power of transformative work.

5) Two heroes who truly see each other, flaws and all, even if one of them (yes Lewis, I’m looking at you here #sideeye ) needs it practically stamping on his forehead.

Bonus 6) Fantastic setting, great secondary characters, and a beautiful nod to the duplicitous way certain elements of the creative media industry have for queer baiting or burying the gays.

It’s also subversively funny, tender and witty, with an elegance of narrative that just flows beautifully from start to finish.

I cannot praise this book highly enough. I adore the work of both authors when they write separately, but together they’re producing something magical.

I cannot wait to see what comes in books two and three (Owen please?!)

My Heart was bursting after this fabulous debut novel from JR 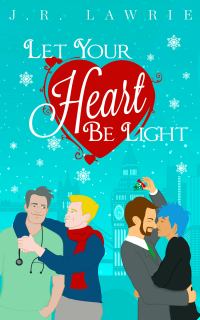 Let Your Heart Be Light by J.R. Lawrie

This book focuses on two couples with three short stories which give the initial meetings of each pair and a bonus second dip into Zach and Richard’s life.

JR’s writing has such charm to it. Both romances are set in London but they’re different in tone.

David and Julian’s is the filling being book ended by Zach and Richard’s extraordinarily impressive storyline and I’d absolutely kill for a full-length novel with them.

Not to take anything away from the doctor and his upstairs neighbour come patient.

Theirs is a sweet, bumbling fall into feelings after Julian has an accident which puts him in David’s loving hands.

But Zach and Richard are special. If you’ve ever seen the British TV show Yes Minister and Yes Prime Minister, then you’ll see little nods and hints in this book to what goes on behind the scenes of the “corridors of power”.

I loved it so hard. The first story, of how they meet, is wonderfully funny, although I internally cried when Zach described Richard as an older man when his Twitter handle included a 1978 birthdate.

But The Farringdon Club had me howling with laughter. I want Richard Curtis to get hold of this book because OMG, some of the scenes in this are prime material for a film from him.

Just brilliance from start to finish, I was sad when I realised I’d reached the end of the book.

Do yourselves a favour and pick up this one when it comes out next week, it’s a joy.

Posted on September 5, 2019 by Mirrigold

Yours, Forever After by Beth Bolden

In a complete departure from her usual writings, Beth Bolden visits the world of the fairy tale.

With Yours, Forever After, she gives the reader an utterly compelling and truly delightful romance between a naive young Prince and a world-weary jaded man who’s long given up on his royal birth.

Throw in a sarcastic and snooty unicorn and this has all the makings of a wonderful tale of heroes and villains, great adventures, slow burn romance and that’s what you get.

From Gray’s initial scepticism and unwillingness to get involved, to the sly manipulation that the King of Unicorns performs on his unwitting heroes, to the great bunch of side characters who appear along the way, Beth delivers.

I will declare an interest here, as I was once again lucky enough to be a beta reader for Beth, but there were very little suggestions to make because the pacing of this book takes the reader through from the hesitant first exchanges and into an exciting ride which sees all the hallmark moments you’d expect from a fairy story.

I do hope there’s more in this world as I’d love to see what happens next for Grey and Rory and I rather miss the imperious tone of Evrard telling everyone what to do and how to behave as they head off into the mountains to find a hidden treasure which turns out to be something rather more than just that.