Explosively hot and packed full of all the feels

We Have Till Monday by Cara Dee

Just like We Have Till Dawn this one is explosively hot and packed full of all the feels.

Anthony, Nicky’s older brother, has been basically cruising through life on half-speed without any great lows but no wonderful highs either when he wins a competition to cook with a famous chef he follows on social media.

But the reader knows that he’s not just won a chance to visit Nashville and cook with celebrity chef August King, but that August’s much younger partner Camden has been plotting ever since he saw Anthony’s feed for the Music Institute he runs with Nicky.

The story evolves in a beautifully organic fashion from the moment Anthony encounters August at the end of his ranch’s drive when he comes to get his bearings after driving from New York to Nashville.

It’s clear from the off that the sexual chemistry between all three men is off the charts. But there’s a complication Anthony hadn’t expected.

Camden is a little who regresses through a number of different age points, some including sexual behaviour, others not, and Camden knows August gets lonely when he’s essentially acting as a single parent when he’s regressed into his non-sexual state.

Which is why he chooses Anthony, he believes he could be the missing link in his relationship with August and help stop him feeling alone.

How this is navigated becomes an integral part of the narrative and Cara unfolds the story, which takes place over such a short period time but never manages to stray into “instalove” territory.

Relatively low angst, a thread of humour running throughout and the aforementioned steaming hot sex, makes this a perfect read.

Unashamedly sensual and sexual this is a masterclass in relationship building 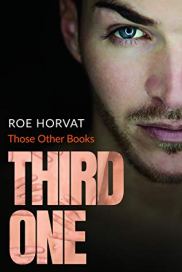 Third One by Roe Horvat

Unashamedly sexual and sensual, Third One is a pitch perfect demonstration of how to write erotica packed full of emotional vulnerability.

With this tale, Roe shows how two can become three when all parties involved have the same desire – to make each other happy.

But there’s so more than just the sex. Luke gives Liam the impetus to slow his workaholic ways, for Marcus, he’s someone to take care of and Luke himself benefits from knowing he is wanted and that he belongs to the other two.

This series from Roe is rapidly becoming one of my absolute favourites in this genre. Guest appearances from Adam and Christoffe also made me very happy!

When it comes to love, Mack Whitman prefers to limit it to writing songs and poetry.

Aromantic, he’s content to have quality friendships and people who sometimes also share his bed. He’s never considered himself the jealous type. But when he sees everyone in his life, from his best friends to his occasional partners, moving toward more settled lives, it leaves him frustrated, disappointed, and worried he’ll be left behind.

Amelia Roberts doesn’t care about the genders of her partners as long as she follows her one rule: Don’t ever fall in love. It’s worked out well for her, since that’s a line she knows she’ll never cross with Mack. He’s as happy as she is to keep things as they are. The only trouble with her philosophy is that she didn’t count on meeting the one person who might change her mind.

Jomari O’Brien’s supportive family made it smooth for him to transition several years ago. Since then, he’s been in and out of love, and other people’s beds, plenty of times, and he has no regrets. Each one is a small part of a larger symphony. Becoming involved with two people at once is a more complicated harmony, but it’s one he’s willing to learn as long as they are.

Their individual melodies become discordant as they struggle to make them fit together. But if all three can learn to play with each other instead of against, they may yet hit all the right notes.

Warnings: There is no graphic description of anything, but there are themes of addiction/recovery/relapse, gender dysphoria, family violence, adultery, and body image

Series BlurbWhen Trevor, Nate, Jamie, and Mack moved in together, they had no idea how it would change their lives. Four roommates. Four stories about living and loving in the City on a Hill.

Other Books in Series: 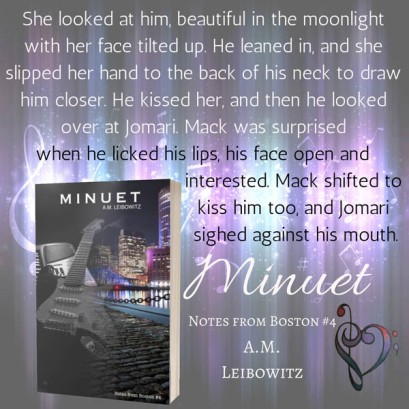 ‘They paid for the groceries and headed for Mack’s van. Once they’d loaded it up, Mack went to start the van, but Trevor put a hand on his arm.

“I’m not letting you go home without talking about what the hell that was back there. You were really pissed off when you came to see me. You’re calm now, but if you go back home, you’re gonna get right back into that mess all over again.”

He was right, and Mack knew it. He turned over the engine. “Look, it’s freezing out here. I’ll drive you back, and I’ll explain on the way.”

Mack waited until they were out on the road to say, “It’s fucking weird, having both of them together. It’s not like it hasn’t happened before, but not like this. I don’t know. It felt like they were doing this bonding thing, and I wasn’t part of that.”

“Do you? Because your family looks different.”

“What is it you wanted? To have Amelia to yourself? You’ve said she’s not your girlfriend. So why does it matter?”

“I don’t know!” But he did know. He had a very clear idea why it bothered him so much. Mack slammed his palm against the steering wheel. “She and I…we’re both fucking Jomari. We all know, but we’ve never hung out just the three of us.”

Trevor seemed to contemplate that. “Yeah, I’d say that’s different from my family. It really bothers you, huh?”

“Not that. It’s…” Mack didn’t know how to explain the way he’d seen the tender gestures between Amelia and Jomari. Sure, she would do the same for him, but it didn’t look or feel identical for some reason Mack couldn’t pinpoint. “I guess they’ve been getting to be closer since she started playing with Cian’s band.”

“Makes sense. Spending more time together. But you think there’s more going on?”

“I don’t know,” Mack admitted. “Up until now, I wouldn’t have thought so. She always said she was mostly into women. She doesn’t date men, and she made that clear to me. I didn’t care. But now here she is, and I can’t really tell what’s going on. She’s already cancelled plans with me so they could go out.”

“Ah.” Trevor was quiet a moment. “People change, you know. Until Andre, I thought I only loved Marlie and the couple times I fooled around with guys were, like, just sex. Then after Andre, I thought maybe Marlie was my exception and I mostly wanted guys. Now I’m not sure, but it doesn’t matter because this works for us. Jamie’s only into men, but I know he’s fucked women on camera and enjoyed it. He said Cian can’t separate love and sex, he’s got a high drive for both, and he doesn’t care about gender at all. Maybe Amelia’s needs have changed.”

It wasn’t only about whether or not her relationship with Jomari was changing. It was why. Why now, after years of things being the same? What made him different from everyone else? Mack hated the feeling she’d finally had enough and was choosing someone who might be able to give her what he couldn’t. But why would she have told him their kind of relationship was enough if it wasn’t? She knew who he was and that he made no apology for it. Was it like Trevor said, and she was changing, or had she been dishonest?

“Listen,” Trevor said as they pulled into his driveway. “Why don’t you invite Jomari for Thanksgiving?”

“It might be easier if it’s not the three of you having to figure this out alone, that’s all.” Trevor unbuckled, but he didn’t move. “Talk to them. The only way I made it work with Andre and Marlie is by telling them both the truth. And the only way I didn’t fuck it up with Jamie was by telling them I needed him in my life too.” He curled his fingers into a fist. “If only we could work that out.”

Mack didn’t reply. Jamie was still a sore spot for both of them. He helped Trevor unload the groceries and put things away. They had some time for him to think about inviting Jomari, but he wasn’t sure he was going to.

“Thanks for your help,” Trevor said. “Hey, you feeling better?”

“Maybe.” Mack accepted the Night Crawlers from Trevor. “I should get these to the others.”

Back in the van, Mack looked at the package on the passenger seat. For once, Trevor was right, but tonight he didn’t have the right words. Instead, he would bring the sour gummies as a peace offering and sit with them this time, even if it meant he had to watch confusing science fiction shows. He pulled out onto the road and headed for home.

A.M. Leibowitz is a queer spouse, parent, feminist, and book-lover falling somewhere on the Geek-Nerd Spectrum. They keep warm through the long, cold western New York winters by writing about life, relationships, hope, and happy-for-now endings.

Their published fiction includes several novels as well as a number of short works, and their stories have been included in multiple anthologies. They are an occasional host for Bi+Plus, a podcast for the bi+ community, as well as doing bi+ advocacy work and curating the best-of bi list on the QueerBooksForTeens website.

They are a social media contributor for Supposed Crimes, LLC, and they post about news, reviews, and updates. In between, they blog coffee-fueled, quirky commentary on faith, culture, books, chronic illness, and their family.

A.M. is giving away a $10 Amazon gift card AND the first three books in the series in eBook format as a single prize. For a chance to win, enter via Rafflecopter: