Romeo Montague has always been a little awkward. His cousin, Benny, doesn’t help, often tossing him into situations unprepared; like dragging him to a Renaissance Faire in the middle of Wine Country.

Julien Capulet, a respected festival promoter, has his own quirks. While dealing with his crazy parents and goofy gay uncles, he holds out hope of meeting the one who’ll see past all the frills.

Romeo X Julien is a sexy homage to Will Shakespeare, with more comedy than tragedy. Entertaining and tender, it shows how the course of true love may never be smooth, and that the LGBTQ community has come a long way in a short time.

Co-creators, Mary Dumas and Bettina Kurkoski, have been fixtures on the Comic Con circuit since 2003. Mary was on staff for a number of convention groups, while Bettina was the artist in residence for those organizations.

In 2015 this friendship became a partnership in creating the comic series, RomeoXJulien. Following this comic creation lead them to Artists Alley in many Fan Conventions for the next five years. In 2019, with the finish of the story they decided to give the comics a bright new life in full color as a graphic novel.

Mary is giving away a $10 Amazon gift card with this tour. For a chance to win, enter via Rafflecopter:

Return to the sensuous world of Romeo and Juliet to discover the story of Mercutio, Verona’s most flamboyant citizen!

​Prancing on the sidelines of the bitter feud between the House of Montecchi and Capuleti, Mercutio harbours his own secret conflict: he is hopelessly in love with his best friend, Romeo Montecchi. When he spies true love blossoming between Romeo and a young Capuleti girl one fateful summer’s eve, Mercutio fears he has finally lost the man he loves, forever.

​Turning to drink, drugs and ever wilder escapades in an effort to ease his aching heart, Mercutio starts to come off the rails, hurtling towards his own spectacular fate …

It was always difficult to ignore the moment Mercutio entered a room. The people of Verona had mostly given up trying. Best let him have his moment, or he may never quieten down!

‘Buona sera, one and all!’ he cried, bursting into the ballroom in a flourish of canary-yellow silk. A sea of faces turned his way, and he greeted them with a frivolous bow.

No one could deny that he at least gave them something to look at. His doublet was undeniably as bright and gay as a canary, heavily brocaded with leaves and flowers in white and gold thread. His fancy sleeves were puffed at the shoulders and slashed to reveal naughty glimpses of violet satin. Tight, particoloured hose flaunted his legs to their utmost shapeliness. His head was topped with a cap of outrageous purple velvet, matching the vibrant gloves adorning his hands.

Velvet gloves in summer? Only Mercutio!

Yes, indeed, he was fair, and it went beyond his sun-blond hair. There was a natural symmetry to his face and body that was nothing short of statuesque. The length of his neck, the width of his shoulders, the curve of his jaw — even the shape of his ears — all were as exquisitely formed as if sculpted by an artist. Yet, it was simply the way he was born. His eyes mirrored the sky: azure by day, sapphire by night. While his lips were not the fullest, they were of the finest shape and definition thanks to their deep crimson colour. He would never deny that Romeo had always been the one with the lips.

Whether Mercutio was vain or not was a difficult question to answer. You had to understand him. He often complained, himself, of the young men he saw preening about the city, obsessed with image and etiquette. He certainly did not count himself amongst that pride of peacocks. He was too much the rule breaker and rebel at heart, delighting in the controversy and outrage he excited as much as the envy and admiration. He was beautiful and fashionable and a living satire of men’s vanity. While others might boast of the height of their brows or the shapeliness of their calves, Mercutio was more likely to pull down his hose and extol the peachiness of his buttocks. In fact, the habit had earned him the epithet il Callipigio, which alluded to sculptures of the goddess Aphrodite that had been worshipped by the ancients for their “lovely buttocks”. 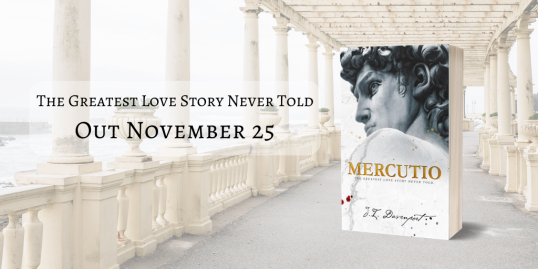 J.I. Davenport has a B.A. in English literature and creative writing from the University of Greenwich. He lives in London with his family and a tomcat named after Cesare Borgia, who he is forever trying to persuade not to invade Naples!

Win one of 5 e-book copies of Mercutio by J.I. Davenport