Release Blitz: Three of a Kind by Nic Starr

Three of a Kind | Nic Starr

What happens when friendship becomes love, and you’re presented with seemingly impossible choices while the world is watching?

Harvey, lead guitarist with Australian rock band, HyperOctane, thought playing at Rocktoberfest would be the highlight of his career. He didn’t expect a performance that would shape the rest of his life.

Admitting his feelings for Harvey was one of the hardest things he’d ever done. Being rejected was crushing. He never thought he’d be living the same heartbreak years later after finally finding love.

He broke Ravi’s heart but he couldn’t ignore the feelings he had for Harvey. It wasn’t fair on Rav, and Bo knew it was for the best, but why did doing the right thing have to hurt so much?

He wasn’t sure which was his biggest regret—hurting Ravi all those years ago, or more recently giving in to temptation and having a one-night stand with Bo. He’d always been close to his younger brother’s best friends, and now it seemed he’d messed things up with both of them.

Now all three of them must confront their feelings for each other. Why do things have to be so complicated?

Oh God. Ravi hated the sound of those words. They took him straight back to that night a year ago when Bo had said the very same thing then proceeded to break his heart.

“Okkaay.” He crossed to the dresser and opened the drawer. He fumbled with the contents as he willed his heart to slow down. Had Harvey sensed his feelings for Bo? Or maybe Harvey just wasn’t ready for everything that had happened between them. HyperOctane was knocking it out of the ballpark and there was so much opportunity open to him. I’m probably holding him back.

“I can see your thoughts spinning from over here. Turn around, Rav.”

He slowly turned and met Harvey’s eyes. Harvey patted the bed beside him. “Come over here so we can talk properly. There’s something I need to tell you.”

That little voice whispered in Ravi’s ear. He didn’t want to hear whatever it was Harvey was going to say. Just the idea of it sent a wave of nausea through him. Just when everything was going so well. Fuck, he’d been so happy lately. Still, knowing he couldn’t put it off, he forced himself across the room.

The mattress sunk slightly under his weight, echoing his equilibrium—he felt entirely off-balance.

“Why do I get a feeling this isn’t good news?” he finally said.

Harvey reached for his hand, his touch warm and familiar, but Ravi didn’t take comfort. He couldn’t, not until he knew what this was about.

“I’m not really sure how to put this.” Harvey squeezed his fingers, green eyes hooded, voice low. “I’ve never had to deal with anything like this before. It’s about Bo.”

And there it was. Just like that Ravi’s heart plummeted. “I think I know what you’re going to say. I’m sorry, Harvey.”

Ravi didn’t let him finish. He wanted to lay his cards on the table—be the first one to air his feelings, not wait for Harvey to confront him with accusations. “He’s such a great guy, and at first I was worried that our past would come between us and I didn’t want the friendship to be destroyed. I mean you and me, and Bo and Parker, we’ve been friends since forever and if Bo and I didn’t get along then it would have tough for you and Parker. I wanted things to go back to how they were before Bo and I hooked up.” Ravi sighed. “But when he moved in while you guys were playing up the coast, it was just so natural to slip back into how things used to be—you know, hanging out after work, doing household stuff.”

Ravi forced himself to take a deep breath. Harvey didn’t look pissed which had to mean something, right? “But I want you to know, nothing happened between us.” He’d never do the wrong thing by Harvey, and he needed him to know that.

“But you wanted it to,” Harvey said softly, not a question. A statement.

Ravi felt his face flushing. He wanted to deny it, but he couldn’t live with himself if he lied. He didn’t want to dishonour his true feelings for Bo, and Harvey deserved the truth. “I would never cheat on you.”

Harvey lips turned up in a gentle smile. “I know you wouldn’t.”

“Are you mad?” Ravi asked, then held his breath, not sure if he really wanted the answer.

Nic Starr lives in Australia where she tries to squeeze as much into her busy life as possible. Balancing the demands of a corporate career with raising a family and writing can be challenging but she wouldn’t give it up for the world.

Always a reader, the lure of m/m romance was strong and she devoured hundreds of wonderful m/m romance books before eventually realising she had some stories of her own that needed to be told!

When not writing or reading, she loves to spend time with her family–an understanding husband and two beautiful daughters–and is often found indulging in her love of cooking and planning her dream home in the country.

You can find Nic on Facebook, Twitter and her blog. She’d love it if you stopped by to say hi. 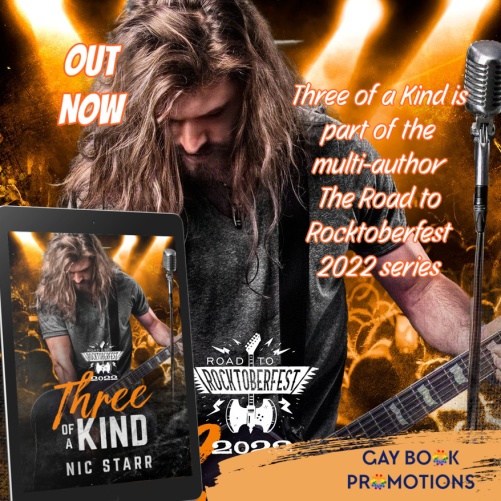 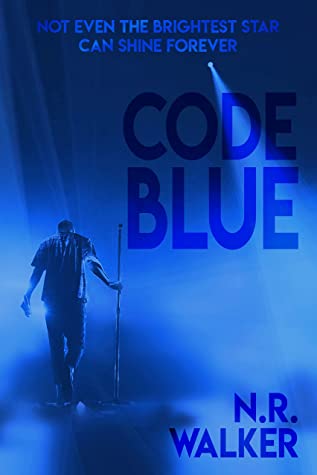 Steve Frost had dreams of wearing the national championship belt in mixed martial arts, maybe even going pro, but instead, finds himself working as a security guard for the rich and famous in LA.

Quickly earning a reputation for his blunt and precise people management skills, he lands a position on the security team for an up-and-coming boyband, Atrous. Years later, he’s head of security. He knows these boys, and with countless tours, flights, car trips, public events, concerts, he’s closer to one band member in particular.

Jeremy’s been a pillar for Atrous since day one, but even more so these last few months. Now the face of the band more than ever, he’s also got himself the attention of a delusional stalker-fan.

When the fame and stress become too much, when Jeremy’s health takes a hit, Steve becomes Jeremy’s lifeline. But as Jeremy knows already, and as Steve is about to learn, not even the brightest star can shine forever. 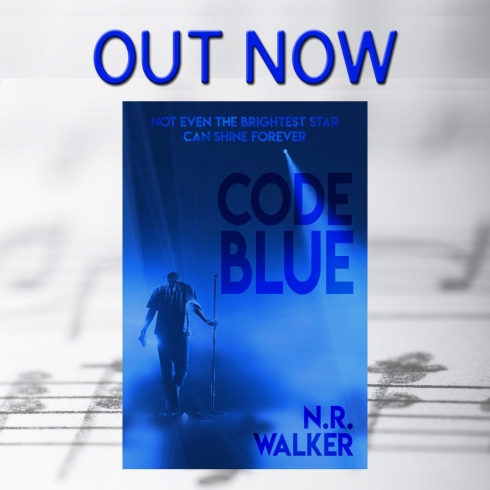 I’m so glad Nic went back to her boy band world! 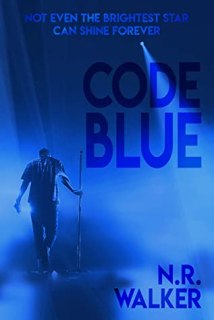 Having thoroughly enjoyed Code Red I was very happily surprised to see that there would be a second book in the series as I’d not really picked up on any vibes from any of the other characters for a return.

Well, I’m very glad that Nic saw something in the relationship between singer and songwriter Jeremy and Head of Security Steve because Code Blue is a beautiful romance, filled with all the feels, some angst, a lot of plot tension and a wonderful ending.

On the way I will admit there were moments when I was shaking my head thinking not sure that’s actually possible even with the best hacking skills in the world, (plot point not relationship) but I just let it go and it works within the narrative.

I loved how this isn’t an easy journey for either of the two men, Jeremy’s never been attracted to a man before and he can’t understand his feelings, while Steve’s got lots of hidden traumas from an incident when he was younger.

But, together they just work and, as they navigate the attraction between them, the stalker plot plays out alongside their growing feelings and it totally worked for me.

While it’s only low/medium steamy, everything was still full of great emotional connectivity and a lot of vulnerability from both men and it definitely had me going awwww a lot!

I’m not going to go into too much detail but I really loved seeing how this played out and I think it had an ending which fit well.