Release Blitz: Her All Along by Cara Dee

Her All Along | Cara Dee 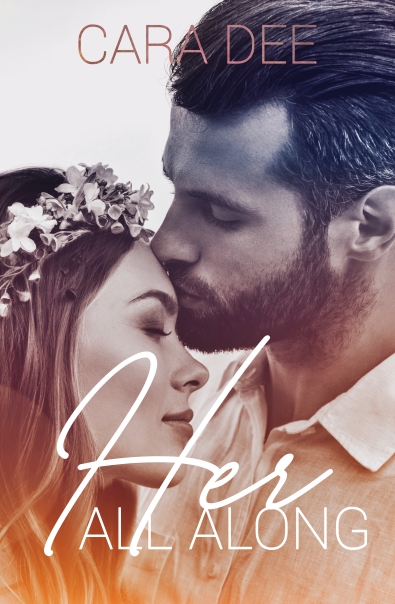 I’d craved an ending for as long as I could remember. An ending to the crippling hurt, the blinding rage, and this sense of confusion and loss. I didn’t know who I was. I had no identity. I just hated.

With one small flame after another, she lit up my path toward redemption and showed me a life worth living. It was how our love story began—without fanfare. Just a flicker in the dark. 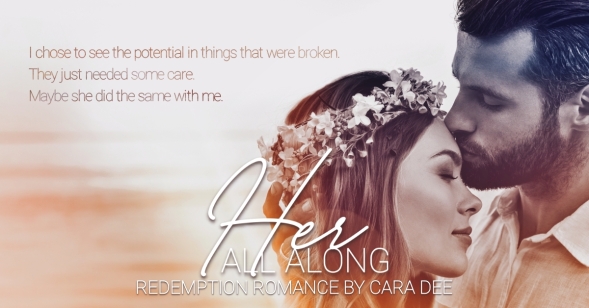 Darius laughed. “Maybe not, but never underestimate a survivor.”

Survivor. I wasn’t sure I’d use that word to describe myself.

“It all depends on how we deal with trauma,” he said. Or slurred. “You can be a runner—most of us are, to an extent. It’s ingrained in us to try to escape trauma. But real runners…they reach a whole new level.” He exhaled some smoke. “You can be a fighter. That’s me. Fighters can be good—but they also carry a shitload of anger and rarely know what to do with it. We’re cocky sons’a bitches too.”

“No argument.” I smirked wryly.

“Then there’s you.” He threw an arm around my shoulders and nudged me back toward the bar. “Even survivors have limits, but you can take more shit than anyone. To others, you come across as a bottomless pit. Regardless of what life throws at you, you keep getting up in the morning. You get up after every fight, you get up after every blow you’re dealt.” He took a deep pull from his smoke before throwing it away. Then he patted my chest. “That’s why I know you won’t use that sweet 686 that you’ve hidden in your towels in your bathroom upstairs.”

Fuck. I swallowed hard against a bout of nausea. With those words, I sobered up.

He formed a gun with his fingers and pressed them to my temple. “It goes against your nature to stop breathing, my friend.”

I’m often awkwardly silent or, if the topic interests me, a chronic rambler. In other words, I can discuss writing forever and ever. Fiction, in particular. The love story—while a huge draw and constantly present—is secondary for me, because there’s so much more to writing romance fiction than just making two (or more) people fall in love and have hot sex.

There’s a world to build, characters to develop, interests to create, and a topic or two to research thoroughly.

Every book is a challenge for me, an opportunity to learn something new, and a puzzle to piece together. I want my characters to come to life, and the only way I know to do that is to give them substance—passions, history, goals, quirks, and strong opinions—and to let them evolve.

I want my men and women to be relatable. That means allowing room for everyday problems and, for lack of a better word, flaws. My characters will never be perfect.

I’m a writey person who loves to write. Always wanderlusting, twitterpating, kinking, cooking, baking, and geeking. There’s time for hockey and family, too. But mostly, I just love to write. 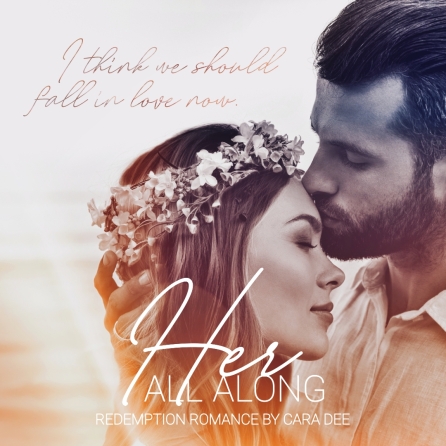 Because sometimes it takes dying to have the time of your life.

Nord wakes up to find himself sort of dead. Well, that is to say, he’s dead, alright—murdered, in fact—but not in heaven, at least not yet. In this limbo-like state, he meets Max and learns that everyone there is waiting for the final poof, hopefully to a better place.

Only, with unfinished business back in the real world, like bringing his murderer to justice, Nord’s poof is nowhere in sight. And so, he and Max set out to find the killer and make things right again. Of course, that’s easier said than done when you’re nothing more than a couple of randy spirits.

With the help of Voltan, a diminutive mystic with a predilection for turbans, and Clark, a nerdy computer geek eager to shed his loner past, plus a ghost accountant, Bruce, Bruce’s drag queen brother, Eve O’Destruction, and Nord’s kick-ass mom, the newly enamored pair set out to hunt for the murderer, and are quick to discover how much they’d taken for granted when they were alive.

I woke with a start and stared up at the ceiling. “That’s weird,” I said. “Where’s my ceiling fan?” I blinked. I blinked again. I thought to make it a trio, but then realized I hadn’t blinked the first two times—which is to say, I blinked but there wasn’t that whole ceiling, no ceiling, ceiling, no ceiling thing, which is what happens when I blink and I’m staring up at my ceiling. Not that what I was staring at was a ceiling to begin with, but still.

“Did I get drunk last night?” I asked myself. Only, I couldn’t remember last night. I couldn’t remember going to sleep, even. I remembered waking, but that was it. And I didn’t feel drunk. In fact, I felt great. Better than great, actually. Blissful would’ve been a good word for it. Light, too. As if I’d been weighed down and now I wasn’t. “Free at last, free at last, thank God almighty—”

“You can try, but He doesn’t seem to listen,” I heard, then jumped in place.

The man to my left grinned. He looked about my age, early thirties, give or take, nice looking guy, too. Very Bradley Cooper like, stunning blue eyes and all. He was prone. He was lying next to me. He was naked. I stared down at my body. I, too, was naked. I continued staring down. There was no bed. There was my body, there was his body, there was that shifting white. “Don’t freak out,” he said.

My heart wasn’t madly pumping in my chest and I wasn’t sweating, but I felt like I was freaking out, nonetheless. Especially because my heart should’ve been madly pumping and I generally start to sweat when I’m freaking the fuck out. All that is to say, I was FREAKING THE FUCK OUT!

“I’m freaking the fuck out!” I shouted his way. “Who are you? Where are we? Why is the wall and ceiling and floor shifting?” I blinked. It felt like I blinked, but I didn’t get the right effect again. “And where are my fucking eyelids?”

“You get used to that,” he replied.

I sat up. That is to say, I tried to sit up. Only, I didn’t think I was actually lying down, and you can’t sit up if you’re not lying down to begin with. “Stop the ride,” I squeaked out, “I want to get off.”

I was still staring at him. He was still grinning. “Give it a minute,” he said. “Takes about five minutes for all of it to right itself.”

“All? What all?” I continued staring. It seemed like a minute went by. I was no longer lying there. I was standing. He was standing next to me. The not-a-ceiling was now not-a-wall, and it was still shifting, and I was, duh, still freaking out, fuck and all.

“Max.” He held out his hand. I shook it. I felt his hand in mine. There was indeed comfort in that.

I shook my head. “I was born in one. And my mom had a penchant for making sure I was teased well into adulthood.” I let go of his hand. “Nord. My friends call me Nord. Otherwise, they don’t get a Christmas present.”

Rob Rosen is the a author of the award-winning novels Sparkle: The Queerest Book You’ll Ever Love, Divas Las Vegas, Hot Lava, Southern Fried, Queerwolf, Vamp, Queens of the Apocalypse, Creature Comfort, Fate, Midlife Crisis, Fierce, And God Belched, Mary, Queen of Scotch, Ted of the d’Urbervilles, and Sort of Dead, and editor of the anthologies Lust in Time, Men of the Manor, Best Gay Erotica 2015, and Best Gay Erotica of the Year, Volumes 1, 2, 3 and 4. 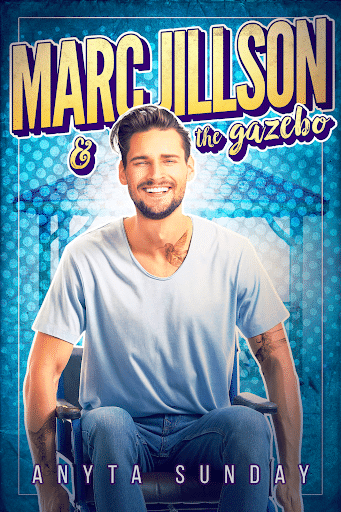 Want true, heart-throbbing romance? Put down the Cheetos, and stop being a jackass.

The question is, can I do it?

I’ve been an epic dick to my friends, my uncle. Him.

Travis Hunter. Photographer, econ-student, paraplegic. Can I redeem myself? Apologize?

Hunter seems to think so. Even roped me into saving his favorite gazebo from the bulldozers.

The confidence of this man amazes me. He’s no bullshit where I’m all bullshit. I throw up walls where he knocks them down.

He’s beautiful, too. Strong arms inked with hummingbirds, a wide teasing mouth, and blue eyes that read me like an open book.

He looks at me, and I look away.

These shivery feelings I have for Hunter? They can’t happen. I don’t deserve him.

Where did I put those Cheetos?

~ ~ ~
The books in the Love Inscribed series are standalone romances, and can be read in any order.
LIAM DAVIS & THE RAVEN: Liam & Quinn’s story
MARC JILLSON & THE GAZEBO: Marc & Hunter’s story

Warnings: mentions of past violence against one of the MCs (not on page)

“I want readers to enjoy a good, steamy romance with a sex-positive, strong MC (Hunter) who helps the other MC (Marc) come to terms with his past, and accept himself as worthy of love.”

Hunter’s soft utterance of my name followed me the rest of the evening. It felt promising. Like maybe I could start with a clean slate.

I stared at my computer. Did I dare go back on Demon-Slayage?

I groaned as I clicked into the game. I wanted to be on here badly.

Me: I’m not sure this is a good idea.

DaMage: In light of us knowing each other?

Me: It was more fun when you didn’t know the real me.

DaMage: Are you worried I’m judging you?

A bit about me: I’m a big, BIG fan of slow-burn romances. I love to read and write stories with characters who slowly fall in love. Some of my favorite tropes to read and write are: Enemies to Lovers, Friends to Lovers, Clueless Guys, Bisexual, Pansexual, Demisexual, Oblivious MCs, Everyone (Else) Can See It, Slow Burn, Love Has No Boundaries.

I write a variety of stories, Contemporary MM Romances with a good dollop of angst, Contemporary lighthearted MM Romances, and even a splash of fantasy. My books have been translated into German, Italian, French, and Thai.

Sign up for Anyta’s newsletter and receive a free e-book: http://www.anytasunday.com/newsletter-free-e-book/

You can also find Anyta here:

For information about new releases and freebies, follow her on BookBub:

Must be 18 to enter and win; open internationally.