New Release Blitz: Out of Time by C.B. Lewis

For Ben Sanders—traitor, thief, and temporal orphan—time is running out.

After three years as a fugitive, with the police task force led by Lysander O’Donohue and Jacob Ofori hot on his heels, Ben has to resort to desperate measures to evade capture and find the key to locating his missing father, lost in time for over two decades. With secrets and conspiracies at every turn, the net grows ever tighter around him.

Haunted by the people he betrayed, the loved ones he left behind, and the lives he ruined, it’s too late to stop now. But no matter what Ben does, there’s no escaping his past.

With this exciting conclusion to the Out of Time series, it is recommended to read the first four books for full enjoyment.

Chapter One
The house was unnaturally quiet.

It looked the same as usual: portraits of a family—mother and baby, father and toddler—on the walls, a scatter of Lego and jigsaw puzzles on the floor, a forgotten coat slung over the bannister at the top of the stairs.

The man walked onwards towards the staircase.

It was too quiet.

All he had to do was call out and break the silence, but he couldn’t.

That was what his dad had told him. He had done what he was told.

The front door was cracked open, a thin slice of pale morning light cutting across the patterned tiles on the hall floor. It stretched on towards the lab, which was impossible. The sun was too high for it to stretch so far.

The stairs creaked underfoot as he crept down. The tiles in the hall were cold. His clothes were soaked. He didn’t remember why. They were wet, and he was cold, and it was all too quiet.

He saw—did he?—the body. A sheet. A shoe on a foot from under it. He saw it. A glimpse. He walked closer, and the sheet was still there. He reached out and grabbed the sheet to see the face of the one who did it.

There was nothing there. No one. The sheet fell from his numb fingers, vanishing before it hit the floor, and he walked onwards.

The door was open, no longer secret. They had cleaned the bloodstains, but he’d heard them talking quietly when they thought he couldn’t hear, and the handprints were back, smeared on the wall. Whose? He didn’t know.

Light shone up from the basement. The walls were white where they weren’t red. It wasn’t silent down there. The electric crackle of power hummed around him as he made his way down. It should all have been bigger. When he was there the first time, it all seemed so much bigger. He remembered the crackle, too, and knew what it meant.

Their secret, something no one had ever known.

He crossed the floor of the laboratory, ignoring the computers and the information all over them. The sound was coming from the next room, and he knew what he was going to see.

The temporal gate connected, blazing with light. The man standing before it, barely more than a silhouette.

“We’re running out of time.”

The voice was familiar, but it was wrong too, not the voice he remembered. Too many years without. Too many years of his memories being worn away. He couldn’t remember it now, not exactly, not the intonation, not the lilt or the accent.

He tried to speak, but his throat was closing up. He reached out towards his father, trying to catch him before he did what he always did. His fingers passed through his father’s shoulder as if it was nothing more than a shadow; then his father stepped through the gate. The world blazed white, dazzling him.

“No!” He ran towards the gate only to collide with a solid wall. Wall on all sides. Enclosed. Trapped. He was somewhere safe. Safe and closed and dark and alone until Dad came for him. The door was sealed and there was no way out, and in the dark he screamed—

Ben Sanders jolted, sitting bolt upright, panting. Iron bands squeezed his chest. He twisted frantically towards the glowing nightlight on the stool beside his bed. Staring at it, he counted down from thirty until his heartbeat evened out, and he could breathe again. He always kept the lighting low throughout the studio in case the nightlight failed. A shaft of white cracked through the ajar bathroom door. Not dark. Never dark.

His sheets clung to him, soaked with sweat. He pushed them aside and got out of the bed on unsteady legs. It took more effort than he liked to make it to the bathroom. He sank to the floor to sit by the toilet. The porcelain was cold as he propped his elbow on the seat, his fingers sinking into his sweat-matted hair.

Every night, it was getting worse. He knew why. How could he not? With every day that went by, he took another step closer to the day that would ruin his life. Time, time, time. That was what it came down to.

His stomach clenched, and he vomited, acid burning in his throat.

He got up and filled a glass of water at the sink. His reflection seemed more like someone half-dead, pale, with deep shadows beneath his eyes. He needed to rest, but not now. Not with his heart still pounding and the faint echo of his father’s voice lingering in his ears.

There was still so much to do.

C.B. Lewis is small, Scottish and writes pretty much anywhere, any time. She loves to travel and tends to bring home at least four new plot bunnies from every trip she goes on. She’s very excited to continue the adventures of the Out of Time series. 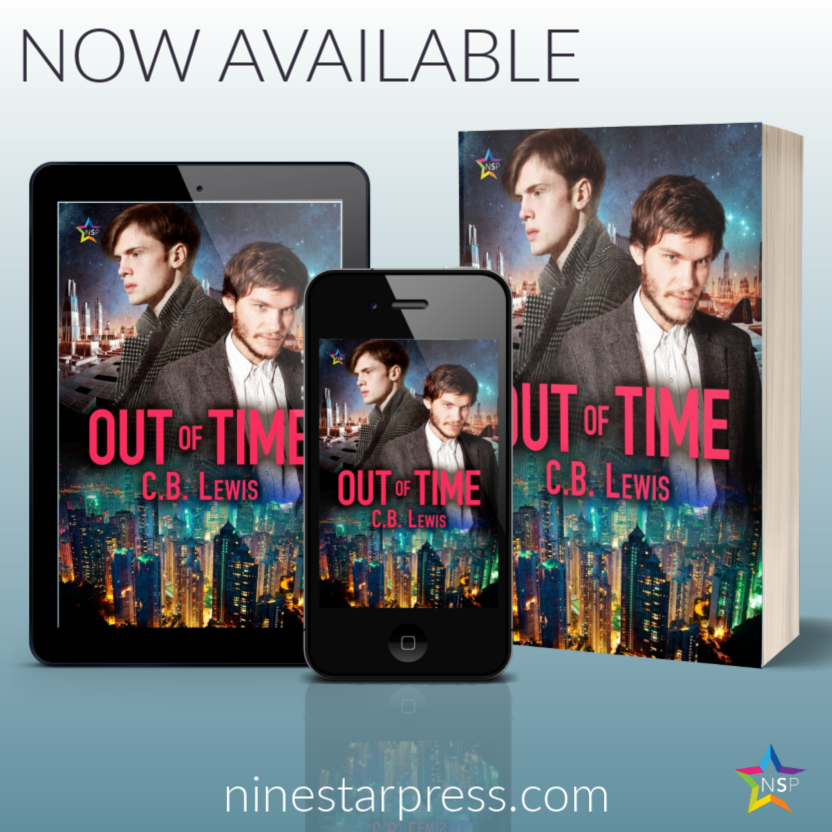