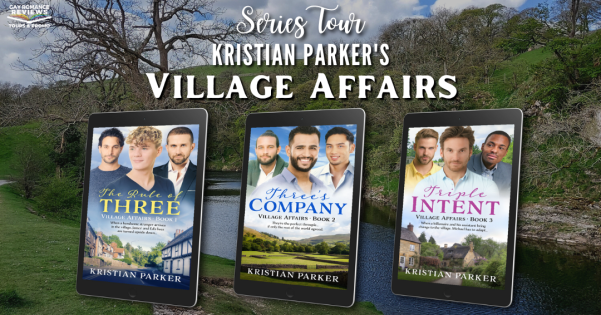 The Rule Of Three

When a handsome stranger arrives, James and Ed have to make a choice that will change their lives.

James Durkin is happy. He’s landlord of the pub, chair of the parish council and secret lover of his best friend, Ed Cropper. But Ed, tired of living in the shadows, dreams of living openly, something James can’t contemplate.

Then there’s Arthur Whittaker. When the handsome young primary school teacher comes to live in the village, he signals a future that neither James nor Ed ever saw for themselves.

But the small Yorkshire village of Napthwaite is a place that’s resistant to change, meaning the three men must be strong enough to forge their own path…

Will they overcome the odds—and tradition—to find the love they crave, or will their brave new world crumble to nothing under the pressure?

Reader advisory: This book contains instances of homophobia, and references to parental death and on-page drug-taking.

They’re the perfect throuple…if only the rest of the world agreed.

Will Johnstone’s father is desperately ill, and he races home from London to the Yorkshire village of Napthwaite to be with him. Almost immediately he meets cute postman, Hardeep and mysterious newcomer, Andrew. There weren’t handsome men like this in Napthwaite when he lived here…

Heat flares between the three very different men, passion they have no intention of resisting, or denying. But having their roots deep and their lives entwined in a small village is not like living in a bustling metropolis. And with domineering mothers, problem teenagers, sick fathers and someone’s past knocking at the door, the path of true love is anything but smooth.

Can Will, Hardeep and Andrew, three very different people, steer their relationship past the rocks and find a way into uncharted territory…together?

When a billionaire and his assistant bring change to the village, Michael has to adapt…

The future’s uncertain for Michael Fleming. He came to the sleepy Yorkshire village of Napthwaite a year ago as Thorpe Hall’s gardener, but now the Hall’s been sold…to billionaire hotelier Darryl Burlington.

When self-made Darryl and his handsome French assistant, François Vernier, come to set up the new property acquisition, they plan to find a willing third party to share their bed. Darryl and François aren’t together, but they like to celebrate success. But instead of indulging themselves in a treat after their hard work, they trigger events which no one could have foreseen.

This chain reaction Darryl, François and Michael leads to big changes in Napthwaite—and in all three men’s lives…

I have written for as long as I could write. In fact, before, when I would dictate to my auntie. I love to read, and I love to create worlds and characters.

I live in the English countryside. When I’m not writing, I like to get out there and think through the next scenario I’m going to throw my characters into.

Inspiration can be found anywhere, on a train, in a restaurant or in an office. I am always in search of the next character to find love in one of my stories. In a world of apps and online dating, it is important to remember love can be found when you least expect it.

To celebrate the Village Affairs Series, we are giving away an e-set of the series 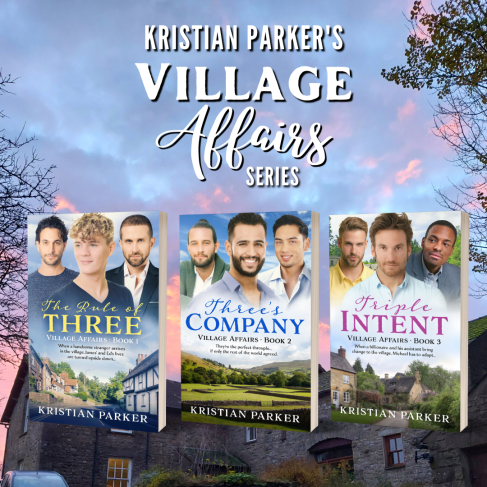