Release Blitz: Wood A True Lover’s Story by A.E. Via 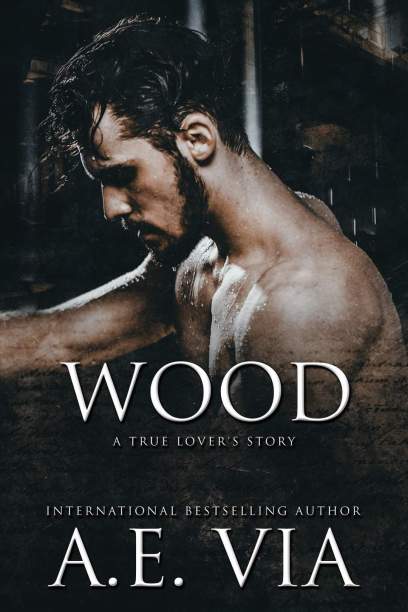 It’s been a long seventeen years but Herschel Wood Jr. is finally a free man and he’s looking forward to reconnecting with his old cellmate, Bishop Stockley, who promised him a place to stay and some help getting back on his feet. Wood had a good life once upon time when he’d owned one of the most successful tattoo shops on the Virginia Beach Oceanfront – until a fatal accident that was his fault cost him everything.

Now at forty-six years old, all Wood wants is to work in another shop on the beach and find a mature, easygoing man to settle down with. But when he gets to his new place and finds he has to share the small trailer with Bishop’s childhood friend, he wasn’t expecting a sexy, smart-mouthed brat that enjoys pushing a man to his limits.

Wood pressed in tight until there was only misunderstanding between them, his mouth mere inches from Trent’s parted lips. “You wanted to get a reaction out of me you annoying, immature little shit… now you’ve got one.”

Trent Armstrong has never been considered a catch. He’s a twenty-nine-year-old laborer, an ex-con, and not the easiest person to get along with. He’s used to being the one people cast to the side when they’re done with him. Everyone he’s ever cared about has walked out of his life without a backward glance, so he’s used to the loneliness. His foul mouth and quick temper are a great defense mechanism and an easy way to hide his hurt.

From the moment the tattooed, silver-haired man walked into the house there had been nothing but tension, side-eyeing, and sparks between them. Trent has always held back a side of himself that he’s terrified to explore, and without warning Wood’s voice, his maturity, that maddening scent, and even his damaged past all trigger feelings that Trent thought he’d buried deep long ago.

Trent went completely still when Wood dragged his nose over his forehead and down the side of his face. His voice was shaky, and his breaths were hot and swift along Wood’s throat. “What the hell are you doing?”

“I’m doing what you want me to do.” Wood whispered. “I’m playing your bullshit game, Trent.”

Note: This is a steaming agnsty, age gap, new-to-love romance. The True Lover’s Stories are connected standalones. Each title features a different couple but will contain previously mentioned characters.

No multiple pairings. No cliffhanger. Ends with a HEA.

Well, well, well. What do I have here? Wood sat across from Trent at the small dining table while Mike went over some important particulars in his one-page lease. Wood knew he should be paying attention, but he liked the way he kept catching Trent trying to steal a glance in his direction. Of all the stories he’d heard of the hot-tempered, quick-to-whup-a-man’s-ass Trent, he didn’t picture him with thick, peach lips or piercing, warm brown eyes that he kept shielded by a slight frown.

Wood kinda wished Bishop would’ve told his family a little more about him instead of leaving them guessing…and eventually surprised. That meant they also didn’t know why the government thought he deserved to lose seventeen years of his life. Great.

“Wood, your room is already furnished. That’s your own space. The living room and kitchen you’ll both share. However you want to split the groceries is between you two. The second bathroom has some pipe problems, so you guys will have to share the bathroom in the hall until I can get it fixed. You’ll divide the utilities half and half, and the rent is due on the first of the month, it’s late on the tenth. Don’t make me hunt your asses down for my money either.”

Mike spun the paper in Wood’s direction and pointed for him to sign under Trent’s name. “Everything seem copacetic?”

“Yep. Looks standard.” Wood had no clue what a typical lease looked like these days, but he signed it anyway. He had a roof over his head that didn’t include an overseer and a room he didn’t have to bolt to keep out thieves. Mike’s terms were fair; he didn’t seem like a conniving bastard. And if he was anything like his son, he was probably a damn decent guy. When Bishop told him that his dad was only fifteen years older than him and more like one of the guys than a father figure…he hadn’t been exaggerating.

Mike stood when they were finished with business and shook Wood’s hand again. “I wish there was another way I could thank you for what you did for my boy in prison. I know how hard he struggled when he and Trent got separated. Thank you. Thank you for being there for him when I couldn’t. You’re a good man.”

Wood was surprised at the sudden seriousness, and he struggled with receiving such high praise. He accepted the handshake with a tight nod, and Mike added, “We’re in our off-season at work, but let me know if you need some extra income around the spring. I’m sure I can get you on one of the crews.”

Trent hummed his agreement. “I’m sure I’ll have room on my crew this summer. If he can hack it.”

Wood’s eyes were locked on Trent. Is he trying to bait me? How cute.

Mike walked past the back of Trent’s chair and popped him in the back of the head. “Night, asshole. Thanks for the beers.”

“You’re welcome. I’ll just deduct it from your rent, you irritating piece of—”

“Trent!” Bishop barked. “Why don’t you show Wood around and tell him where his room is.”

Trent gave Bishop an incredulous glare, and Wood had to hold back the chuckle that threatened to escape. Besides, he had a feeling his new roommate didn’t like to be laughed at. Bishop said it might take a minute to get Trent to loosen up to the idea of them living together, but he was thinking it might take a lot longer than that.

Trent got up and motioned for Wood to follow him while Bishop pretended to be busy watching Edison stir the chicken stew. Trent pointed out the utility room, the hall bathroom, the closet, and linen closet. At the end of the short hallway, Trent leaned against the wall and pointed to a room with the door already open. “That’s you.”He thumbed over his shoulder. “This is me.”

“You always keep your door shut that tight?” Wood asked, noticing how close they had to stand in the confined space.

Trent scoffed. “Is there a reason you want it open?”

Wood couldn’t stop himself from staring. Damn, he liked the way Trent worded that, liked how loaded it was with suggestion whether the man realized it or not. “No. No reason at all.”

A.E. Via has been a best-selling author in the beautiful gay romance genre for six years now, but she’s no stranger to MM. She’s been an avid reader of gay literature for over twenty years before she picked up her laptop to place her own kiss on this genre. She’s also the founder and owner of Via Star Wings Books, having published a couple great, new up and coming MM authors.

She’s recently celebrated her 20th book anniversary, and is well-known for her hardcore, love hard, bad boy, alphas. However, she does like to push herself to step out of her comfort zone, exploring different tropes. She’s head over heels for gay romance and she has tons of more hot stories to tell.

Be sure to visit Adrienne on her social media pages and subscribe to her newsletter to never miss another release date!

Lucy and Molly knock out another funny and flirty romance

BTW: By the Way by Lucy Lennox & Molly Maddox

Another fabulous entry in this very sweet and funny series from Lucy and Molly.

Up this time is James, the lawyer from book one, and he finds love when he goes to close a deal on a rundown motel on the Cape.

What i really enjoy about this series, and especially in this book, is that there’s no unnecessary dramedy.

The tensions are created from situations which feel completely natural to the narrative.

Here it’s Sawyer feeling he wouldn’t be good enough to fit into James’ New York city life, while James is fearful he’s killed all his chances because of his involvement in a deal to buy the inn Sawyer loves so much.

There’s an easy pace to the story, it just flows beautifully from chapter to chapter and draws itself along to a deserved conclusion.

Thoroughly enjoyable and nicely steamy without ever going into overkill.

I’m interested to see how book four goes, as it will focus on Richard, James’s ex boyfriend, who seems superficial on the surface but who I suspect has much more to him.

That had one of the most gorgeous Epilogues I think I’ve ever read.

I’m pretty sure this was my first book by Edie and I have to say that it was a complete pleasure.

Her writing style flows and ebbs through beautifully constructed visual imagery and dialogue which connects the reader to the characters perfectly.

There’s a lot of talent needed to do that with a character who has to use a phone’s reading app to articulate his words because of a damaged throat but I totally got into Sage’s head in this book.

Antonio was a harder nut to crack but he also worked his way into my affections and I utterly adored the uniquely drawn and gifted bunch of family and friends which surround them.

There’s some angst but overall this really was just a gorgeous romance between two people connected through a life sacrificed.