New Release Blitz: To The Flame by A. E. Ross 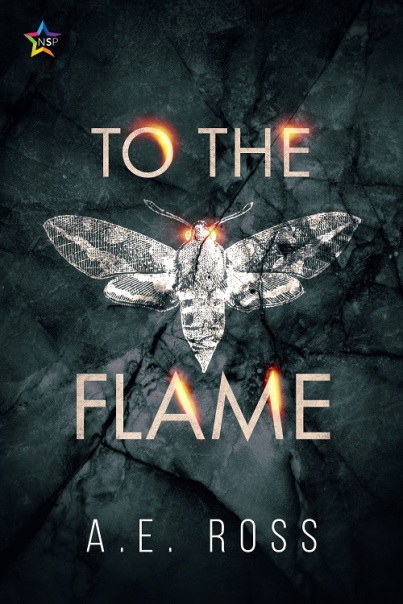 Seattle boy Emerson Oakley is about to find that the strangest thing about his first year at West Virginia’s Vance University isn’t the neighbor in the next dorm over, who ghosts him after one kiss. It’s the fact that he keeps having his life saved by a stranger who seems to know about each accident before it happens.

Morrie Crisp, whose moth-person powers finally emerged at the most inconvenient time, is just trying to figure out how to deal with their crush on the boy next door, and all the different ways they’ve seen him die.

As Emerson tries to get to the bottom of who his pre-cog savior could be, his relationship with Morrie becomes extra complicated as their undeniable attraction to one another becomes a liability to both. Even as Morrie struggles to keep Emerson safe, Emerson is intent on igniting the fire between them, into which Morrie is naturally drawn.

What is a reasonable response to falling in love when the world itself is without reason? Unfortunately, neither one of them has any idea.

With the sound of the school radio’s late-night show in his ears, Emerson Oakley pulled his wool-lined jacket more tightly around his broad frame and threw dirty looks at any shadows he passed, mean-mugging at would-be creatures waiting out there in the dark. Overhead, the campus clock chimed midnight, its toll reaching long and deep into the West Virginia night. Emerson clutched a stack of textbooks tightly under one arm, his free hand gripping the strap of his rucksack. By October, the school’s grounds had become a world of swirling fog. Frost was just beginning to lick at the blades of grass sitting neatly in between the cobbled walkways. The paths crisscrossed campus like a foursquare game. Just last month they had been full of hacky-sacking upperclassmen.

As a born and bred Seattle boy, Emerson was used to the sparkling mist that filled Puget Sound in spring, but the autumn weather in Appalachia was a different phenomenon altogether. It hung low, filling his nose and throat with damp cold as he made his way back to his dorm beneath flicking streetlights. His fingers were beginning to numb just a few steps in.

A loud crack rang out behind Emerson, causing him to jump a couple inches in surprise before turning around to see dazzling colors light up the sky. Some freshmen were letting off fireworks, probably to celebrate their newfound freedom to make bad decisions. The illegal rainbow starbursts snapped and popped in the sky over the astronomy building.

After reaching into his pocket, Emerson turned up the volume on his phone, letting the pop-punk singer’s smooth voice drown out any more unwanted jumpscare fodder. The song began to fade out as he crossed out of the quad and into the parking lot. His dorm was just on the other side of the empty gray stretch of pavement, and he could already see the golden glow from his next-door-neighbor’s room. He couldn’t hear the pounding bass that they loved to blast from morning to night, but he’d be in range soon enough. There was a reason he spent every night studying in the library instead of his dorm room. He didn’t know too much about the kid next door, but there were two things he knew for sure: they went by Morrie, and they fucking loved EDM turned up to 11.

“You’re listening to WVUX 69.1, The Voice of Vance. That was local band Rubric with their latest hit, ‘Risk Reward.’” The late-night host jumped in with perfect timing, his tone smooth as silk. As he continued with a recap of the week’s news, something flickered at the edge of Emerson’s vision. As he snapped his neck to the right, his breath caught in his throat. For a split second, he was certain he saw a dark shape on the roof of the nearest dorm building. The three-story brick building, Gryphon House, happened to be one of the earliest built on campus and was probably haunted, or at least that’s what the orientation tour guide had said. Of course, the guide was a bored junior, so he easily could have been making it up. Emerson was sure he had glimpsed…something. The large dark shape with flickering edges, host to two glowing red orbs that, ideally, were not eyes—or were eyes the better option?

Biting his chapped lip, Emerson turned away and kept walking, trying to focus on the words coming from his earbuds. “So, if you want to use the pool, you’re just going to have to wait until it’s been emptied and disinfected…for your own good. Oh, and one more thing—Emerson Oakley, watch your step,” the voice said just before another indie-punk hit began to play, coming in strong with the snare.

Emerson jerked his head up so hard his neck wrenched painfully. Scanning the empty parking lot, he took two nervous steps back. Just then, another colorful crack rent the sky above him, followed by a low whistle. It was the sound of a snapped power line slicing through the air and landing half-submerged in the puddle where he had been standing one second earlier.

Eyes wide, Emerson put a hand to his chest, a tight rush of anxiety beginning to cloud his brain in a familiar way. Music still pounding in his ears, he stared at the small sparks coming off the black wire. If he hadn’t taken those two steps back, he’d be fried. Panic rising in his throat, he let his logical pre-med brain take over and called campus security to let them know about the potential danger before continuing on to his dorm. This time, the music in his ears was drowned out by his own heartbeat as he swiped his key card and hustled up the stairs to the third floor.

Once he got into his room, the thump of his chest was drowned out by the heavy bass of Morrie’s EDM playlist. He basically knew the track listing by heart at this point. In a way, it was a comfort as he tried to get a grip on what had just happened. It was strange enough to get a cryptic warning from the college radio station, but he was certain that the warning had come seconds before the fireworks had actually hit the power line, assuming that was what had caused it to snap and swing into the puddle at his feet. How they could have called that shot, he had no idea. Emerson was pretty sure that the radio station was on the other side of campus.

He wriggled out of his heavy coat and flannel then stripped down to a sweat-soaked tee and gray boxer-briefs. It was hard not to think about what had just happened. He could have been deep-fried, his body burnt up and smelling like the hot dogs that the power company used to electrocute as an elementary school safety demonstration. Emerson ran his hands over his whole body just to make sure it was still there. He had always been barrel-chested with a soft, round stomach. Okay, he could admit he had a bit of an apple bottom as well, but he loved his body. If he had gotten his body fried up in a freak firework accident…well, he’d be dead and pretty upset about it. Sitting down on his worn forest-green patchwork quilt, he tried to sync his breathing to the rave beats from next door the way he’d learned in therapy.

He lay back on his bed and repeated that routine for several minutes until the fight-or-flight feeling flowed out of him and a reasonable calm remained. After grabbing his towel and toiletries, Emerson slipped out his door and down the hall to the bathroom. He did his best thinking in the shower, and boy, did he need a second to decompress.

The most important thing about the dorm bathroom was not to focus on the floor. If you did, it was over. All kinds of weird shit got caught in the grout that lined the beige tiles between cleanings, and it was honestly better if you could just keep your head on a swivel and ignore it altogether.

The second-most-important thing about the dorm bathroom was not to focus on anybody else either. To be fair, that had been Emerson’s modus operandi in every shared shower room he’d ever used: junior-high gym class, JV football, the YMCA pool. But it was especially vital now that he was in a university with all-gender facilities. He was proud of Vance Uni for living in the twenty-first century, and the last thing he wanted to do was make anyone feel weird or unwanted. That said, the scene was deserted, so he turned the water on as hot as it could go and divested himself of his earthly garments. The good burn of too-hot water relaxed his shoulder muscles, despite the shitty water pressure.

With a clear head, he convinced himself that there was surely a reasonable explanation for the DJ’s timely omen. Though, even if there was, it still didn’t do anything to ease his mind about the strange shape atop Gryphon House, which was still stuck in his mind.

After fluffing his hair dry and slinging a towel around his waist, Emerson made his way back down the hall to his room, just in time to cross paths with the Ghost of Electronica. Morrie was trying to unlock their door with a slice of pizza in one hand and a two-liter of soda wedged under their armpit. Emerson walked past and avoided glancing directly at Morrie, feeling irritated that they left their music playing even when they weren’t in the dang room. Or at least, that’s what he told himself. Certainly, his animosity for Morrie was all about the volume of their music and absolutely not about the way they:

1. Wore those tight black skinny jeans with the knee-baring holes, and
2. Hadn’t spoken to him once since that kiss during Orientation Week.

Obviously, neither of those things factored into the equation at all, and it was definitely not true that either of those two things ever made it harder to sleep than the pounding of a drum machine.

A.E. Ross lives in Vancouver, B.C. with one very grumpy raincloud of a cat. When not writing fiction, they can be found producing and story-editing children’s cartoons, as well as producing & hosting podcasts like The XX Files Podcast.

Their other works have appeared on Cartoon Network, Disney Channel and Netflix (and have been widely panned by 12-year-olds on 4Chan) but the projects they are most passionate about feature LGBTQIA+ characters across a variety genres. 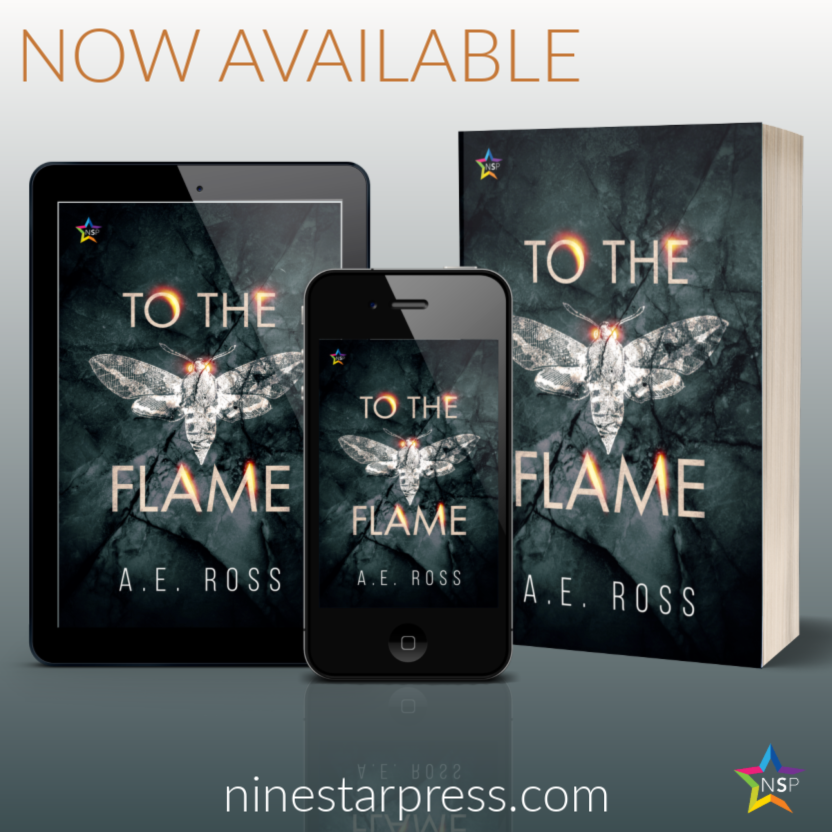