The pestilents are trying to kill him.

He’s pretty sure the Water Weaver wants to kill him as well.

That night was earth shattering.

And now he needs to figure out how to keep both men safe and his.

Calder doesn’t want to fight his attraction for the Fire Weaver any longer, but they can’t really be soul mates, right?

And what about Gio? The sexy man gives him such a feeling of completeness and peace.

Could one man really have two soul mates?

Can’t he just have them both?

“Nothing feels icy to me,” Lucien murmured, while the fingers on Calder’s waist tightened.

He suddenly felt bad. He was intruding like an annoying little brother. Yes, his intention had been to stop Lucien from hitting on this guy, but now that he was standing there, he felt how wrong it was. What Lucien did and who he slept with was none of his business. He was supposed to be working on getting rid of the bad blood between him and Lucien, not making matters worse.

“None for me,” Calder said softly. “I’ll grab the drinks and get out of your way.”

Gio surprised him by cupping the side of his face with a warm calloused hand. “Oh no, sweetness. We don’t want you going anywhere. You’ve got to stay.” Gio looked over Calder’s shoulder at Lucien. “We want him to stay, right?”

Calder tensed, waiting for the rejection, but Lucien shocked him even more by pulling him in tighter so that he could feel Lucien’s groin against the small of his back. Those long fingers slipped down from his waist to caress his hip bone, sending the most delicious tingles all over his body. “Stay. Have a shot with us,” Lucian pressed. His voice was warm and so very tempting. Calder couldn’t remember ever hearing Lucien talk to him like that. He wanted to live in that voice. Just curl up in it like a warm, handmade quilt.

Releasing him, Gio turned to the bartender as she delivered Lucien’s and Calder’s mix of drinks and ordered a round of shots. Calder didn’t hear what he’d ordered exactly because Gio had also slotted himself better against Calder, causing his brain to short out. He was now in the one place he’d never thought he’d be—a Gio-Lucien sammich. Even with all their clothes on, it was now his favorite kind of sandwich. He would happily eat it every day for the rest of his life.

Calder was too tongue-tied to manage words. He nodded. At least he thought he nodded. He must have done something, because Gio’s smile grew wider. A second hand landed on his hip right where Lucien’s

The shots arrived, and Gio slid one over to Lucien before physically placing one in Calder’s hand as if he knew that his brain wasn’t in control of his body any longer. He watched as Gio clicked his shot glass on Lucien’s and then Calder’s. Tipping his head back, he sent the amber liquid down his long, sexy throat. Calder did the same without a thought. The burn was enough to wake him out of his stupor.

Sucking in a harsh breath, he coughed several times while slamming his shot glass on the bar. Gio grabbed his hand again and shoved a drink into it. Without thinking, Calder sipped it, relieved that it was his gin and tonic. The addition of more alcohol to his system probably wasn’t the smartest, but at least it had gotten rid of his coughing.

When he could breathe, he took a deep drink and set the glass on the bar to find Gio smiling at him while Lucien’s hand continued to dig possessively into his hip.

You okay?” Lucien inquired. For once, the question didn’t sound spiteful or mean. There was genuine concern in his tone.

Of course he’s okay. What are you drinking, sweetness?” Before Calder could answer, Gio leaned in and licked his bottom lip, sucking it into his mouth for a second, then releasing it with a wet pop. “Mmm…gin and tonic. Not bad.”

Calder barely heard the words. It was just a rush of blood past his ears as it raced to his steadily hardening dick.

As Gio moved away, he reached past Calder and pulled Lucien close. “And what are you drinking?” Calder watched as Gio licked his way into Lucien’s slack, welcoming mouth. He didn’t know what turned him on more—actually kissing Gio or watching Gio kiss Lucien. It defied all logic, but it was clear that his libido had zero interest in logic. He only wanted to know all the wonderful things Gio could do with his mouth.

Gio released Lucien and licked his own lips slowly. His dark eyes had turned black as his pupils dilated with desire. “I can tell this is going to be a fun night already. I suggest we head to my place so we can get more comfortable and less likely to be arrested.”

We? Calder croaked out. 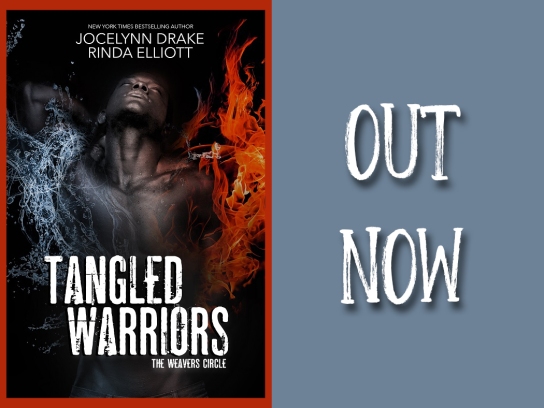 Well that was an epic instalment in this fab paranormal series

When the Fire Weaver Lucien Cummings first appeared it was obvious from the start he would be everything his element proclaims.

He’s prickly, he’s quick to temper, he’s gorgeous and he knows it and he’s certainly not willing to put up with the arrival of the Water Weaver Calder Saito.

Of course, Lucien isn’t willing to examine quite why Calder’s presence aggravates him so much but the rest of the Weavers – Grey in particular – are more than aware that it’s a spark of attraction flowing between the two.

When they run into Gio Russo in a bar it becomes blindingly clear to all that the reason for all the emotions flying between them is because they’re soul mates. They just needed their other one 😁

With Tangled Warriors Jocelynn and Rinda really lay down the heat. Lordy be, Fire and Water produce ALL THE STEAM! The three of them are so amazingly connected, it’s not just the sex, although that’s explosive, but they instantly click.

Gio buffers the antagonistic elements between the two Weavers but he’s not just there as a fill-in. He’s absolutely vital to their happiness and it becomes very obvious that he’s landed in a situation he doesn’t know what to do with because he’s been burnt by a poly relationship before.

There’s a lot of humour in this entry, even though the stakes are getting higher and higher as the pestilents have kidnapped the Air Weaver and the goddesses can’t track his location.

It’s probably got the most smexy times as well, but it fits into the narrative smoothly as the three men’s interactions provide the set up for a couple of encounters with the pestilents that really gets the adrenaline pumping.

Gio’s family are an absolute riot, I loved them so much, and as the series long story arc draws nearer its end, things really do kick up a gear. It’s all actions go for the final quarter of this book as the plot drives the Weavers and their mates into an all-out epic rescue of young Hale.

So now we’re down to just one book to come, I can’t wait for Hale’s story, he’s much younger than the other guys and seems to be quite lost. But he has a bit of a cheeky nature and I’m intrigued to find out who his unconventional mate is going to be! 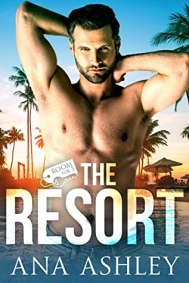 The Resort by Ana Ashley

This was an interesting and fun ménage romance set on an island resort.

Although the narrative felt a bit jerky at times, overall the storyline itself felt like it progressed at a great pace and with accurate reflections of the feelings of each of the three men involved.

I liked the dynamics between Mal and Griff as a pair, and then the way they expanded their behaviour to bring Jake in also worked well. I never felt a sense of third wheel or just a bit on the side from them.

There’s also great communication throughout the book, thankfully no silly dramady from misunderstandings or lack of conversation, I also appreciated that the major plot points were more related to outside effects or pressures and weren’t just relationship mess-ups.

It’s ridiculously steamy too, at times perhaps a bit too much, but there are also some great conversations and just couple/throuple time where they’re connecting in other ways outside of sex.

The surrounding cast of characters are really well drawn out, as is the setting, it felt like a solid, real place that you could sense the family feeling of those involved in the business and I adored Jake’s Uncle Frank and his cousin Gabe.