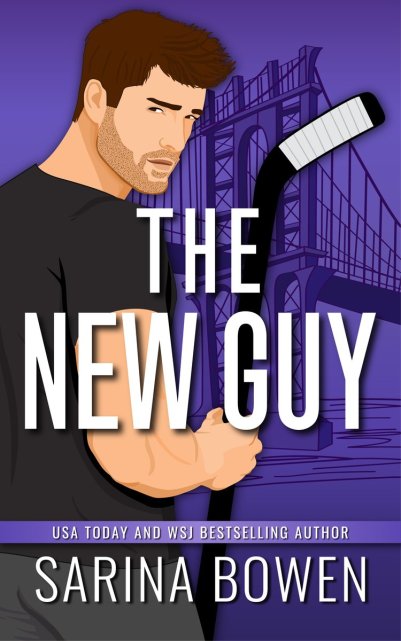 My name is Hudson Newgate, but my teammates call me New Guy.

That was my nickname in Chicago, too. And Vancouver. That’s what happens when you keep getting traded. Brooklyn is my last chance, especially after my poor performance last season.

What he doesn’t do is hook up with the other new guy—a hot athletic trainer who lives in my building. Gavin needs this job with my team. He’s a single dad with responsibilities.

We can’t be a couple. My arrogant agent–who’s also my father–will lose his mind if I’m dating a dude. And my team needs me to score goals, not whip up a media circus.

Too bad Gavin and I are terrible at resisting each other…

A New Englander whose Vermont ancestors cut timber and farmed the north country in the 1760s, Sarina is grateful for the invention of indoor plumbing and wi-fi during the intervening 250 years. She lives with her family on a few wooded acres in New Hampshire.

Sarina’s books are published in more than a dozen languages with fifteen international publishers.

Release Blitz: The Viking and the Drag Queen by V.L. Locey

The Viking and the Drag Queen | V.L. Locey 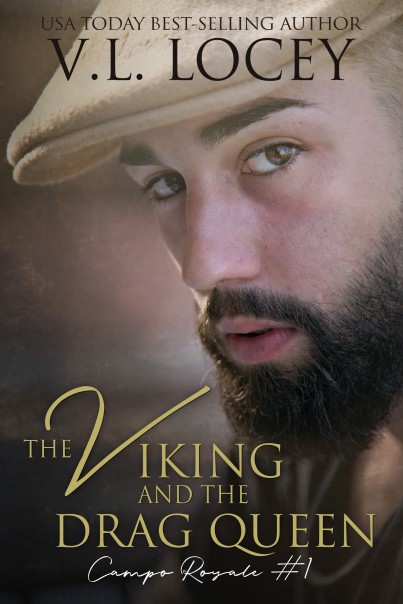 Who will emerge the victor on the battlefield of love?

Tyr Hemmingsen had his life mapped out at a young age. The only son of the late Danish hockey great, Elias Hemmingsen, Tyr has always done his best to follow the plans his father had laid out for him. Finish school, make it into the pros, become team captain, find a biddable young lady to marry, and win a championship so the Hemmingsen name lived on eternally on the side of a massive silver cup. Like the good son he is, Tyr has done as his father wished, no matter how it peeled away layers of his true self.

Then, all the neatly placed supports that hold up his so-called life come crashing down during a night on the town. Tyr might be known as the “War God of Wilmington” on the ice, but there’s no battling the effect Gigi Patel LeBay has on him.

Elijah McBride lives for the spotlight. As Gigi, he bewitches and bedazzles the crowds at the Campo Royale Club. His vibrant stage persona is the face he presents to the world. Underneath the rouge, eyeliner, and lipstick is a young man who still feels the sting of his parents’ disapproval and rejection of the son who wears wigs and dates other men.

With his drag family and older brother in his corner, he’s finally found peace in his life. Until the fateful night a massive hockey player shows up at the club. There’s a world of hurt in Tyr’s soft brown eyes, and Eli finds himself falling for the big man, despite all the barriers he’s built around his tender heart.

The Viking and the Drag Queen is an opposites attract gay romance with heavy checking, lipstick worship, an out and proud queen, a closeted athlete, family lost and found, twink/jock, a new beginning, and a well-cinched happy ending.

(Not necessarily in that order.)

She shares her life with her husband, her daughter, one dog, two cats, a flock of assorted domestic fowl, and two Jersey steers.

When not writing spicy romances, she enjoys spending her day with her menagerie in the rolling hills of Pennsylvania with a cup of fresh java in hand.

A Drag Queen and an ice hockey star – sign me up! 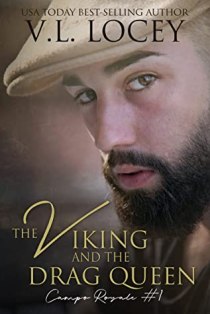 The Viking and the Drag Queen by V.L. Locey

This was a fabulous introduction to Vicki’s new series featuring a Drag Queen bar and its inhabitants.

Book one has a touch of the familiar as well, it includes a closeted ice hockey player in the minor leagues, and the utterly delightful Gigi Patel LeBay aka Elijah McBride, the sweetest and sassiest Queen to grace the stage of the Campo Royale.

There is a very strong sense of family in this book, not only from the found family at the club, but also from Elijah’s brother Hank, who has championed him in the face of parental disapproval which forced Elijah to leave home when he was just 16.

Hank, once he left the Marines, went searching for his baby brother and has had his back ever since and I really loved their strong bond. Before Hank found him, Elijah found his home with Mother Patel and the rest of the gang at Campo Royale.

I loved Mother (and cannot wait for book two, which is her story), she is fiercely protective of her girls and wary of the motives for why ice hockey giant Tyr Hemmingsen is coming back to the club. Closeted jocks only bring heartache she warns Gigi.

But Tyr’s different. The attraction between the two is off the charts hot. He’s under insane personal pressure due to a promise he made to his dying father and this drives a lot of the narrative.

For me, Vicki pitches this perfectly, he doesn’t want to hide Gigi or Elijah, but he’s afraid he’ll fail his promise if he comes out and his ice hockey career implodes. I liked the way the narrative unfolds with this plotline and it felt genuine.

This book just gave me a big smile the whole way through, even with the troubles on the way and I firmly believed in their long term future!