For Dominick and Alfie, it feels like they’ve only just settled into life at Balcarres House when an urgent letter from an old friend has them racing back to London. However, they’re not returning to Alfie’s swirling ton of money and nobility, but to the dark underside of the city that Dominick knows all too well.

In a desperate race against time, they’ll have to walk streets that Alfie barely remembers and Dominick hoped to forget. Their return brings up terrors better left in the past and for one of them, the strain may be too much to bear.

Under the shadow of the workhouse, they’ll have to act quickly to stop a killer or the lives lost may be their own.

Book One: His Lordship’s Secret 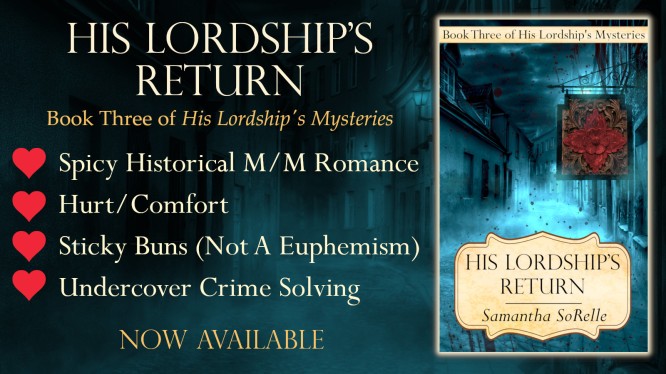 Most likely, however, it was the mouth around his cock.

“M’Nick?” he murmured groggily, trying to see anything in the pre-dawn light.

He received an affirmative hum in answer that sent shivers running through him. He threw his head back against the pillows as Dominick’s tongue laved against the underside of his cock, tracing the vein there.

Alfie wasn’t even fully hard yet, barely awake and unaware which way was up or down. He gripped the sheets, digging into the mattress as the rich fabric twisted between his fingers.

Dominick exhaled heavily through his nose in either a laugh or a sigh. The hot gust of breath against Alfie’s groin had the opposite of a calming effect. Dominick pulled back tortuously slowly, keeping up a light suction all the while, until Alfie nearly ordered him to get back to it just to stop the maddening contradiction of sensations.

Before he could gather the words to say anything, Dominick released him with a wet pop. Alfie breathed a sigh of relief, only to gasp again when he felt the press of lips against his leg, a series of kisses dappled across the sensitive skin one by one. Then that sinful tongue began to trace shapes against his inner thigh. D…o…m…

Finally untangling his hands from the sheets, Alfie lifted the covers. Dominick looked up at him like an animal exposed in its den. Blinking, he pressed a kiss to Alfie’s leg, dotting the “i”.

“I did until someone rudely awoke me.”

“Rude, was it? Bold words from a man completely at my mercy.”

Alfie didn’t even try to pretend those words didn’t flare something deep inside of him. Still, it wasn’t good to let Dominick have his way too easily. He was cocky enough already, no reason to add fuel to the fire.

“At your mercy, am I?” Alfie countered, letting the covers fall around Dominick’s shoulders. It took most of his composure to affect a sceptical air as he reclined back decadently. “From my vantage point, things look rather different.”

“Oh, really?” Dominick flexed his fingers. It was only then that Alfie realised Dominick’s arms were wound under and around him, his fingers digging into the tops of Alfie’s buttocks. Coiled around him like that, Dominick had him firmly ensnared and they both knew it. Still, Alfie couldn’t help but notice that he was being careful not to rest any of his weight on Alfie’s injured leg.

“Really. To me it looks like you’re exactly where you belong.” The realisation gave more fondness to Alfie’s tone than he intended. He waved a hand loftily. “Now that I’m awake enough to enjoy it, feel free to return to sucking me off at your leisure.”

Samantha SoRelle grew up all over the world and finally settled in Southern California when she soaked up too much sunshine and got too lazy to move.

When she’s not writing, she’s doing everything possible to keep from writing. This has led to some unusual pastimes including but not limited to: perfecting fake blood recipes, designing her own cross-stitch patterns, and  wrapping presents for tigers .

She also enjoys collecting paintings of tall ships and has lost count of the number of succulents she owns.

Alfie and Nick continue to be swoony in this Regency mystery 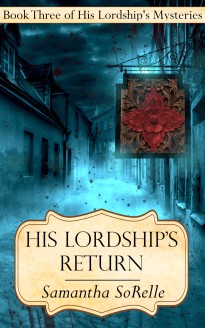 His Lordship’s Return by Samantha SoRelle

Oh this had a really interesting premise which cleverly pulled Alfie and Dominick back into the stews of London and their old life.

This gave excellent reasons for the tension to build up not only with the suspense part of the plot, but also with Alfie and Nick’s relationship.

The mystery itself turns out to be a fairly prosaic one, greed and desperation are powerful motivators after all, but it was still enjoyable.

Alfie and Nick continue to be a mix of super swoony, seriously sexy and annoyingly stubborn at times but I truly love them as a pairing.

There’s some super interesting information about Nick’s background revealed towards the end of this book so I’m eager to learn more.

As has been the case with all three books, some excellent research means you get a very clear picture of the time and location the story takes place in.

I hope Sam continues on with Alfie and Nick’s adventures as amateur sleuths.

Release Blitz: Much Ado About Lady Macbeth by Rebecca Cohen

Jacob Milner might have the face of an angel and the legs of a sinner, but his poisonous tongue would taint even the prettiest visage.

David Bell has risen from the London slums to be one of the up-and-coming stars of the King’s Men, the company of players at the Globe theatre. On the cusp of being too old for female roles, he yearns to play one more part before he leaves the skirts behind: Lady Macbeth. But he is not alone in that desire, and his nemesis, Jacob Milner, a soft-bellied popinjay who has never known day’s work in his life, is also vying for the part.

Sparks have flown between them before, but the fiery barbs and risqué name calling are hiding a different passion. But even if they do manage to put their animosity behind them, Jacob has another problem, his father is trying to marry him off to the daughter of Baron Runcorn.

REBECCA COHEN spends her days dreaming of a living in a Tudor manor house, or a Georgian mansion. Alas, the closest she comes to this is through her characters in her historical romance novels.

She also dreams of intergalactic adventures and fantasy realms, but because she’s not yet got her space or dimensional travel plans finalised, she lives happily in leafy Hertfordshire, England, with her husband and young son.

She can often be found with a pen in one hand and sloe gin with lemon tonic in the other.

With contemporaries, historicals, sci fi and fantasy in her back catalogue, there should be something for every taste in Rebecca’s work.