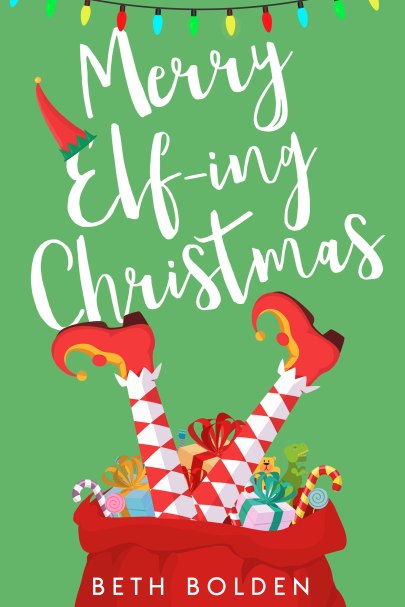 Aidan might be a bad elf, but he’s never been naughty.

Aidan has always landed on Santa’s nice list, thank you very much. But that doesn’t mean he’s cut out to be a North Pole elf; instead of worrying about the dwindling magic of Christmas, he’d much rather be back in Tir na Nog, calculating where the next end of the rainbow is going to land.

Instead he’s freezing his butt off in Santa’s sleigh.

His situation seems grim despite all the decking the halls, until on Christmas Eve, during a milk and cookies run, he meets Dexter, an engineering student.

They couldn’t be more different, and Dexter couldn’t be more forbidden, but Aidan is drawn to the handsome human anyway. Over the next year, their emails start out as a entertaining way to pass the time in all his interminable elf meetings, but soon, hearing from Dex becomes the very best part of his day.

And when they meet up on the next Christmas Eve? Aidan and Dex discover that their infatuation is so much more than just attraction. If they believe in each other and in the love they share, together their magic might be powerful enough to save Christmas.

Aidan was supposed to be in Ireland.

He was supposed to be counting golden coins, buffing cauldrons and helping his boss, the vice president of Leprechaun Operations, triangulate where the end of the next rainbow would land.

Instead, he was in Santa’s sleigh.

Currently freezing his balls off.

His friend Ronan had said that “weirder things had happened,” but Aidan wasn’t sure that there was much weirder than at the young age of sixty-seven discovering that he wasn’t meant to be at Tír na nÓg, but instead that he’d apparently been born under a unique northern star, under a particular set of circumstances—the same circumstances that a North Pole elf had once foretold would produce the Elf Who Would Save Christmas.

AKA the Christmas Savior.

Aidan was flattered, but the truth was, he didn’t want to save Christmas.

He wanted to find the end of the next rainbow.

Santa—no, Aidan reminded himself, Sam, as he’d introduced himself a few weeks back, with twinkling blue eyes and a welcoming smile—turned to him. “Want to stop for a snack?” he asked.

Aidan actually didn’t. He wanted to finish this interminable night and get off this sleigh and stop shivering, finally.

The magic of Christmas blah blah blah had lasted just about as long as it took for that first blast of arctic air to sneak up the back of his fur-lined cloak.

“Sure, we could get a snack,” Aidan said instead, because he was supposed to be assisting, and as Edmund, head of the North Pole elves, had told him when he’d pulled him aside for one last hissed, hurried set of instructions, that meant Santa got whatever he wanted.

“This night,” Edmund said in that annoyingly stentorian voice of his, “is for Santa. It’s Santa’s night.”

“Sam,” Aidan had responded impudently, earning him one of Edmund’s trademark frosty glares. “He told me to call him Sam.”

Edmund had sniffed, clearly unamused. “If that is what Santa said, then so be it.”

He’d learned that much during his last six weeks in the North Pole; Santa’s word was freaking law.

Even the leprechauns hadn’t wielded quite so much power.

But then with Sam, it wasn’t really power. He ruled with good old-fashioned love, inspiring an adoring crowd who would gladly trample anyone who didn’t feel the same.

The good news was that up ’til now, Aidan had managed to keep his apathy under wraps.

If Edmund or any of the other North Pole elves ever found out about it, he was screwed.

Sam pulled the sleigh, powered by its flying doohicky—Edmund had forwarded him the complicated plans that he’d glanced over and understood exactly zero of—down through the clouds of Chicago, snow thick on the ground.

Somehow, eventually he’d have to actually be able to take the sleigh apart and put it back together, or so Edmund had told him, but he’d been given a pass since it was just his first year. Aidan wasn’t particularly looking forward to it.

Invisibility was one of the elves’ greatest strengths, and their camouflaging magic helped keep the sleigh under wraps. It was the one thing the North Pole and the Tír na nÓg elves had in common: they were really good at making things disappear.

Still, you had to be careful, as Edmund had lectured Aidan about a dozen times. The sleigh might be invisible, but if they landed in a snowbank, the tracks would show. And if anyone ever bumped into it, the invisibility would fade, abruptly, exposing their secrets to humans.

AKA The Worst Thing Ever.

A lifelong Pacific Northwester, Beth Bolden has just recently moved to North Carolina with her supportive husband. Beth still believes in Keeping Portland Weird, and intends to be just as weird in Raleigh. 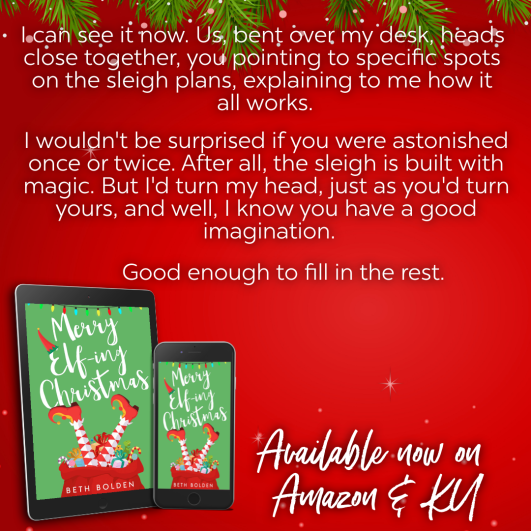 To celebrate the release of Merry Elf-ing Christmas, Beth’s giving you a chance to win:

A signed paperback of Merry Elf-ing Christmas (US Winner)

A No-Strings Noel by Annabelle Jacobs

A week of no-strings fun in a winter wonderland setting. No consequences, no expectations, no hurt feelings. Right?

Finding his boyfriend in a compromising position leaves him with a week off work and no holiday to go on.
A night of vodka, ice cream, and his sister’s sympathetic ear is the only way to deal with it.
It’s also how he finds himself on holiday alone a few weeks later, at an English holiday village in the countryside, surrounded by Christmas cheer and happy families.

He’s expecting a week of relaxing days and early nights, doing his own thing, and taking some time for himself. And hopefully finding some festive spirit along the way, because it’s sorely lacking at the moment.

What he’s not expecting is Dom.

Coming to somewhere so familiar soothes his broken heart after yet another failed attempt at finding someone to settle down with. He’s ready. They never are.

Seeing a lost-looking stranger on the first day of his holiday triggers his protective instincts, so he steps in to give him some helpful advice.
Who knew that advice would mean they end up spending the day and then the whole week together? But he figures a holiday fling is exactly what he needs to get through this slump: no expectations, no misunderstandings, no heartbreak.
Or that was the plan.
He knows Henry wants more, but he doesn’t trust himself where his heart’s concerned.
He doesn’t trust Henry not to break it.

A Christmas MM romance featuring a meet-cute, a sexy holiday fling, a meddling but awesome sister, a teeny bit of angst, and a festive HEA. 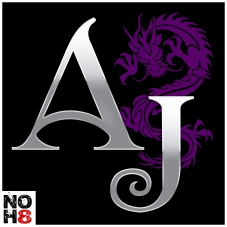 Annabelle Jacobs lives in the South West of England with three rowdy children, and two cats. An avid reader of fantasy herself for many years, Annabelle now spends her days writing her own stories.

They’re usually either fantasy or paranormal fiction, because she loves building worlds filled with magical creatures, and creating stories full of action and adventure.

Her characters may have a tough time of it—fighting enemies and adversity—but they always find love in the end.

What happens after the holiday fling is over?

A No-Strings Noel by Annabelle Jacobs

Oh I loved that. Most romances start with two people meeting, getting to know each other and build up to the hot sex.

Here instead we have a holiday encounter which is jam packed with delicious sparking steamy chemistry-filled sexy times between two men who start off thinking it’s going to be a no strings fling.

Of course, it quickly becomes clear there’s loads more feelings involved than either expected but both Henry and Dom are still dealing with breakups that left each of them bruised.

What I liked the best about this was the lack of over the top drama or angsting. Both men go home knowing they want more but being afraid to ask for it.

Instead, there then starts a sweet section where they get to know each other over text messages, talking to family and friends about the situation and mostly acting like grown ups.

The tension point arises in a believable way and the solution, while perhaps a little convenient still completely works within the narrative.

For most of this book we are only with Henry and Dom but it never felt restricted, I loved reading about their activities outside the bedroom as much as those with no clothes on 😁

It’s also subtly funny too, never taking itself too seriously, and I loved the build up to their reunion and the Epilogue is fab.