A bit lacking in tension but still an overall enjoyable romance

I enjoyed this one but it was definitely less tension driven than the others in the series have been.

That’s not to say that it wasn’t a good narrative though, I did still love the setting and I adored all the stuff with Micah’s job as a marine biologist.

I also really appreciate it when authors have strong female characters and don’t make ex wives of girlfriends into complete witches.

Tabby and the kids were a nice presence without being overwhelming or distracting the focus from the new relationship.

Loved seeing all the Venom guys and I liked that Daniel didn’t have some unbelievable impact on his new team, but felt realistic about the challenges of moving to a new place.

Overall another successful entry in this sports romance series from Avon and Piper.

#ARC kindly received from the publisher Carina Press via NetGalley in return for an honest and unbiased review.

It’s rare for me to read a Young Adult book, I find myself getting annoyed with the immaturity of most 18 to 21-year-olds, however in Part I of this book, at no point did either Alex or Noah irritate me.

I did find myself occasionally frustrated with both of them once they started their relationship but that was more down to lack of communication, and I find that frustrating irrespective of the age of the MCs!

However, I also found them both completely endearing, Alex being far more than the spoiled rich boy he was presenting to the world and Noah’s sweetness providing a perfect foil.

By the end of Part I my heart was breaking for both of them, while I was also curious to know what caused the specific issues which cropped up at that time.

I was very glad there wasn’t a long wait to reunite them in Part II and I absolutely adored Noah’s friend and work colleague Hannah. I do love when there are strong and supportive female characters in an MM romance.

Did I like that there’d been a 10 year gap and that neither had tried to find the other, not a jot, but when I discovered Noah’s reasons, while there is very much an element of martyr syndrome I think it was justified. I also appreciated the unique reason for why Noah had left Alex 10 years earlier wasn’t an inconsequential one.

The path back to happiness is relatively smooth, and I again really appreciated how there was no messing about with communication once they reunited.

There won’t be any spoilers from me, but it felt utterly believable, the cause is one that’s close to my heart and I liked that it was treated with the seriousness it deserves and the awareness of the rarity of Noah’s position.

I got the warm and fuzzies with their second chance relationship though and I loved how passionate they both were. I also thought there was considered effort put in to making neither Noah’s mother, or Alex’s father villains they’re both just flawed humans who are doing what they think is right or were unable to verbalise their feelings.

So that’s two out of two for Briar and I can’t wait to see what common MM tropes get twisted next!

First love can save you … and ruin you …

Eighteen-year-old Noah Rothenberg spent the perfect summer with his first love, the charming and seductive Spiro. He fell head over heels in love from what started as a clumsy crush.

But that was twelve years ago. His relationships since have been spectacular failures because of how things ended with Spiro. If he has any hope of moving forward, he needs to find Spiro and get some closure … even if he has to fly halfway around the world to do it. Too bad he instead finds himself falling—again—for the man who ruined him for all other men.

Love isn’t an emotion Spiro Papadopoulos entirely trusts anymore. He’s far too pragmatic for that. His focus these days has to be on his art and caring for his ailing mother. Being with Noah again is easy and feels so right … but is it love? Spiro isn’t sure. Besides, with his entire life being tied to Greece and Noah’s to New York, love might just be a luxury neither of them can afford.

Can Spiro and Noah overcome the oceans and years between them—or will their second chance at love end as badly as their first?

“Good morning, Mr. Rothenberg.” Eros put a hand on his knee to steady himself as he stood. Aloof in the shadows, Spiro held his gaze on him. Noah couldn’t look away as Spiro’s eyes washed over him from head to toe. Were they brown or green? Afraid he’d stared too long, he broke eye contact, his eyes sweeping past the visitor’s long dark sideburns that cupped his ears.

“Sorry to disturb you.” Noah’s voice cracked. He cleared his throat and tried to put on a cool and collected face, not wanting to seem like the dork that he was. “I was hoping you could help this morning with the rowboat.” His thumb pointed to the boathouse, but his eyes remained on Spiro. Face-to-face, Eros’s nephew was… beautiful. A statue of beauty.

Noah tried to look away but couldn’t. Yes, Spiro was a hair taller than he. His square jawline, straight nose, and jade eyes rimmed in gold were mesmerizing. Noah’s heart sped as he broke eye contact. Excitement swirled in his gut at the proximity of this Adonis.

“Sure.” Eros tossed his hammer into his box of tools. Noah’s eyes followed Eros as Eros turned and spoke to his nephew.

Noah’s eyes drifted to Spiro’s bow-shaped lips before moving up to his eyes. Their eyes met, causing Noah’s heart to skip a beat. Noah had no idea what he saw in those cat eyes that were staring intensely back at him and caused his heart to flutter. It wasn’t disdain, dominance, or dismissal, the usual looks his peers gave him upon meeting him for the first time. It was… he’s really looking at me.

Everything about Spiro enthralled him. No longer wishing away the next two months before he could escape to Harvard, he was cautiously excited about the summer.

“Hi, I’m Noah.” He felt the heat of a blush on his cheeks as he extended his hand. Spiro looked directly at him; his deep stare instantly pinned Noah. His dark locks of hair, jet black, ran the length of his neck and curled at the nape of his neck. Noah tried to release a breath quietly. Adrenaline pumped through his veins like the multiple streams that fed into Lake Winnipesaukee. He’d never acted this boldly when it came to meeting someone. The way Spiro looked at him gave him the boost of confidence that he could actually stand here and talk to him. This was a first, and it surprised him.

Spiro shook Noah’s hand. “Um, my English is not so good. My name is Spiro.” A deep voice cast from his full lips. Spiro saying his own name sounded more exotic than when Noah’s grandmother said it.

Geeze Louise, his teeth are perfect, too. They’re so freaking white. Noah stumbled over his own words as he searched for something to say. Spiro’s gaze kept Noah from looking for more than a second before lowering his head. 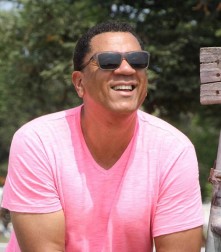 In his early in life, Bryan learned that he was different from everyone else in his world. As a young African American boy, he was the second to the youngest of seven children. Long before hormones kicked in and the realization of same sex attraction, it was his light skin and blond hair that made him different from those around him. Teased within his own race for being lighter than everyone else, the kids on the playground called him “Cornbread”.

As a writer, Bryan has taken back the power once given up to those schoolyard bullies. He is committed to bringing his readers stories of real life, with multicultural characters, riveting plots, and where the underdog always wins. He is the founder of Cornbread Publishing: the name empowers him and is a constant reminder that life can have a Happily-Ever-After.

Born in Boston, Massachusetts, Bryan and his husband of thirty-six years has made their home and life in the Central Valley of California.

Advice and essays from a gay escort, yours weekly.