Hailey delivers yet another headrush of emotions and tensions

An Echo in the Sorrow by Hailey Turner

I need more stars and time to process the total head rush that makes up this book’s story!

Every time I read a new entry in this series from Hailey Turner, I have to take a breath to absorb what she’s just blown my mind away with.

Book Six is no exception, in fact, it’s probably the most complex so far in all the Soulbound books as there are a multitude of big WTF moments that I won’t be spoiling at any point in this review 😁

As the tension builds in this penultimate chapter of the series long arc, we find Patrick and Jono dealing with an escalation of attacks against their pack while trying to chase up the missing Morrigan’s Staff (this book picks up almost immediately after On the Wings of War with Ashanti’s return still at the forefront.

As with all the other utterly brilliant books in this series, Hailey mixes mythologies with a deft hand, bringing the Egyptian pantheon into the mix, as well as the lesser known Hawaiian War God Kū and his Nightmarchers.

This is one of the aspects of the Soulbound series I love the most. I am a mythology nerd and I freely admit it, but my knowledge is mostly related to the most commonly found pantheons – Greek, Roman, Norse, Egyptian, South American – so I am always delighted when someone new pops up to give me another rabbit hole to fall into.

As for Patrick and Jono, and the rest of the gang, things are as complicated as ever, but the strength of the bond between them is solid. The way Patrick and Jono’s relationship has developed throughout this series is another solid thread which binds the narrative together.

They are each other’s lodestone, and both are forced to call on that certainty at points during this book where I wasn’t sure if they’d get through it unscathed. Hailey is so good at driving an escalating sense of foreboding where you’re really not sure everyone you love is going to make it.

Here she drives the tension to the extreme, and that’s why, once I picked up this book, I didn’t put it down until I had finished it, the plot was simply too captivating to let loose and I couldn’t bear to wait to find out whether everyone comes through unscathed.

Emotionally, this book holds the reader captive from the start, we are taken through a multitude of different highs, lows and all points in between, before being flung out at the end with a exhale of mixed relief and disbelief at just where the narrative has ranged.

Book Seven will be both an anticipated release and a bittersweet one, as I am sure there will be more pain to endure and joys to celebrate before Patrick and Jono can safely take a breath and go on that vacation to Maui.

And I cannot wait! 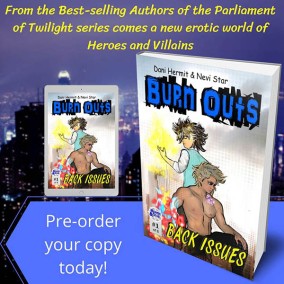 53 year old Matt Evans never thought he would be drawn back into the world of the Chosen and their staged battles of Good versus Evil. But with the return of his long dormant super powers on the heels of a devastating attack on the Chosen, Matt is forced to come face to face with the lover he left behind.

When Professor Colton Stephens sees Matt again, all of the pain of their past is brought to the surface. Thirty years of secrets and heartbreak must be overcome so that they can work together against the plotting of a Hero who turned into a terrorist.

When that terrorist uses Colton’s powers and proclivities against him, will his bond with Matt be strong enough to keep him out of the grip of Evil, or will Colton fall into the clutches of the first truly evil being in the known history of the Chosen?

“The reason that we have to put the current events in perspective, other than to avoid mass panic, is clear.”

The gray and white streaked hair of the lecturing professor bounced with a youth he no longer possessed as he paced the college coliseum’s floor. Four hundred students made up his Relevant History class and at least half, if not more, were there not for his knowledge but because of his own history. Still they were here. Now more than ever, in this new world without Heroes, they needed to have a new understanding of ethics.

“If you consider the Phoenicians…”

A hand went up. “Mythos? I mean, Professor Stephens.”

Twenty seven years after his last battle, after he’d burned out his power and said a sad farewell to the name and life he loved, somehow he still had fan-boys. Still, he was good-natured about it. Colton “Mythos” Stephens wasn’t a Hero anymore but he knew he was still an example for the next generation. He’d be eighty and they still would be cheering for him. He attempted to placate his admirer.

“First, we learn. Then maybe in the last ten minutes of class we can-”

“Tell us about the battle where you defeated The Hammer and ended his reign of terror.” The student begged with excitement.

Of course. They always wanted to hear about the very last thing he wanted to talk about. The former Hero did his best not to think about the Hammer. Privately, the Hammer had been his closest friend but publicly, they were bitter rivals. Most importantly, he was the man who Colton had found a peace with within the chaos of learning the demands of the powers the Disk had bestowed on him. Though the memory that came back the most often of Matt “The Hammer” Evans was the day he walked out of Colton’s life, disappearing into anonymity as if they had meant nothing to each other.

“The class is called Relevant History. Please keep your questions about the unit we are currently-” Colton forgot what he was going to say as his eyes fell on the last man he ever thought he’d see again.

Standing in the back of the lecture hall, barely more than a profile with the light behind him, looking for all the world like a specter summoned from the depths of Colton’s psyche, was Matt. Even after twenty-nine years, seven months, and two days, Colton would know him anywhere.

“Class dismissed,” was all he could think to say as he bolted from the lecture stage, not sure whether he wanted to run to Matt or find some dark hole to hide out in.

Colton made it about ten feet out the side door before he heard Matt’s voice behind him. “Still got some run in you, dontcha Pony?” Matt used the nickname he’d given to the much smaller boy Colton had been back in their early days as rivals. “Did I scare you?”

“How dare you?” Colton stood rigid, trying not to shiver at the sound of Matt’s voice and to keep his resolve to send him away. “Don’t say another word, you… You don’t get to call me that anymore. And you not only don’t sca-scare me, you have no effect on me at all.” He kept his eyes front as if staring holes in the far wall would somehow make the storm inside his heart calm.

“Great, that’ll make things easier,” Matt’s sarcasm was an almost physical assault on the back of Colton’s head. “I don’t have time to rehash the past right now, Pony. Is there somewhere private we can go?”

Colton spun around and instantly regretted it. Now it was real. He quickly looked anywhere but Matt’s piercing eyes. “Nothing about this is going to be easy.” He was about to start another kind of lecture.

Then he saw it. Beyond the fire he knew so well, there was fear in Matt’s eyes and damn himself, Colton was going to care. “Fine. I’ll give you ten minutes. We can go to my office. It’s really private. They put it under the library for me.”

Matt nodded and waited for Colton to lead the way. When they just stood there, looking at each other, he spoke up. “Yeah, I’m getting old.” He self-consciously ran a hand through his dark blond hair, longer now then he used to wear it, and streaked with silvery lines. “Happens to the best of us. Can we get out of the hallway before one of your fan boys recognize me?” Matt inclined his head towards the group of students who were gathering at the end of the hall, curious about the man their famous professor was talking to.

“Down the hall. Take a left. Then a right. Take the door outside. Go in the library, the one with the big gilded doors and walk into the third study room. It will look locked but go in. I’ll be there after I double back around. Try not to get bored without me.”

Colton had tilted his head up and taken a couple steps forward so he could whisper in Matt’s ear. His voice was breaking as he fought back a sultry tone, one he reserved for much more delicious words than directions to his office. Whatever Matt needed to say, he needed to say it quickly. And then Colton needed to get Matt as far away as possible because Colton finished his words with the first syllable of the intimate nickname he used to use for Matt and almost choked on it.

The writing duo behind the Parliament of Twilight books (and several briefly notorious YuGiOh fanfics), Dani Hermit and Nevi Star have been romantically involved for over 20 years, though they have been telling stories together for even longer.

A mutual love of slash fan-fiction and high fantasy novels lead to a love for each other that hasn’t faded through the years. Together they created the various incarnations of the characters who would one day emerge as the cast for the Parliament of Twilight.

Dani also does cover design both for the Hermit & Star books as well as a side-hustle to pay for coffee. She’s also been known to crochet odd little creatures, read Tarot, and play a wicked good game of Cards Against Humanity.

Art school survivor Nevi does half of the cover design work for their novels, as well as kawaii anime style art of her own, when not drowning in an ocean of baking shows and home shopping binges.

When not fully emerged in the imaginary worlds they’ve created, Dani and Nevi spend their time absorbing books, anime, and reality TV. They live in a lovely little community in suburban Indiana with their pirate crew and a few cats.