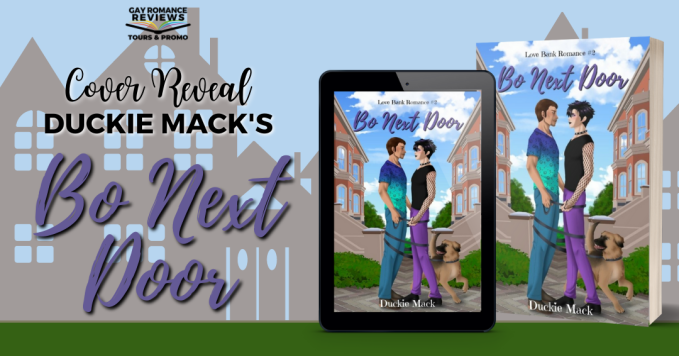 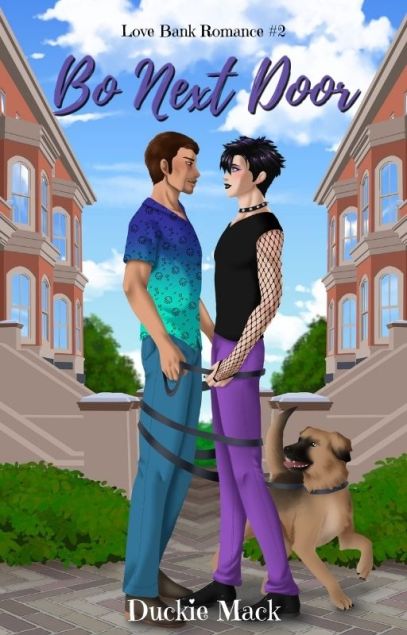 Ian enjoys the spotlight, the band, the fans—everything he’s worked hard to get. But very few people know the man under the fierce makeup and loud clothes.

Bodhi is excited for a fresh start in a new town where no one knows his past. Thanks to his hyper but lovable dog, Ollie, Bo runs into the hot and mysterious guy next door. His attraction to Ian is immediate, but dating his neighbor is a big risk.

Ian wants more than the casual hookups he’s been enjoying. Bo next door, with his crazy dog, makes him think it could be possible. Fame and notoriety bring challenges though, will it prove too much for Bodhi to handle?

Bo Next Door is an endearing story of love, trust, and finding someone who loves all of you. Sometimes the one you were hoping for is right next door.

Rider doesn’t have a lot of rules when it comes to guys, but there is one- he doesn’t date, not ever. He’s content with random hookups because dating means too much. That’s reserved for the one person he knows he can never have, his best friend, Cameron.

After watching his own family fall apart, Cam longs for someone who will stick it out through thick and thin. He’s had a string of girlfriends that never seem to be the right one. The one person he can always count on is Rider.

One night out changes everything between them. When Rider ends up telling Cam the secret he’s been hiding, Cam is left reeling. But will an accident end Cam’s chances to figure out what it means for them?

All the Stars is a heartwarming story of friendship, love, and finding the one that was right in front of you all along.

But, hey, you’re back on the market now, that’s a good thing, right?”

“I don’t know. I don’t like being on the market. I’m not like you, Ri. I can’t just go around sticking my dick in anything that moves. Or getting stuck, not sure which you prefer.”

“Yeah, we’re not going there,” he said in a flat tone.

“Well…whichever way it happens, I’m not a casual sex kind of guy. It’s easier for you, but I need it to mean something.”

I thought I saw Rider flinch. He muttered, “Yeah, right…easy.”

“What?” I asked, not sure if he knew he’d said that out loud, but it felt like there was more to it.

“Nothing. Let’s get back to this ridiculous game. Maybe I can die like eight more times before I have to go.” He picked up the controller and unpaused it, respawning at the last checkpoint.

“I like how you set attainable goals for yourself,” I teased as I started running again. If he wanted to ignore whatever that weird comment was, that was fine. I would too.

“Outlook not so good,” Rider said, right as he got snatched up in the exact same spot as the last time.

“I think if I manage to die twice the exact same way in real life, I should get a massive prize.”

“A gold star, a big one. Better yet…an actual star. I’m getting you a star. When the astronomers are looking through their telescopes, they’re going to say that’s Vega 22; right there is Betelgeuse 11, and that bright one over there – that’s Rider’s Shiny Ass Gold Star.”

Rider snickered. “You’re such a nerd.”

“Yeah, well, you know they say the company you keep says a lot about a person. So, what’s that say about you?” I said.

“It says you make me look cooler by comparison.”

“Always happy to make you look good, it’s what I live for.” 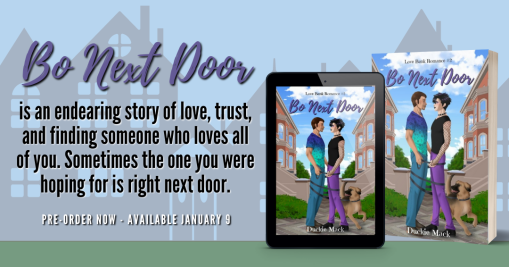 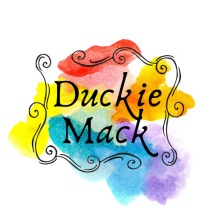 She loves reading and writing stories that show that love isn’t defined by gender. She writes sweet romance with a little heat, adorkable characters, and is a sucker for an HEA.

She lives in Southern California with her family, 2 dogs, and 3 cats, and loves to give out free hugs at pride events.

To celebrate the Cover Reveal, we are giving 2 advanced e-copies of Bo Next Door before its release

The Gardener and the Marine by R.J. Scott

Oops, forgot to come back to this one.

RJ originally released this as a newsletter serial week by week but I held off on reading it as I wanted to wait til it was done.

This is a sympathetic portrayal of the effects of combat and survivor guilt and how someone can offer a way by which a life can be given new purpose – but not cured or ‘got over’ by some magic dick.

Harrison isn’t ever going to be free from the effects of seeing his Army buddies die and him being the only survivor.

But working with Toby in the gardens at the veteran’s centre ground him and provide a connection he’s not had with life for some time.

It’s a slow burn, and that’s as it should be, but there’s no doubting it once these two men throw their all into making it work.

One of my favourites in the series .

A lovely romance about a widower falling in love again

This book is super sweet, surprisingly angst free and quietly a bit kinky.

Although things happen over a very short space of time, it really doesn’t feel like instalove.

Instead, the reader can see the journey Jasper goes on when he begins to awaken from the self-imposed isolation he’s been living in since the death of his husband.

One thing I’ll mention here, and it’s probably a more “me thing” than any kind of issue, but I’d have liked to know more about Michael, the dead husband.

He’s clearly a huge part of Jasper’s life, from school through marriage at a really young age, to losing him.

But he remains only a kind of shadow in the narrative.

That may have been a deliberate choice, but for me, the lack of “why” Jasper falling for Liam was such a big thing (i.e. because of his devotion and devastation at Michael’s death), meant it didn’t have as big an impact as it could have done.

It’s the only thing that I wished was different though, as the rest of the book is just absolutely lovely.

Liam is a sweetheart, with his own issues he’s having trouble facing, but as he slowly falls in love with both Jasper and Vermont, you can see him realising something had to change.

The final chapters are glorious and very much the start of a wonderful HEA. There’s also a bonus Epilogue via a newsletter sign up.

#ARC kindly received from the publisher Heart Eyes Press in return for an honest and unbiased review.