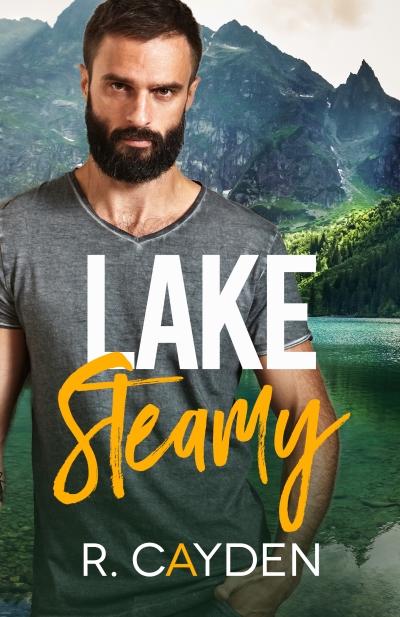 I absolutely cannot, under any circumstances, fall in love with a hunky, straight lumberjack.

Even if he does save me from a bear.

Sure, Chase is the perfect small-town combo of sexy and shy, and he doesn’t seem to mind my shameless flirting.
But I’m just visiting Lake Steamy for the summer. I don’t have time to swoon over men or any other distractions.
I’m here to launch my vlog, a sex-positive, body-positive, and very personal video series, and my new career requires all my focus.

I can’t imagine a reserved mountain man like Chase would be into a guy who overshares for a living, anyway.
Plus, I’ll be moving back to the city soon, and he fully intends to spend the rest of his life in these mountains, caring for his family and friends.
Not to mention the pesky little fact that he’s straight.

Basically, Chase is my total opposite, and a bad idea too.
A rugged, sexy, bad idea with a surprisingly gentle smile.
A bad idea with the light of the campfire flickering across his beard and a look in his brown eyes like he’s about to kiss me…

Lake Steamy is a small-town M/M romance with a flirty city boy and an earnest mountain man who finds his world turned upside down. It features a pink paddleboat, s’more-play, and lots of steamy discovery on the way to a guaranteed HEA. Enjoy!

I’m usually reading and writing, but when not, I’m happily catching time with my husband at the lake, and maybe enjoying a game or two of pool. 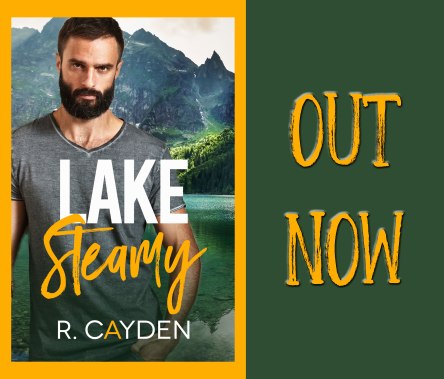 So good, this is Garrett Leigh at her finest giving us two complex men with real issues which mean the path to happiness isn’t always a smooth one.

There’s also, as with many books from this author, an exploration of some of the difficulties which can face people living with a disability. In this instance it’s epilepsy and the condition is handled with deft care and attention to detail in how it affects Jude and his daily life.

I loved that Garrett gave me such a wonderfully nuanced character who lives with a condition that, at its most severe, is a threat to life – and even when it’s not – has multiple complications which most of us would never even think of. I loved that he was more at home with his reptiles than with people. I loved that he did the best he could with what life had given him.

And Isha, oh Isha, how much did I fall for you?! Repressed, fearful, desperately trying to make amends for being a workaholic and afraid to tell his best friend Dom he’s queer too.

Everything about Isha just pulled on my heartstrings, his stumbling attempts to be a better father, his inability to ignore that Jude made him feel things, his devoted friendship with his ex-wife which compounded the guilt he felt about their marriage failing, even though Mina is awesome and repeatedly points out he wasn’t the only one who didn’t love enough for it to work.

Together they stumble and fumble their way through insanely chemistry-filled, emotionally connected hot sex and into a sort of relationship but neither’s able to say just how they feel as everything about their hook-ups change into something more.

This isn’t as angsty as some of Garrett’s other works, but there’re still things not said and eventually all comes to a crashing halt when Jude’s condition forces both men to confront their fears and hopes head on.

And again, I loved the way Garrett handled this, guiding the reader through the seriousness of what was happening but never pushing it into dramady and plot for plot’s sake.

There are also wonderful guest appearances from the previous couples in this series and I liked seeing Rae in his role as Jude’s friend, supportive and encouraging, while Dom was his usual awesomely grumpy but brilliantly loyal self.

And, as a PS, the epilogue in this is bloody perfect but I want more! I really hope we get a book four, even if it’s just a teeny novella, with the three couples in this trilogy as Garrett did with the Skins series because I’d love to see them all a few years down the line.

#ARC kindly received from the author in return for an honest and unbiased review My Garrett Leigh fangirling is my own work as usual.

Mack Garrett loves the rolling hills surrounding his Northern California dude ranch. Leading vacationers on horse trails with his two best friends is enough—romance is definitely not in the cards. When a sexy tourist shows up at Clean Slate, he’s as far from Mack’s type as can be. So why is the handsome city slicker so far under his skin in less than a day?

Roughing it in the middle of nowhere isn’t anywhere near Wes Bentley’s idea of fun. Then he lays eyes on the gruffest, hottest papa bear he’s ever seen. But Mack is as hard to pin down as he looks—distant, sharp-tongued, and in desperate need of a shave. Until a campout gone wrong strands both men in the mountains with nothing to do but get to know each other.

Mack intends to keep his closely guarded heart out of Wes’s very talented hands. But for a seven-day cowboy, Wes is packing some long-term possibility. The cold country air can do wonders for bringing bodies together—but it will take more than that to bridge the distance between two men whose lives are worlds apart.

This book is approximately 90,000 words

One-click with confidence. This title is part of the Carina Press Romance Promise: all the romance you’re looking for with an HEA/HFN. It’s a promise!

Footsteps scuffled in the dirt. Wes turned, expecting to see Sophie or Miles. Instead, Mack’s broad body filled his vision. He smiled at Wes from beneath the tilted brim of his hat—a smile less friendly, and slightly more predatory. Wes’s skin prickled with awareness.

“Doesn’t seem like you to not be sociable,” Mack said.

“Stretching my legs,” Wes lied. Okay, so that was partly true. He glanced around, startled to see he’d wandered a good ten yards from the creek and the other campers.

“Don’t stretch too far. You might get eaten by a mountain lion.”

Mack shrugged one muscled shoulder. “Can’t say as I’ve seen one myself, but I’ve seen their tracks.” Wes must have had some kind of terror on his face, because Mack added, “They tend to stay to the north, though, higher up in the mountains. Shouldn’t be much of a bother to us.”

“Good.” He took a breath to calm his suddenly racing heart, which could have been from the mountain lion scare as much as the way Mack had taken a protective step closer. Close enough that he could smell sweat and horse, and something deeper that was all Mack. Not cologne. He doubted Mack wore that shit around the horses. But whatever the smell was, it was damned intoxicating.

“You not enjoying the trip?” Mack asked out of the blue.

“Sure. Not used to riding on a horse.”

Mack tilted his head, that smile dimming. “You sure that’s it? A few times on the trail, you looked…I don’t know. Sad?”

Mack had been checking him out while they were riding? “I’m not sad, exactly. Sometimes I get inside my own head and it isn’t a pretty place to be. All the regrets and bad choices. It’s why I usually am the center of attention in a crowd. Talking and entertaining people lets me not think about my problems.”

“I hear ya.” Mack shoved his hands into his jeans pockets, pulling the material tight across his crotch. Wes couldn’t help taking a peek at the package, nicely outlined even under denim.

Dropping to his knees and blowing the tour guide for being kind was probably frowned upon by management, so Wes forced his gaze back up. Mack watched him with open amusement in his eyes, even if his lips were still flat. Curious, Wes poked out his tongue and clacked the ball of his tongue stud against his teeth. Mack’s nostrils flared.

“Ever felt one of these against your—” Wes glanced at Mack’s crotch “—skin?”

“Troublemakers like you deserve spankings,” Mack retorted, his voice low and growly.

“Was that an invitation?” Wes purred, cocking his hip just so.

His only response was another growl—the kind that made Wes’s belly tighten in anticipation of action. Instead, Mack threw his shoulders back and said flatly, “I don’t fuck the guests.”

“Then how about after checkout on Saturday? I won’t be a guest anymore.”

Mack’s silence said loads to the fact that he was actually considering Wes’s offer, and hell yes, Wes would love to bend over for Mack—a big, stallion of a man who probably fucked like a champion.

A.M. Arthur was born and raised in the same kind of small town that she likes to write about, a stone’s throw from both beach resorts and generational farmland. She’s been creating stories in her head since she was a child and scribbling them down nearly as long, in a losing battle to make the fictional voices stop. She credits an early fascination with male friendships (bromance hadn’t been coined yet back then) with her later discovery of and subsequent love affair with m/m romance stories. A.M. Arthur’s work is available from Carina Press, Dreamspinner Press, SMP Swerve and Briggs-King Books.

When not exorcising the voices in her head, she toils away in a retail job that tests her patience and gives her lots of story fodder. She can also be found in her kitchen, pretending she’s an amateur chef and trying to not poison herself or others with her cuisine experiments.