My favourite so far in this excellent rock band romance series 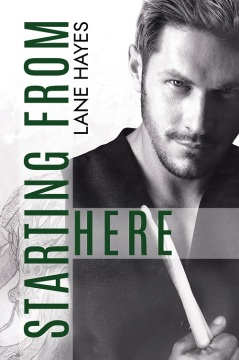 Starting From Here by Lane Hayes

Definitely my favourite one so far in this excellent rock band based series from Lane.

Former best friends who were turned into ‘enemies’ through manipulation and bad feelings, Lane skilfully navigates their relationship development while they’re on tour with their respective bands and I was rooting for them from the off.

While this book can be read as a standalone, I wouldn’t recommend it because there would be some of the subtle layers missing from the previous books.

I really appreciated how both Tegan and his band mate and best friend Justin slowly realised Declan wasn’t an enemy and that the drama was kept to a level which totally worked within the story.

Tegan and Declan reconnection came with loads of hot angry sex, something which Lane writes so very well.

But even from the first fraught encounter there is more there than just lust. The sense of something previous, a past that hasn’t been forgotten in spite of all the efforts to do so.

I loved these two so much, I wanted them to forgive the hurts and admit that they still wanted each other but they needed to go on their own individual journey first.

When they do start that process though my heart was singing along and I was smiling throughout.

There’s subtle humour laced with the feelings, the two bands mesh together into a substitute family and Tegan’s own family also has an important role to play.

I loved his parents just from the small glimpses we get. Declan’s mum isn’t as instantly likeable but I also understood her motivations.

The Epilogue is all ends up awesome and I’m dying to find out who book four will be about (the sneak peek isn’t in the ARC).

Slow burny in the best way and packed with UST

Road to You by Jaclyn Quinn

I wanted to thump Parker a lot of the time in this book, but I also wanted to give him a fluffy blanket and tell him it would be okay 🤣

Road to You is a well written second chance romance coupled with a best friend’s brother and childhood friends trope.

It relies perhaps a tiny bit too much on using flashbacks to give insights into Parker and Jason’s past lives but it’s a difficult path to travel narratively if the reader doesn’t have this information in some way or another.

That said, there aren’t hundreds of them and what there is, are used to highlight a specific memory or give a particular insight into why Parker behaves as he does.

Jason was a more sympathetic character from the off because the reader knows he’s sorry and regretting the single mistake he made at a critical time in their past.

He’s seeking forgiveness from the start and doing all he can to get Parker to see how much he regrets what he did.

There’s no other drama, every tension point comes from Parker’s vulnerability and the plot moves along at a reasonable pace.

This book overlaps into the same timeframe as the last two in the series, but only by a small amount.

It’s a slow burn, but has some wonderfully intimate moments once Parker admits he’s still in love and willing to risk his heart again.

Super sweet romance which made me smile throughout

So sweet! This book was an absolute delight even though it sensitively deals with the real consequences of a relationship with a paraplegic.

I loved both main characters, Jamie really is sunshine in person. He’s gone through his dark times after he was paralysed and he’s come out the other side determined to live the best life he can.

His childhood best friend Stephen’s life-experiences, while not physically traumatic, have been emotional ones and he’s stuck in a mire of relationship doubt when he bumps back into Jamie after 13 years apart.

I loved how their friendship just took right back off as if they’d never been apart, although there were obviously gaps in their lived experiences which they needed to deal with – Jamie’s situation being the big one.

I liked how nothing is skipped over, Stephen makes mistakes, he underestimates Jamie, he makes assumptions and he learns. They fall from friendship slowly into love because both have fears which need overcoming.

This book just made me smile from start to finish and I very much believed and appreciated their journey into a relationship. There’s a smashing cast of supporting characters too, both sets of parents are lovely and their collective sisters are a riot!