Book Blitz: Can’t Tie Me Down by Janet Elizabeth Henderson 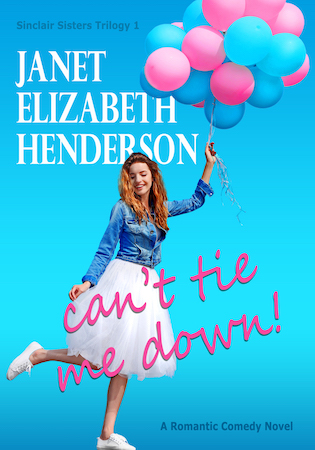 Can’t Tie Me Down!

There aren’t many jobs available in the tiny village of Arness, Scotland, which is why Mairi Sinclair works online—as a virtual girlfriend.

For a weekly fee, she emails, messages and sends photos to desk-bound geeks around the world.

Nothing dodgy, mind you, she keeps her clothes on! Mairi loves her job, because the last thing she wants is to be tied down to one man forever. Life is so much simpler when you can keep men at a distance.

And that’s why she’s upset when her virtual boyfriends start turning up in town. Someone has hacked her online presence and given out her real life address. To make matters worse, they’ve told the world that she’s looking for a husband and the first virtual boyfriend to romance her properly will win the role in real life.

Fortunately, local mechanic and one time boyfriend, Keir McKenzie, is more than willing to help her—for a price. He too wants a chance to win Mairi’s heart and tie her down forever.

FREE for a limited time only

Janet is a Scot who moved to New Zealand fifteen years ago. Among other things, she’s been an artist, a teacher, a security guard at a castle, a magazine editor, and a cleaner in a drop in center for drug addicts (NOT the best job!).

She now writes full-time and is working on her 19th book. Her books have won several awards, including the Daphne du Maurier award for excellence in mystery and suspense.

When she isn’t living in her head, she raises two kids, one husband, and several random animals. She survives on chocolate and caffeine. 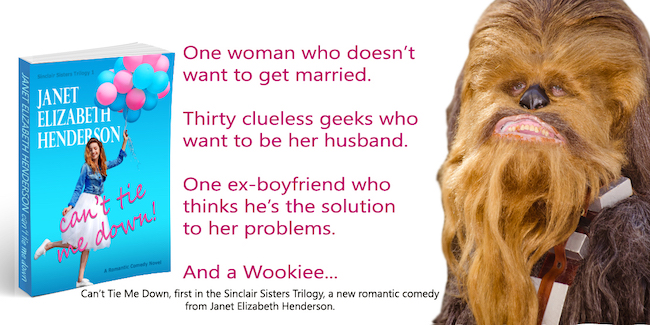 Knowing what’s coming doesn’t mean you can stop it.

Life’s become routine for Hunt and Cam—solving murders, hanging at the club and expressing their affection for one another. Vigorously. Then a skinny kid barely into his teens sought them out.

“I saw my father last night,” Asher Gamble told Hunter. “He said Jason Furney’s going to die and people will say I did it.”

Hunt frowned. The boy’s name seemed familiar. “Tell me the rest of it.”

Asher locked his gaze on Hunt’s as intractably as Cam ever had.

“My father killed my mother and my brother when I was two years old. He died in prison four years ago.”

So much for routine.

Psychic Men is fact-based like the other Hunter Dane Investigations in the Hunt&Cam4Ever series which starts with Matchstick Men.

I’ve used my artistic license to sculpt real things into a story I made up. The murder is fiction. The psychism is not. See Appendix for links.

A 60k word police procedural designed to be read stand-lone. The 4th book in the Hunt&Cam4Ever series which begins with Matchstick Men. For adult lovers of murder mysteries and apple pie for breakfast.

“I HAD A CALL WHILE you were running,” Cam settled on a counter stool while Hunter cleaned up after breakfast. “You know David Morganfeld?”

“The classical pianist? Not personally, but yeah, he lives in the glass and metal monstrosity a couple miles along the track,” Hunter said, bringing a jar of salve with him and taking the stool next to Cam’s. “You taking off your pants, or am I doing it?” He ran a finger over the bulge of Cam’s cock under the fabric. “And how would you like me to do it?”

Every morning that Hunt stayed at Cam’s, which was most nights, he put a healing ointment on Cam’s left thigh. The salve treated the scars left by bullets and surgery and the external fixators that had been screwed into his shattered femur.

Even after four months, it was rare that they got through the process without orgasms. At first, the feeling of Hunt’s fingers on the scars had been unpleasant. Not painful, according to Cam, but weirdly nauseating. But it had to be done, to keep the scars from hardening, and over time, to fade.

They’d been on the massage table in Cam’s birch-paneled bathroom that first time. So Hunter had used the most expedient distraction available: he’d taken Cam’s limp dick into his mouth. It didn’t stay soft for long. Hunter’s tongue and lips worked his Dom’s cock while his fingers worked the salve over the scars.

Cam had lain back, not chasing his orgasm until Hunter treated the last of the scars and wrapped his strong arms around Cam’s hips, pulling him tight to himself, deep-throating him.

It had become their morning ritual, and they were quite creative about varying the location and form of sex play. The scars had smoothed and flattened without hardening, and the feeling of Hunt’s fingers no longer bothered Cam. But it was still, they agreed, a fine way to start their day.

I don’t write the fantasy HEA. But there are such things as commitments kept, caring unreservedly for another, and never giving up. Which means everything is a love story. Murder investigations included.

My characters and their stories are everything. Hunt and Cam, Ben and Avia, Mike and Cal are vibrant, passionate people. So there tends to be a lot of sex. And they are as real to me as my readers are.

CLICK HERE FOR YOUR CHANCE TO WIN A $5 GIFT CARD

Exclusive to Amazon and Available to Borrow With Kindle Unlimited

Sometimes it’s the cop who needs to hit the floor…

Haunted by the worst case of my career, I knew only one way to exorcise the images from my mind, the victim from my soul …

Inside the club, I scanned the room. He was here—Camden Snow—a sex god in the guise of unpretentious youth. Only his ice-blue eyes gave evidence of the Dom who took whomever he wished, whatever way he wanted, with a look and a nod. Merciless. Cam found me watching him and fixed me with his arctic gaze. This time, I didn’t walk away. He cocked an eyebrow.

The last thing I needed was mercy. I dropped to my knees.

…relaxed and informal, highlighted by the weekly Matchstick Challenge game. Detective Sergeant Hunter Dane, reigning champion, looked forward to a relaxing evening to start his 3 days off. A few beers on the deck. A sexy interlude. Stumping a challenger with a new puzzle. Home early for a decent night’s sleep.

But some people are so deadly serious about their games.

Now Hunt has a fresh body and a new puzzle to solve in twenty-four hours if he wants to find a killer.

And Dom Camden Snow comes along to help with a few games of his own in mind. Sherlock and John were never like this!

The complete text of the original novella On His Knees, the Hunt&Cam origin story, comprises Part One of this novel. Other books of this series, starting with Dancing Men, are available now exclusively on Amazon.

I don’t write the fantasy HEA. But there are such things as commitments kept, caring unreservedly for another, and never giving up. Which means everything is a love story. Murder investigations included.

My characters and their stories are everything. Hunt and Cam, Ben and Avia, Mike and Cal are vibrant, passionate people. So there tends to be a lot of sex. And they are as real to me as my readers are.

CLICK HERE FOR YOUR CHANCE TO WIN A $5 GIFT CARD