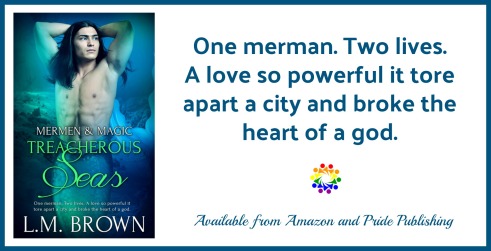 Caspian, the Atlantean God of Justice, has devoted his eternal life to protecting the merfolk. He has no time for romance, not even when the merman he now watches over is his former lover reincarnated.

Phoebus, a merman living in the sunken city of Atlantis before the Atlanteans were banished, never intended to fall for Caspian, the most promiscuous of all the gods. Yet, when Caspian offers him immortality, Phoebus doesn’t know if he can pay the price, even if refusing means breaking the heart of a god.

Back in the present, Marin remembers the love he once had for Caspian, but he’s not the same merman now. Caspian might have loved him as Phoebus, but he knows the god cannot give him what he needs.

Marin doesn’t want Caspian’s protection. He wants revenge, and he is prepared to make the ultimate sacrifice to get it, even if it means breaking Caspian’s heart a second time. 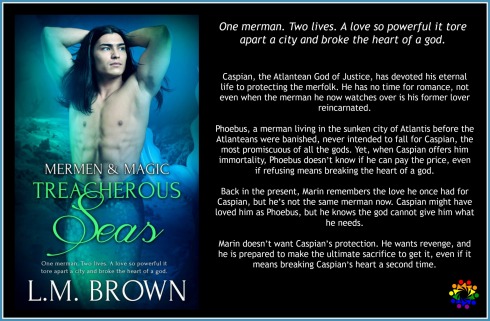 “Caspian, there you are.” Cari breezed into the room and settled herself onto the chaise. “I’ve been searching everywhere for you.”

Caspian sipped his wine before answering his sister. “Well, now you’ve found me.”

Cari helped herself to a glass of her own. “Since when do you travel to this part of the world?”

“I needed some time alone,” Caspian replied. Rafe’s jealousies had pushed him to his limit today, so he had escaped to a small province in Italia for a little peace and quiet. Hiding from his priest wasn’t difficult, but avoiding his sister was another matter entirely.

“You know I don’t like it when you poke into my head.” He managed to block most of the immortals from his mind, but his sister appeared to have the ability to bypass all his defenses. He supposed it came from being the Goddess of Prophecy.

“I didn’t,” Cari replied. “But when I checked your palace, he was ranting about some merman you’d fucked. I simply drew my own conclusions.”

Caspian rolled his eyes. “Rafe was present in the room the entire time. He is well aware of what we did.”

Cari huffed. “Did you ever think that your priest might not get quite so jealous if you didn’t make him watch you with other men?”

“The merman was having trouble breaking his mating fever. He came to me for help, we broke his fever and he returned to the ocean. That was it.”

“What was his name?”

“Phoebus. Why do you want to know?”

“Just curious. I spoke to Mother this morning.”

“And what did she have to say for herself?”

“She told me Medina had slipped you a love potion.”

“Apparently. She added something to my wine, but I don’t know what. She was probably bluffing.”

“Well, it doesn’t seem to have had much of an impact on me. Probably she isn’t as good at brewing up mischief as she likes to think.”

Cari sipped her wine. “You never did figure out the difference between a love potion and one that simply inspires lust.”

“I mean that if she’d given you the latter, which is what she hands out to most who seek her services, you’d be fucking that young merman right now. A true love potion, on the other hand, takes time to work, just like real love takes time to grow.”

“What are you saying? You think I’m going to fall in love with someone? The merman?”

“I think I’ll let that particular experience pass me by, thank you all the same.”

“You seem to be laboring under the mistaken belief you have a choice in the matter.”

Cari finished her glass of wine and poured herself another. “I took a peek into your future after I spoke to Mother.”

“I suppose telling you I don’t want to know about my future would be pointless?”

“It doesn’t matter what you believe in. You’ve met Phoebus, and been intimate with him, just hours after drinking Medina’s concoction.”

“He only sucked me.”

“That’s more than enough to trigger the potion. Chances are, if it’s one of Medina’s brews, the touch of your hand to his would have been enough.”

“I’m probably never going to see him again,” Caspian said, even though the thought of a second encounter with the merman made his heart race.

“I assure you, you’ll be seeing him very soon. He’s a nice man and I think he’ll be very good for you.”

“Why are you and Mother so eager to see me settled down with just one man? I’m perfectly happy as I am.”

Cari shook her head. “When you’ve fallen for him, when you’re head over heels, desperately in love with him, you’ll know what perfect happiness is.”

When L.M. Brown isn’t bribing her fur babies for control of the laptop, she can usually be found with her nose in a book. 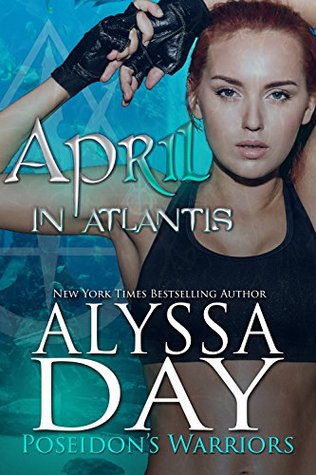 When April, Poseidon’s first-ever female warrior, meets Pine–“don’t call me a werewolf” — prince of the European wolf shifters, she saves his life.

And then gives him the finger, because the sound of his sexy Scottish accent when he said “I think I’m in love, lass” gave her shivers in places shivers had no right to be. She’s a warrior, not a werewolf groupie.

Pine wanted April the moment he saw her, just before she saved his life. Then he knew he must make her his. But the appearance of his long-lost and presumed-dead twin complicates Pine’s plans, and this time it’s April’s life at stake.

Together, April and Pine are so much stronger than they are apart, but the heat between them may be enough to burn down the world.

Can two such unlikely allies find their way past danger to love? Or will mutual seduction be the beginning of the end?

You can also grab book 1 – January in Atlantis – for FREE!

Alyssa’s paranormal series include the Poseidon’s Warriors and Cardinal Witches paranormal romances and the Tiger’s Eye Mysteries paranormal mysteries. In an Alyssa Day book, the good guys (and gals!) always win and happily ever after always prevails!

Her books have been translated into a zillion languages but she’s still holding out for Klingon. 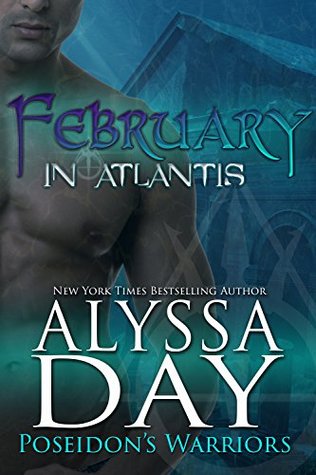 When Poseidon’s elite warriors gear up to train a new generation of fighters, they have no idea that Atlantean Queen Riley has secretly taken on a new role: Matchmaker.

By the end of the year, she plans to find soul mates for all twelve of Atlantis’s fiercest warriors . . .

Twelve all-new adventures in the hotly anticipated world of Poseidon’s Warriors, coming once a month from New York Times bestselling author Alyssa Day. These books are sexy, romantic, and wickedly addictive —welcome to 2018! And welcome to:

A Year in Atlantis

Alyssa Day is the New York Times and USA Today bestselling author of more than forty novels filled with kissing, laughter, mystery and magic. Alyssa’s paranormal series include the Poseidon’s Warriors and Cardinal Witches paranormal romances and the Tiger’s Eye Mysteries paranormal mysteries. In an Alyssa Day book, the good guys (and gals!) always win and happily ever after always prevails!

Alyssa’s many awards include Romance Writers of America’s prestigious RITA award for outstanding romance fiction, and the RT Reviewer’s Choice Award for Best Paranormal Romance novel of 2012. She’s a recovering trial lawyer who loves life outside of a courtroom. Her books have been translated into a zillion languages but she’s still holding out for Klingon.

You can hang out with her on Facebook (www.facebook.com/AuthorAlyssaDay), Twitter (@alyssa_day), where she talks about her rescue dogs and her future pug ranch, and her blog, where she talks openly about her struggles with depression and hosts Mental Health Check In Fridays (www.alyssaday.com/blog).

Text ALYSSADAY to 66866 or stop by her website to sign up for the newsletter and get release day news, behind-the-scenes scoop, win prizes, find out where Alyssa will be making personal appearances, and more! And if you love to talk books, join the DayDreamers!