For the 10th year running, an amazing group of authors have generously agreed to donate, in Keith’s name, a portion of their May book sales to help raise awareness for mental health.

This yearly event benefits the Keith Milano Memorial Fund at the American Foundation for Suicide Prevention. You can help raise money and awareness for mental health in the following ways:

Thank you in advance for your support as we work to bring mental illness out of the darkness. 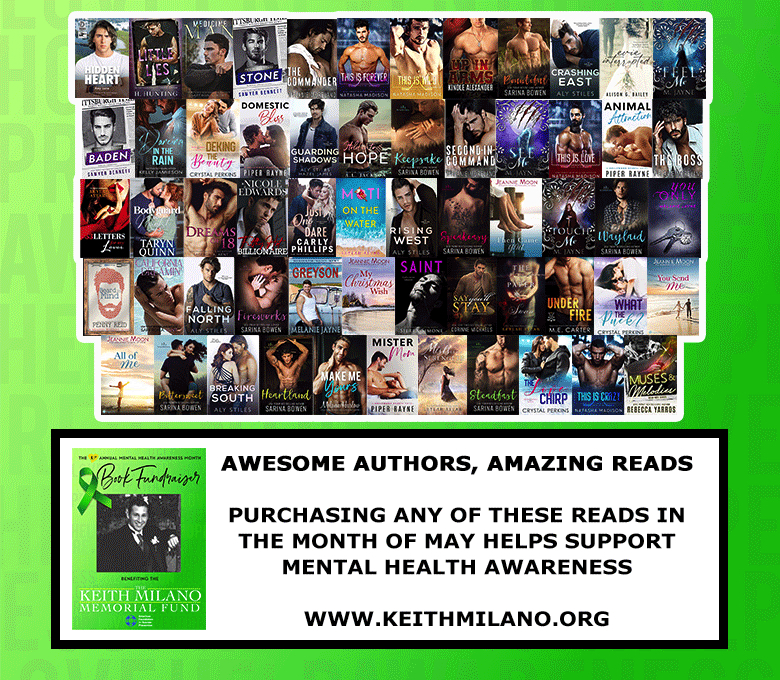 A message from Keith’s Sister Denise 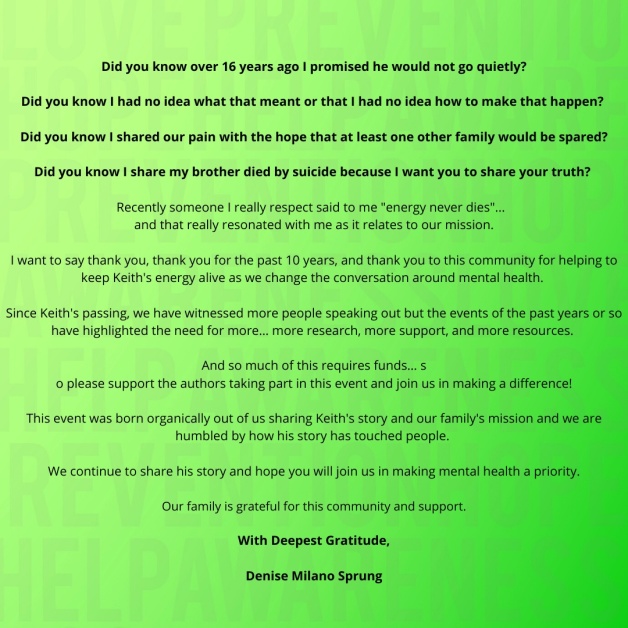 Keith often struggled with society’s perception of mental illness. Our hope is that by having the strength to say that Keith was “Bipolar” we can strip away the stigma and help others to be more open about their disease.

Watch to learn more about the Milano Sprung Family’s mission:

AFSP is the only national not-for-profit organization exclusively dedicated to understanding and preventing suicide through research and education, and to reaching out to people with mood disorders and those affected by suicide. AFSP is a fully accredited 501(c)(3) tax-exempt organization incorporated in the state of Delaware with primary offices in New York City. Federal tax ID # is 13-3393329. 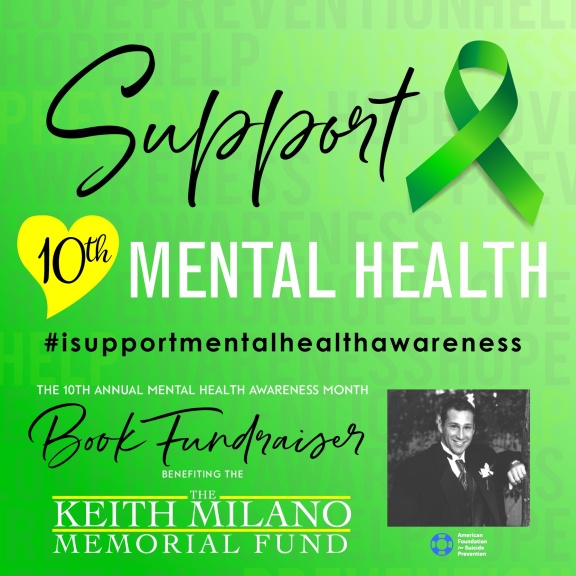 For the eight year running, an amazing group of authors have generously agreed to donate, in Keith’s name, a portion of their May book sales to help raise awareness for mental health.

A message from Keith’s Sister Denise

15 years ago when we lost Keith, we decided he would not go quietly, that we would fight for mental health awareness, fight to bring mental illness out of the darkness in his name. At the time we had no idea what that would mean, where our journey would take us or that this community would embrace the cause and join us in the fight.

This event was born organically out of us sharing Keith’s story and our family’s mission and we are humbled at how his story has resonated with so many. We continue to share his story and hope you will join us in making mental health a priority. By sharing your truth, the dialogue can continue to help others feel less alone and more likely to get help.

Our family is so touched by how this community has embraced this cause.

Here is how you can help raise money and awareness for mental health: 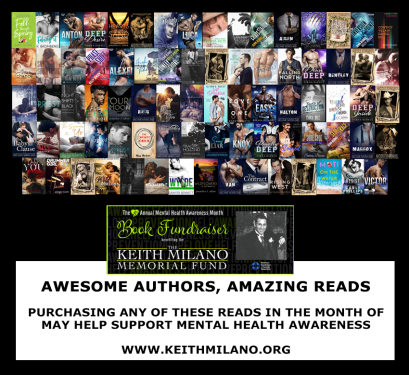 The Keith Milano Memorial Fund was established to help raise awareness about the devastating and deadly disease that is mental illness.

Keith’s spirit and laughter is kept alive through our efforts to increase awareness about mental illness and to raise money for education and imperative research.

Keith often struggled with society’s perception of mental illness. Our hope is that by having the strength to say that Keith was Bipolar we can strip away the stigma and help others to be more open about their disease.

If you want to know more about Keith or why Denise does what she does, here is short video/interview that explains. The Keith Milano Memorial Fund benefits the American Foundation for Suicide Prevention (AFSP).

At the end of the event, participating authors pay AFSP directly.AFSP is the only national not-for-profit organization exclusively dedicated to understanding and preventing suicide through research and education, and to reaching out to people with mood disorders and those affected by suicide.

AFSP is a fully accredited 501(c)(3) tax-exempt organization incorporated in the state of Delaware with primary offices in New York City. Federal tax ID # is 13-3393329. 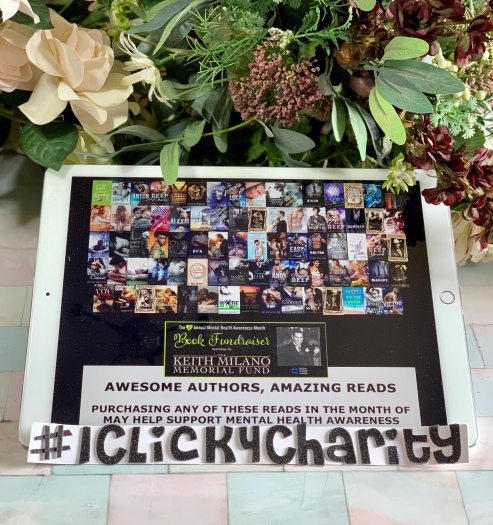 …okay so it’s more a round-up of the books that stood out for me this year as I’ve read almost 400 and (while that’s a load down on the last two years) I was lucky to not have many ones I failed to connect with.

Sooo, in no particular order at all, honestly, there isn’t an order, it’s the ones which sprung into my head and stayed there, I give you My Best Books of 2019 (and quite a few bonus festive entries at the end). 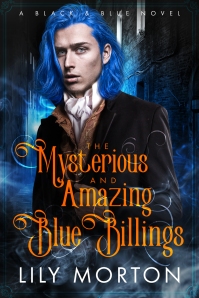 Lily Morton’s The Mysterious and Amazing Blue Billings blew me away. Totally different from one of my favourite authors, a paranormal romance in the beautiful surrounds of the City of York.

Tal Bauer’s Soul On Fire was stunning. Especially considering the background to the book, which was written in a month and based on reader suggestions for all aspects of the narrative.

Tibby Armstrong’s Taste The Dark I was gutted when Random House cancelled Tibby’s Boston After Dark series, so the news she was going to self-publish book two in the trilogy was wonderful. The book itself lived up to all expectations. Now I really, really need Nyx and Isander please Tibby 😁 ♥

Allie Therin’s Spellbound a new author for me and a wonderful debut historical novel set in an alternative 20s Prohibition Era New York. 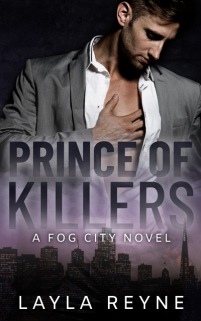 I could have gone for a number of Layla Rayne books but I picked Prince Of Killers for the brilliant opener to what turned out to be a fabulous assassin/Government agent enemies to lovers romantic suspense.

RJ Scott’s Single, book one in her new series focusing on single dads was an absolute triumph for me and catapulted its warmth and its compelling characters to the top of my list of favourites from her.

Jackie Keswick’s step into fantasy land resulted in a triumphant Healing Glass, one of my absolute favourite reads of all of 2019 with its well written and detailed world building .

Perennial favourite Lucy Lennox broke my heart (and then fixed it again) when she finally wrote Doc and Grandpa’s romance in Wilde Heart. I’d been waiting for this since we first met this bunch of amazing characters, and it didn’t disappoint. 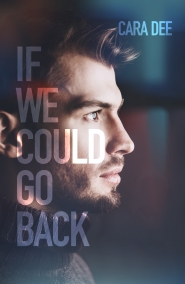 Cara Dee challenged trope expectations with If We Could Go Back and smashed through the “no cheating” rules with a stunningly emotional tale of a romance long in the building.

Charlie Adhara hit her third 5* rating from me for her Big Bad Wolf series with book three, Thrown To The Wolves,  which saw Cooper and Park’s relationship strengthen as they investigated more whodunits.

Easily the most brilliantly named book on my list, Lyn Gala’s Earth Fathers Are Weird was an original, fabulously executed Sci-Fi mPreg alien romance and I utterly adored it.

Davidson King provided an epic closure to her fabulous Haven Hart Universe with Poe’s tale and Raven’s Hart was a perfect way to sign off on this romantic suspense saga.

Kat and Agnes Merikan brought their insanely brilliant paranormal motorbike club series to an end with In The Arms Of The Beast, which saw the Kings of Hell MC battling demonic entities in this jaw-dropping wft-ery of everything!

Elin Gregory soothed my historical romance loving heart with book two of The Carstairs Affairs, Midnight Flit in which Miles and Briers are dropped into Europe at the start of the madness leading up to the Second World War in the early 1930s. 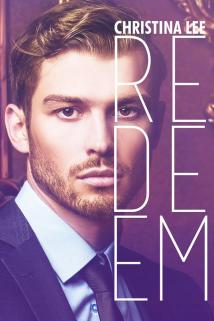 My favourite cover model turned up again on Christina Lee’s Redeem (and yes, I will use his picture again exactly for that reason!) with a redemption arc romance which pleased every bit of my aching heart.

With Prince of Death (co-written with W.M. Fawkes) Sam Burns cemented her place as one of my absolute favourite paranormal/urban fantasy authors. I could have picked any of the trilogy but the opener set the scene for what was to come perfectly.

And, speaking of urban fantasy, next up is the bloody brilliance that was Hailey Turner’s All Souls Near & Nigh. Book two in what I believe will be a six (or more) book series, this one took the reader on an epic ride into South America with the Aztec Gods – Quetzalcoatl and Tepoztēcatl, the Mexican/Catholic death cult Goddess/saint Nuestra Señora de la Santa Muerte, as well as the Native American trickster God Coyote or Altse Hashke.

Epic fighting was on the cards in my next pick, Rachel Reid’s Heated Rivalry, an insanely hot enemies to lovers ice hockey sports romance featuring an All American dreamboat and his Russian rival in the arena.

Back to the urban fantasy/paranormal for this second instalment in MA Grant’s excellent series The Darkest Court. The Marked Prince played around with the Seelie/Unseelie Courts and Irish mythology for a superb slow burning but compelling tale.

Beth Bolden made me cry with Terrible Things, the first in her rock band series and a beautiful reconciliation, second chances romance which is well-worth a read. It doesn’t follow the usual tropes. 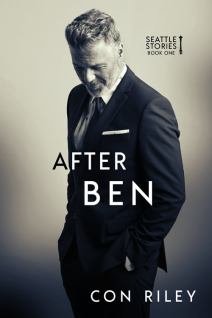 And Con Riley also had the tears flowing with the divine After Ben, first in her Seattle Stories series, which is being re-published. It remains one of my favourite books dealing with moving on after the death of a long-term partner.

Next up. Garrett Leigh went paranormal and OMG it was EPIC. Like seriously good, a new interpretation of shifters and werewolf society and full of the usual Britishness which typifies her work. Grab your copy of Fated Hearts if you’ve not read it yet.

And while we’re on with the werewolves, Annabelle Jacobs turned to them once again for her latest series, absolutely different from the Regent’s Park Pack series which is one of my all-time favourite shifter works. Escape was daringly different, menacing and not entirely unlike the political shitstorm occuring in the UK right this minute. 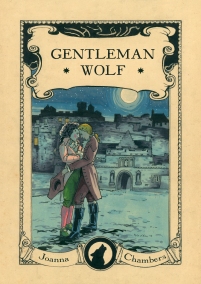 Joanna Chambers also gave me werewolves, but with a glorious historical twist and a bit of a cliffhanger in the first of her duology Gentleman Wolf. Set in 18th Century Scotland, it’s an epic tale of mystery, heartache, adventure, and suspense with a seriously nasty villain and a stunning cast of characters.

Merlin and Lancelot reincarnated (which bizarrely is also the plot of one of the books I’m writing atm!) take the stage in Victoria Sue’s Twelfth Night, which plays not only on Shakespeare’s title but with Arthurian mythology to craft a thrilling urban fantasy.

My last recommendation before I get to the Festive Recommendations is Kasia Bacon’s ridiculously brilliant in less than 28 pages Rago. A dragon shifter fated mates snippet set in her excellent Order Universe.

This is by no means my only exceptional reads of the year. I could also add about another 50 books but then we’d be having to scroll down for days.

I could include Aimee Nicole Walker’s Wicked Games, which might be my favourite book of hers so far full stop (although I’m massively falling for Locke and Key in her latest series so who knows!)

Sneaking on would also be E.J. Russell’s fab Supernatural Selection series, May Archer,  Eden Finley, Neve Wilder, Nora Phoenix, and K.M. Neuhold. I’d go on but then I’d forget someone and I’d be annoyed and worried I’d upset them.

So just clicky here and read all my reviews for all the amazing authors who’ve delighted me with books during 2019.

And let me just say a huge thank you to all the authors who’ve entrusted me with their ARCs to beta, proof or review during 2019.

It’s been a pleasure and a privilege. Now, onto the first month of the new year! 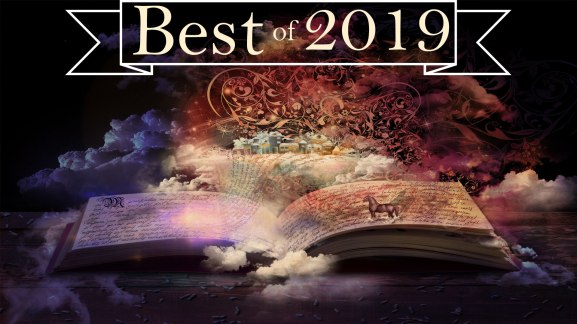