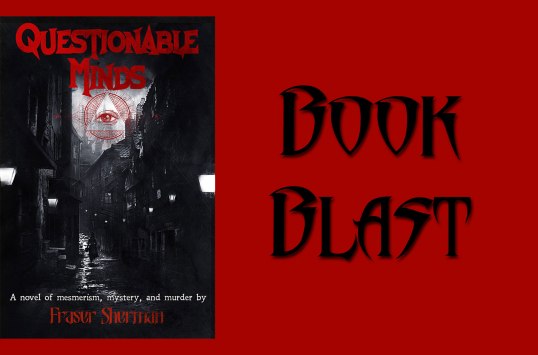 In Victorian England, 1888, there are those who say Sir Simon Taggart is under the punishment of God.

In an England swirling with mentalist powers — levitation, mesmerism, mind-to-mind telegraphy — the baronet is unique, possessed of mental shields that render him immune to any mental assault. Even his friends think it’s a curse, cutting him off from the next step in human mental and spiritual evolution. To Simon, it’s a blessing.

Four years ago, the Guv’nor, mystery overlord of the London underworld, arranged the murder of Simon’s wife Agnes. Obsessed with finding who hired the Guv’nor, Simon works alongside Inspector Hudnall and Miss Grey in Scotland Yard’s Mentalist Investigation Department. Immunity to mental telegraphy, clairvoyance and mesmerism are an asset in his work — but they may not be enough to crack the latest case.

A mysterious killer has begun butchering Whitechapel streetwalkers. With every killing, the man newspapers call “the Ripper” grows in mental power and in the brutality of his attacks. Is murder all that’s on his mind or does he have an endgame? And what plans do the Guv’nor and his army of agents have for Simon and the Whitechapel killer?

Questionable Minds is set in a Victorian England struggling to preserve the social hierarchy while mentalism threatens to overturn it. The cast of characters includes Dr. Henry Jekyll (and yes, his friend Edward Hyde too), Jack the Ripper, and multiple other figures from history and fiction.

Simon Taggart’s plunge into the abyss happened in an instant.

Col. Moran, seated at the dining table on Simon’s left, had said something to the Duke of Falsworth about a fellow hunter Moran had known in India committing suicide. Falsworth snidely observed that given the man’s debts, hanging himself had been the only possible solution.

And suddenly Simon was standing in the drawing room again. Staring up at Agnes in her white nightgown, hanging from the ceiling with her tongue protruding, her face blackened. Rage consumed him at the memory, rage at the men who’d brought about his wife’s death. Pearson Bartlett, mesmerist. The Guvnor, who’d given Bartlett his orders. And behind them, the unknown man who’d paid to have Agnes slain.

It was the scent of mutton that snapped him back to the Montworths’ dining room, a scent rising from the porcelain serving platter levitating through the air before him. Steered by Amanda Montworth’s vril, the platter bore the roast saddle of mutton down the long dining-room table. Her grey eyes were fixed on the platter, of course, as levitators depended on sight to focus their vril. The eyes of her parents and eleven uneasy guests were also watchful as the dish approached the epergne, the massive candelabra at the table’s center. Simon knew he wasn’t the only guest imagining what a shower of spilled gravy would do to their formal black waistcoats, jackets and white gloves, or the women’s elegant dresses.

The platter clinked against the epergne and shuddered for a moment, but Amanda, brow furrowed, regained her mental grip. The platter ceased quivering, backed away and settled into the hands of one of the footmen, to be served a la russe, around the table. Amanda gasped slightly as she released control.

“There, isn’t that remarkable, Sir Simon?” Buxom Mrs. Montworth flashed a smile at Simon, the wealthiest of her guests. “I don’t know anyone with the strength of mind my Amanda has, do you? Well, not anyone who is anyone, shall we say?”

“No, you did quite well.” Simon smiled politely, forbearing to point out that for all the money John Montworth’s ironworks brought in, in London society the Montworths were emphatically not anyone.  Amanda performing a servant’s duties only confirmed that, as the poor girl undoubtedly knew. “A strong mind is—an asset to the Empire.”

“When the turtle soup comes out, Amanda,” Mrs. Montworth went on, “I think you should levitate—”

“Oh, no, my dear Mrs. Montworth,” Simon said quickly, remembering soup spurting from a shattered tureen at another dinner he’d attended. Besides, Amanda had been embarrassed enough. “A girl as lovely and delicate as Amanda, no matter how strong her vril, should be careful not to overexert herself.” As Mrs. Montworth simpered and nodded, Amanda, who looked as delicate as one of her father’s foundry workers, smiled her thanks at Simon.

“That’s enough entertainment for this evening,” John Montworth said in his north-country accent. “Carmody?” Carmody, the butler, gestured for the footmen to resume their duties; it was a faux pas for Montworth to address a servant during dinner, but the past few minutes had utterly nonplussed the staff.

Simon considered Amanda sensible and good-hearted. It wasn’t her fault her vril manifested as a crude, physical ability, nor that her mother was as blind to the social graces as some men to colors. Fortunately, with several months before the start of the Season, the guests had few people they could gossip with—and there’d be much better gossip by January, when the Montworths presented Amanda at court.

“‘Preciate your help, Sir Simon.” John Montworth said, clipping off the end of his cigar as a servant filled Simon’s glass. The women had left the room moments before, allowing the men a half-hour or so to indulge themselves. “Mrs. Montworth’s dreadful proud of our girl having vril, she is—I try to tell her to be more discreet but—”

“It’s been a new world these past eight years,” Simon said, savoring Montworth’s peerless port. “Too new to have all the polite niceties of psychic usage down pat.” A courteous lie; everyone knew physical manifestations of mentalist power were completely inappropriate in society.

“You mean like yourself assisting Scotland Yard?” Thin, pallid Ronald Carpenter, Duke of Falsworth, smirked and blew a plume of smoke. “A man of your impeccable pedigree, mingling with the lowest orders? Gilbert and Sullivan could make a wonderful comic opera out of it if you ask me.”

“I don’t believe I did.” Simon’s anger surged up again, but the smile beneath his thin mustache stayed coldly formal. “And there is nothing comical about the beasts who use vril to prey upon others.” Like Pearson Bartlett, who could mesmerize a woman to put a noose around her own neck. “I do my duty to England, nothing more.”

His Grace met Simon’s cold stare, then looked away with affected unconcern. Dukes far outranked baronets, but Falsworth’s title was new, and the man was still insecure. A Taggart was never insecure.

“Men like your Inspector Hudnall have my highest respect,” Moran said to Simon. As usual the colonel had stuck with whiskey instead of port. “In the jungle or the London streets, it takes a sharp man to hunt predators successfully. And who’s better suited than you, Sir Simon, to the sport of hunting mentalists?”

“Hardly sport.” Simon replied. “Unlike you, colonel, I consider hunting man-eaters a public service, not an adventure.”

“But men like that are evolutionary dead ends,” Montworth said. “Thanks to Lady Helena, all mankind—almost all—will ultimately be elevated to a higher plane.” His glance had lit upon Simon at the “almost.” “The murderers, the butchers, the Varneys of the present day will become fairytales, like ogres or Bluebeard, in the world that is to come.”

It was a typical Theosophist sentiment, but Simon found he was in no mood to argue with it.

By the time Fraser Sherman graduated college he’d lost interest in his degree field. He tried writing and discovered he liked it. Since then he’s spent ten years as a journalist, sold two dozen short stories and five film reference books. His most recent book was the self-published Undead Sexist Cliches, about the stupidity of misogynist beliefs.

Although born in England, Fraser spent most of his life in Northwest Florida. He’d be there still if he hadn’t met his dream woman and moved to Durham NC to be with her. They’ve been married 11 years and are the proud parents of two small dogs and two half-domesticated cats. 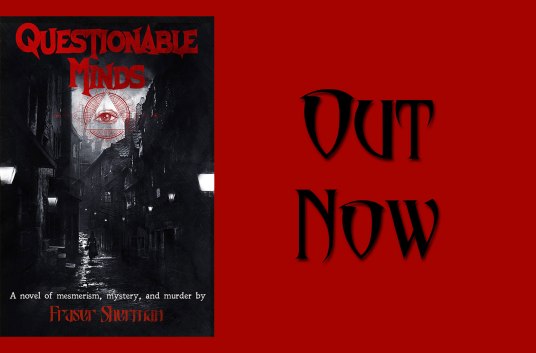