Blog Tour: Sparks in the Dark by James Siewert

Sparks in the Dark | James Siewert

Space: Where discovery and danger are two sides of the same coin.

Meet Albert ‘Buzz’ Buchanan, a retired space marine now freelancing as a gun for hire, who finds himself accepting a deal too good to turn down, even if it’s too good to be true.

Meet Thomas Cutter, a star-ship engineer who’s a lot more than what he first seems. He seeks knowledge and adventure, and the offer to team-up with the sexy space marine is just what Cutter’s been waiting for.

As our two heroes set out, they encounter more than they bargained for: a discovery of a lifetime, but only if they can escape with their lives. Will the galaxy reward them for their bravery, or will they fall victim to the great unknown?

Join Buzz and Cutter in their very first episode as they journey across the galaxy, finding high adventure and untold dangers in the darkness of space … along with discovering a friendship that promises so much more.

I see him, standing in the line-up to get into one of the numerous Bow Ties clubs—The Bull & Tackle, a low-key, pub-like establishment well known as the hunting grounds for men on the prowl for other men, without all the noise of a dance bar. I myself was headed to QuaTzar—the prime-time, holo-powered disco-nasium that attracts the partygoers of the galaxy, but after catching a glimpse of the hefty hulk of a man waiting in line for the pub, I changed my mind.

Broad shoulders that narrow to a solid waist, heavily muscled frame, tall and with a buzzed blond haircut so short he’s nearly bald. He’s not a ripped Adonis—there’s some heft and bulk to him that suggests he’s not afraid of a good meal, sorta like I am. Even though his firm backside is turned to me, I can tell this one’s going to be a looker.

He’s dressed in tight tan breeches, tucked into heavy workman’s spacer-boots, and he wears a khaki tank top that shows off his impressively built arm muscles. His dark leather belt has a pistol holder strapped to one side, though it’s currently empty (all weapons are checked at the security airlock to the station). Fair-skinned, but with a rich tan, like he’s been in the sun a lot.

He’s standing fifth in line from the entrance, which is twenty men deep. I gotta catch his attention somehow, so I walk to the front of the line, making my way to the automaton bouncer guarding the entrance. I ask the machine how long the wait will be, and after I get the answer, I turn, my eyes finding and locking on Mr. Number Five.

Ah, he is a looker!  Strong, classically masculine features—wide jaw, firm squared chin, proud, straight nose. Wears a short blond beard, kept neatly trimmed, but not stylised. Mouth looks like it was built just for kissing. Incredible eyes too—blue like mine, but more on the green side, like stormy waters. Older than I appear to be, but not by a lot—there’s some wisdom in his handsome face as much as there is quiet strength.

I can’t help but give a low smile in appreciation at such a fine example of a man in the prime of his life, and my trick’s done its job—Mr. Five catches me sneaking a look at him, and gives me that deep stare that clearly shows he likes what he sees too. As I walk past him, I give him a quick nod of my head in greeting, and he’s fast to respond.

‘How long did the ‘bot say the wait was?’ he asks, his rumbly voice causing a delightful shiver in me.

‘Thirty minutes or so,’ I reply, sounding blasé. ‘Too much of a wait for me.’

‘Same,’ Mr. Five says. There’s a short pause as he inspects the line, then looks back at me, the corner of his lips curling. ‘You wanna find another club with me?’

I pretend to ponder the question for a believable amount of time. ‘Sounds good, you got something in mind?’

He steps out of the line, closer to me. Man, he’s tall, a good twenty centimetres on me, but we’ve got the same muscled build, so it’s not a case of David versus Goliath here. As his eyes wander over me, I can tell that he appreciates what he’s seeing, and I find I’m giving him the same grin he’s giving me.

‘Kinda hungry,’ he answers, his tone low and inviting. ‘We could go somewhere quiet, get a little something to eat.’

‘Got me a suite in the upper-levels,’ I say, casually. ‘Can always order room service.’

A split second is all the time it takes for him to answer. ‘Sounds perfect. Lead the way. Name’s Buzz, what’s yours?’

His smile broadens. ‘Good to meetcha, Cutter.’ He extends one of his meaty hands, covered by a fingerless gunman’s glove, and I shake it, firmly.

‘Likewise, Buzz,’ I reply, genuinely, and flash him an appreciative smile. I extend my hand, showing him the way towards the lifts to the upper levels.

Ten minutes later, we’re up in my suite, and I’ve already got his shirt 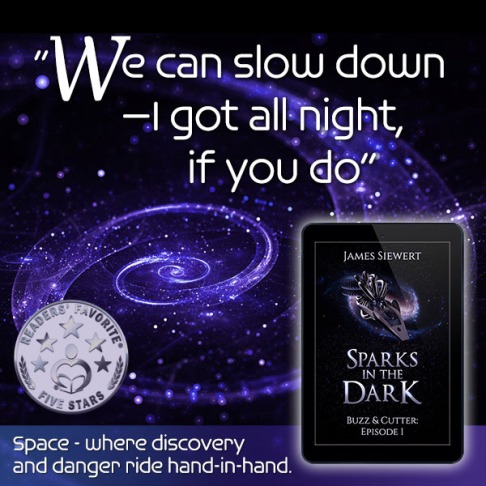 Taking matters into his own hand, James seeks to share high adventure, low-angst stories where the heroes are solid blokes who take centre stage. Come join the adventure and explore bold new worlds full of authentic characters, gripping scenes, lush imagination and a touch of mushy stuff – there’s a whole galaxy waiting for you to discover!

James is giving away a $25 Amazon Gift Card with this tour.