Posted on September 8, 2022 by Mirrigold

Naser Kazemi has never met a problem a good spending plan couldn’t fix. But working as the chief accountant for his best friend’s resort isn’t turning out to be the dream job he’d hoped for. It doesn’t help that his fashion designer sister is planning an event that just might bring Sapphire Cove crashing down all around them. When the wild party unexpectedly reunites him with Mason Worther, the gorgeous former jock who made his high school experience a living hell, things go from bad to seductive.

The former golden boy’s adult life is a mess, and he knows it’s time to reform his hard partying ways. But for Mason, cleaning up his act means cleaning up his prior misdeeds. And he plans to start with Naser, by submitting to whatever the man demands of him to make things right. The offer ignites an all-consuming passion both men have denied for years. But can they confront their painful past without losing each other in the process?

“I won’t be here long. I’ve got to get to work.” Naser set the papers in front of Mason and gestured for him to read. Mason skimmed, recognizing the bare bones of an investment agreement. Some of the language seemed boilerplate, and some of it seemed pure Naser. Once he had the gist of it, Mason set the contract down. “I thought your sister didn’t need investors.”

Naser smiled. “Far be it from me to deny a man a chance at redemption.”

“As far as we are from Saturday morning, apparently. No offense, but this is one of the worst investment agreements I’ve ever seen, Naser. The rate of return is basically zero. And the dollar amounts and schedule are both blank.”

Naser smiled and sank into the chair he’d declined a moment before. “The investor in question knows nothing about the fashion industry and has not expressed a desire to learn. In light of that, giving the investor any sort of creative control over the business in question would be a grievous mistake for all involved. Further, the investor’s motives for investing lie far outside any concerns that could be considered…businesslike.”

“The investor is sitting right here, and he doesn’t remember making any of these statements. Also, I think it’s cute that you start sentences with further out loud and not just in emails.”

Naser raised one eyebrow. “The investor is known to have a spotty memory. And there are suggestions he has issues with reliability and consistency as well, so any proposed payment schedule should be…dramatically shortened.”

“The investor has questions,” Mason said.

Naser spread his hands in a welcoming gesture.

“Did you reconsider my offer because you got more info about the state of your sister’s business after you left my house?”

Mason flinched. Naser’s stony expression said that had been his intention—and that his sister most certainly did need new investors. “How are those two questions related?”

“We’re only sitting here because for three years you and your buddies subjected me to a form of sexual harassment that’s still considered semi-acceptable in most secondary school settings.”

Mason took a deep breath. The door was still closed. And locked.

Naser seemed startled by the direct answer. He nodded slowly, his tongue making a lump under his upper lip. As if this whole thing would have been easier for him if Mason had deflected or lied, and now he was having to reassess.

Naser smoothed invisible lint off the thighs of his slacks. “I knew you were bisexual,” he muttered.

“I don’t know, maybe you were gay and closeted. But Fareena’s Fareena. She’s not going to waste time on a guy that doesn’t have a genuine attraction to her.”

“Do your buddies know?” Naser was staring at him, eyes blazing with anger.

The question knocked Mason back in his chair an inch. “Tim’s been dead five years.”

“You don’t need to be. He was terrible to you. The Coach Harris email was all his idea.”

Naser drew a deep breath. “Thanks for letting me off the hook, I guess. How did he pass away?”

“Pills. He always said they were for a sports injury from USC, but he warmed the bench the whole time, so that story never made sense. I think he really liked pills. We’re not sure if it was deliberate or if he overshot the mark. There wasn’t a note, but his life wasn’t in a great place.”

Remembering those last few visits with Tim now that he was trying to get sober was more painful than he’d anticipated. Back then, Mason had thought he’d had his shit together, and by comparison to his old friend, who’d dropped out of college and was working odd handyman jobs for his uncle’s contracting company, it had certainly seemed that way. He and Chadwick had even talked about hauling Tim into a rehab—over beers.

Naser nodded, and a silence fell. A silence that, like everything else between them, seemed to bend the laws of time.

“And Chadwick Brody?” Naser’s voice was drawstring tight, but his gaze was steady and penetrating, full of the unspoken recognition that Chadwick had always been the worst out of the three.

Naser was staring at him, waiting for him to say something further. Sensing, it seemed, that Mason’s answer hadn’t been complete or entirely truthful. But maybe expressing hesitation or shame around the topic of Chadwick was what Naser needed to see.

“And no, he doesn’t know that I’m bi. And yes, if you were to walk out of here right now and share this information with the world, you could really screw up my already screwed-up life. Especially with the man down the hall.”

“I wouldn’t blame you if you did.”

For a second, Mason thought the guy might soften toward him.

“I know what it feels like to be outed before you’re ready,” Naser said. “I’d never inflict that on someone else.”

“We didn’t out you. Everything we did was wrong, but it wasn’t like we knew for sure that you were gay.”

“Yes, you did. You knew every time I looked at you. That’s why you did it.”

Was Naser admitting to having been as hot for Mason as Mason had been for him?

Maybe so, because Naser looked away before Mason did.

Mason picked up the contract. He did some quick math in his head, quick enough that he couldn’t think too long and hard about the consequences of what he was about to do. He wrote down a figure, followed by a schedule, then he flipped to the signature page and signed his name. Pari Kazemi, he saw, had yet to add her own.

When he handed the contract back to Naser, the guy read Mason’s additions and went stone still.

“A lump sum payment of one hundred grand on signing?” Naser sounded winded. Mason nodded. “You don’t have to buy my silence, Mason.”

“I’m not trying to buy anything. I’m trying to make this right.”

Naser swallowed and looked to the paper again as if he thought his eyes were deceiving him. “Okay, well, obviously nothing’s final until my sister countersigns.”

“I’ll be here if anyone has questions.”

“Proof of funds would be nice.”

“You saw the house.”

Naser stood. “It’s not your house. I did a title check.”

Mason laughed breathily. “Well, you’re good at your job. I can have proof of funds to you by the end of the week.”

“Good. I’m not saying a word to her until after then. I don’t want to get her hopes up.”

Naser turned and headed for the door. Mason figured his speed was an effort to conceal any evidence of his gratitude.

He stopped, fingers resting on the knob. They both seemed frozen by knowledge that if Naser opened the door even a crack before they were done talking, he might let some of Mason’s secrets spill out into the world.

“What was the worst thing we did?” Mason asked as gently as he could.

Mason prepared himself for another verbal strike. But when Naser turned to him, head slightly bowed, he saw the man was struggling to swim through a sea of painful memories, struggling to get his arms around one without drowning, and the twist in Mason’s gut felt almost as bad as a hangover.

C. Travis Rice is the pseudonym New York Times bestselling novelist Christopher Rice devotes to steamy tales of romance between men. Christopher has published multiple bestselling books in multiple genres and been the recipient of a Lambda Literary Award.

With his mother, Anne Rice, he is an executive producer on the AMC Studios adaptations of her novels The Vampire Chronicles and The Lives of the Mayfair Witches. Together with his best friend and producing partner, New York Times bestselling novelist, Eric Shaw Quinn, he runs the production company Dinner Partners.

Among other projects, they produce the podcast and video network, TDPS, which you can find at www.TheDinnerPartyShow.com. 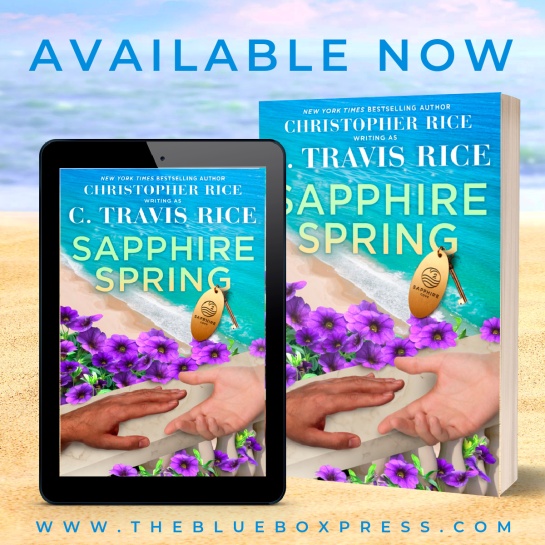