So very happy to be back with Charlie’s shifters 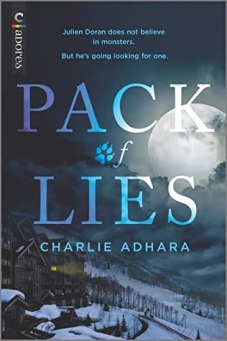 Pack of Lies by Charlie Adhara

I hadn’t realised how much I missed being in Charlie Adhara’s world until I heard she was writing a spin-off from her Big Bad Wolf series.

Eli Smith is the star of this series, the cocky but incredibly vulnerable shifter who’s also Oliver’s ex, who we last saw helping him and Coop in Cry Wolf.

He’s ‘happily’ managing the retreat for runaway rebel wolves that Coop and Park have set up on the old Neilson lands from one of their earlier cases – even though he has no visitors yet – when he crosses paths with faded Hollywood star Julien Doran.

Both men have secrets to hide, but there’s also a kindred connection which sparks between them as they get embroiled in the mystery surrounding Blue Tail Resort tucked away in a quiet corner of the Appalachian Mountains.

I can’t tell you how much I loved this plot without giving it away, so I’ll just say that these two have as rocky a start as Coop and Park did but with all the added complications of Julien knowing nothing about wolves.

The pacing is superb, starting off with a hint of mystery and a creepy feeling that something isn’t right, before it picks up and heads off into heart pounding adrenaline-packed action.

It’s also got the same subversive humour, as Eli’s smart mouth gets him both in and out of trouble when things start kicking off.

Now, unlike the majority of the other books in this universe, I did actually guess who was the baddie but I didn’t have a clue for the ‘why’ and I suspect that will be part of the series long ARC.

This isn’t out until September but I’m already having withdrawal symptoms and desperately needing to know when book two will arrive!

#ARC kindly received from Carina Press via NetGalley in return for an honest and unbiased review.