Release Blitz: A Beach Far Away by BL Maxwell

A Beach Far Away | BL Maxwell

Falling in love wasn’t on the itinerary

Ryan Stone can’t wait to put his toes in the sand at the famous Bondi Beach. When he arrives after a flight that was far too long, and having not slept or eaten, all he can do is stare out at the beautiful expanse of white sand and blue ocean in awe. And when a blond guy asks him to play footy, he agrees, even if he doesn’t know for sure what that is.

Ollie Hughes thinks a day at the beach is just what he needs to take his mind off work. When he sees the cute but rumpled guy sitting by himself in the sand, he’s drawn to him. The more time they spend together, the less he wants the day to end. They end up spending a few days together, those few days turn into weeks, and neither is ready for their time together to end.

A lot of chemistry, and a little bit of luck make for an interesting day at the beach that both men are reluctant to end. Time and distance could be their biggest obstacle, but maybe some things are just meant to be. 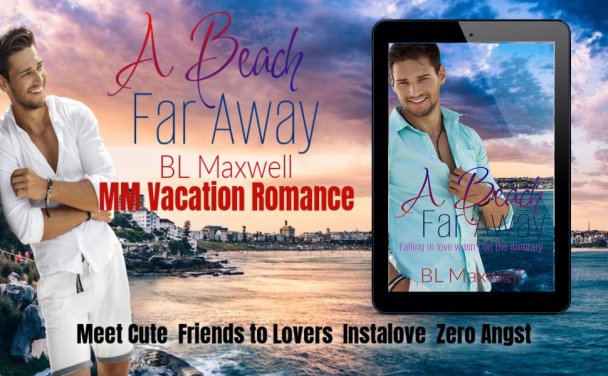 Slipping my shoes and socks off, I carried them with me to the water’s edge. The water was warmer than it was on our side of the planet, but the last time I’d been to the ocean had been near Eureka. The water was never warm there. I walked out enough for the water to hit near my knee.

“Oi, mate. You don’t want to be going out there. It’s a wicked rip. Pull you right out without warning and you’ll end up across the ditch in New Zealand.” A very tanned, very blond guy about my age, wearing an aqua and dark blue shirt with Lifeguard emblazoned on his chest, crossed his arms and planted his feet.

“If I had a dollar for every time I’d heard that, I’d be a rich man. Most that have said it, are now about fifty meters offshore.”

My head whipped in the direction he’d indicated, before he burst out in laughter.

“Just messin’ with ya. But seriously, don’t go out past your knees. Everyone thinks they can handle it, but it’ll drag you out before you can get your feet under you.” He stood and waited for me to walk out of the water and waved when I relented and walked back over to the grassy area.

Leaning my head back I let the heat of the sun warm my skin as my feet dried off. The sound of the ocean and children playing on the beach were all I could hear right now. The long flight started to weigh on me, and I knew if I kept my eyes closed much longer, I’d be asleep. I still needed to find a place to stay so I slipped my shoes on and walked toward the other end of the beach.

People were everywhere, and dogs, and cars, and even what looked like a group of lifeguard trainees. “Hey, you up for some footy?” a guy with long, curly blond hair that hung in soft waves around his face asked as he jogged closer.

I wasn’t sure exactly what he meant.

“Yeah, we can just toss it around.” He threw the football up and caught it with a grin.

“Sure.” I stood and followed him down to where the sand had been raked smooth. People were gathered around the area, but most were at the edges of the immaculate sand. I set my backpack down on the edge and followed him. Noticing he was barefoot, I hurried back to take my shoes off.

As soon as I was on the sand again, he tossed the ball to me and turned to run. I threw it back and he made an amazing diving catch. We both laughed as he dusted off sand before tossing it back to me. “What’s your name?”

“Ollie, Ollie Hughes.” He caught the ball and did some weird jumping throwing thing that looked funny as hell but did the job.

I caught it and before I could toss it back, he was running at me. At first, I didn’t realize what he was doing but then he tackled me. We rolled around laughing until I was able to get away and run farther down the beach. When he got up and started to come at me, I threw the ball to him and turned to chase him down. Both of us laughed as we crashed together onto the sand and wrestled around to get the ball.

He got a grip on it and bolted away from me as a few people near us clapped. “Oh, I see how it is now,” I yelled and gave chase. He ran around other people that were sitting either in a chair or on a towel, and the ones standing tried to move out of the way.

Finally, when he got to an open area, he turned around and stopped with the ball tucked under his arm. “How long are you here for?” 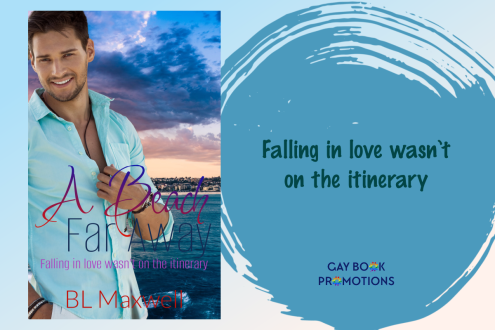 BL Maxwell grew up in a small town listening to her grandfather spin tales about his childhood. Later she became an avid reader and after a certain vampire series she became obsessed with fanfiction.

She soon discovered Slash fanfiction and later discovered the MM genre and was hooked.