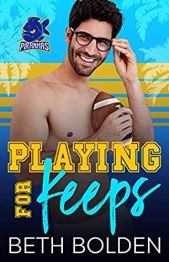 Playing for Keeps by Beth Bolden

It’s no secret that I’m a huge fan of sports romances and that I love Beth’s books, but with this series opener we get an absolute belter of a story.

With relatively little angsting, a thankful lack of miscommunication or lack of conversation which would solve any issues, Beau and Sebastian fall helplessly in love in spite of all the reasons why they shouldn’t.

It’s a wonderful narrative which gives us a man heading towards the end of a successful NFL career as a cornerback and being given a second lease of life in a new position – if only he has the guts to take both the role and the advice from the man on the side lines – his coach’s son.

Sebastian Howard is a classic Beth character, he’s biracial, strong-willed, stubborn and determined, but he’s also kind, he’s willing to take risks and he’s been not exactly hiding his sexuality so much as not giving any time to relationships because of his career.

Beau Dawson, the man tasked with running Seb through the transition to playing the new safety position, is someone who’s always had to fight because he’s been an out and proud gay man working alongside his top College Coach father Asa, for years. He fights prejudice, allegations he’s only there because of his father and he fights his instant attraction to Sebastian Howard.

And OMG how much UST is there in this book! It bounces off the page in their first encounters as both men struggle with the attraction they don’t want to acknowledge.

I loved this book so much. It’s within Beth’s expanded universe so the Piranhas are the team my absolute favourite Beth character – quarterback Colin O’Connor – used to play for and they’re struggling to rebuild after his retirement.

There’s layers of different tensions throughout the story, from the fears their relationship could damage the team dynamics and interfere with Beau’s professional reputation, there’s the switch to a new position and having to accept a cocky and ignorant replacement taking your place which Seb struggles with.

There’s the other LGBTQ couple within the team, who are introduced in a short novella available in the Your Book Boyfriend’s Boyfriend Prolific Works year long giveaway, and there’s potential for other relationships happening in at least another two pairs.

Oh and Asa himself, there’s definitely something going on there which I have already told Beth I have to KNOW about please 😂

So, if you like your sports romances to be steaming hot, have great LGBTQ representation but with the realistic struggles you’d expect from such a macho world, actually include plenty of on pitch game narrative too, this series is definitely for you.

As always, I beta read this book for Beth.