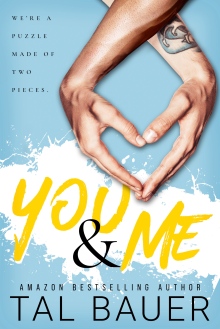 You & Me by Tal Bauer

The slow burn and Luke’s dawning awareness of his feelings was a masterstroke. Such a heartfelt and honest narrative.

And the friendship between the boys was another added depth which just brought more richness and emotional reward.

Exactly the right kind of angsting for me with no unnecessary dramas just for the sake of it. From the first opening sentence this book grabbed me by the heart and didn’t let go until the wonderful Epilogue.

Tal’s known for his utterly brilliant romantic suspense and political thrillers where two men fall in love within a world of treachery and danger. But with You & Me, he took things to a different level again.

Everything about it felt so personal, although I’m not a widower bringing up a surly teenager and having a bisexual awakening, it didn’t matter. The emotional highs and lows, the unconditional way a parent loves (or bloody well should do!) their child no matter how much that child rejects them, they all resonated with me.

The Friday Night Lights feel of being a footballing family, with sons who could take the team to championship level – again something I have no familiarity with – was brought to life so vividly I could hear the noise of the stadium, the expectation of the crowd.

This might be a relatively low angst book for Tal in terms of the setting and subject, but have no doubt, it’s still an emotional rollercoaster of a ride which goes through some real lows at times which were heart-breaking to read.

But the two men at the centre of this book, Luke and Landon, are so beautifully expressed that you are willing them on through every step of the journey from friendship and into something that looks a lot like love.

The setting, the other characters, they’re all icing on the cake to what is essentially one man’s journey back to not only connecting with his son, but to finding his own way back into life, having been mired in sadness and lost opportunities.