Another wonderful visit to Crofton Hall and her inhabitants 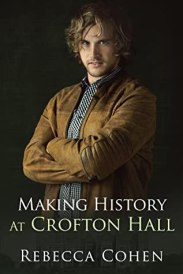 I love it when Rebecca mixes up her Crofton series by writing a modern couple but with links back to the Elizabethan/Stuart era 1st Earl Anthony and his actor lover Sebastian.

This one follows on from the first Modern Crofton in so much as it mentions the events of that book and then takes a new journey into the past as a historical documentary series comes to film at Crofton Hall and investigate the historical letters found hidden in the wall.

The main couple here are Dara, the historian that the 16th Earl Ben hires to document all the historical artefacts and papers, and Nathan, the producer of the TV show filming at the Hall but we still get to catch up with Ben and his estate manager lover Ashley.

What I liked the best about this romance is that there’s very little drama, it’s a sweet slow burn as Nathan is a widower of only four years, his husband dying only a year after they’d got married. Dara’s also been burned by unfeeling older academic boyfriends who’ve never put him first.

While it does work as a standalone, I think much greater enjoyment is gained if you’ve also read the historical trilogy The Crofton Chronicles as it’s a bit like an “inside joke” feeling when you already know what the historians are going to discover.

There’s some humour, some good conversation and, thankfully, very little in the way of misunderstanding or miscommunication, and there’s some really lovely historical romantic touches which Nathan uses to show Dara how he feels.

Overall, this is a smashing second entry in the contemporary Crofton series.

NOTE: As ever, I beta read for Rebecca.