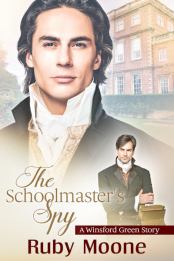 The Schoolmaster’s Spy by Ruby Moone

I absolutely adore Ruby Moone’s historical writing and with her latest visit to the world of Winsford Green, she has absolutely excelled.

Alien Office spy Mark Dexter is everything I want in a book boyfriend. He’s principled but capable of doing what needs doing if it means protecting the State.

He’s a little bit battered by life, the youngest son of a Viscount who always hated him because he wasn’t his actual father, he’s had a lonely and somewhat wild life.

The only comfort he found was at boarding school where Felix Brook was one of the few schoolmasters who took notice and cared enough to engage him in his education.

Felix is an absolute gem of a man. There isn’t a huge age gap between them, Felix was a young schoolmaster at Hestingley’s, but he’s so shy and hides his passions away – until Dexter comes back to an Old Boys event while investigating the new headmaster.

I won’t go into the plot, suffice it to say it absolutely worked for me, the trickery, intricacies and careful way the narrative unfolds is a headrush, filled with adrenaline and adventure.

Both Mark and Felix have the very things which make them who they are tested – Dexter’s loyalty and Brook’s role as an educator – and for a while it looks like there will be no way out.

But Ruby skillfully manipulates the story so that all ends up with a race to the truth and an ending which is firmly grounded in the realities of life in 1815 for two men who love men.

An absolutely wonderful return to Winsford Green and now please can we have the Major and Mr Edwards’ story and what’s going on with the Marquess of Winsford and Dexter’s boss at the Alien Office Ruby?!

Read all my reviews.