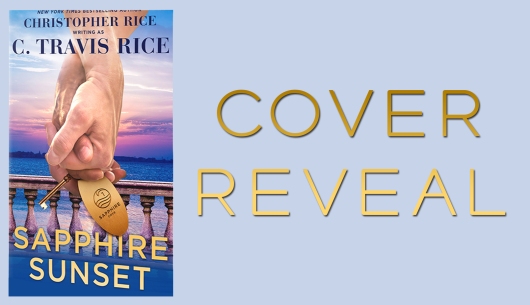 In SAPPHIRE SUNSET, the first Sapphire Cove novel, he transports you to a beautiful luxury resort on the sparkling Southern California coast where strong willed heroes release the shame that blocks their heart’s desires.

Logan Murdoch is a fighter, a survivor, and a provider. When he leaves a distinguished career in the Marine Corps to work security at a luxury beachfront resort, he’s got one objective: pay his father’s mounting medical bills.

That means Connor Harcourt, the irresistibly handsome scion of the wealthy family that owns Sapphire Cove, is strictly off limits, despite his sassy swagger and beautiful blue eyes. Logan’s life is all about sacrifices; Connor is privilege personified. But temptation is a beast that demands to be fed, and a furtive kiss ignites instant passion, forcing Logan to slam the brakes. Hard.

Haunted by their frustrated attraction, the two men find themselves hurled back together when a headline-making scandal threatens to ruin the resort they both love.

This time, there’s no easy escape from the magnetic pull of their white-hot desire. Will saving Sapphire Cove help forge the union they crave, or will it drive them apart once more?

A New York Times bestseller since his first publication at the age of twenty-two, Christopher Rice is the author of BONE MUSIC (an Amazon Charts bestseller and the first novel in the Burning Girl series) and its sequels, BLOOD ECHO and BLOOD VICTORY, along with Bram Stoker finalists THE HEAVENS RISE and THE VINES.

His second novel, THE SNOW GARDEN, won a Lambda Literary Award. He is an executive producer on the AMC Studios adaptations of The Vampire Chronicles and The Lives of the Mayfair Witches by Anne Rice, and he also collaborated with her on RAMSES THE DAMNED: THE PASSION OF CLEOPATRA, a sequel to her phenomenally popular novel THE MUMMY OR RAMSES THE DAMNED.

Together with his best friend and producing partner, New York Times bestselling novelist, Eric Shaw Quinn, he runs the podcast and video network, TDPS, which you can find at http://www.TheDinnerPartyShow.com.

Born in the San Francisco Bay Area , Christopher moved to New Orleans at the age of ten and later attended both Brown University and New York University’s Tisch School of the Arts before settling in West Hollywood, California, the city he currently calls home.