Release Blitz: I’m Not Your Enemy by Cara Dee

I’m Not Your Enemy | Cara Dee 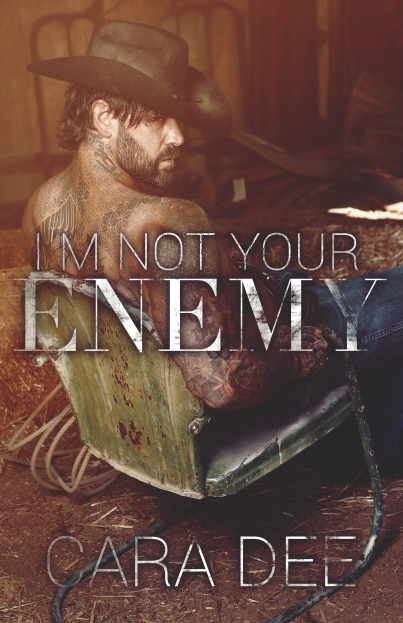 Sebastian was right. I was a coward. I ran my closeted tail all the way back to Georgia. Once I got there, I had no place left to hide. My life imploded.

But when I was welcome nowhere, I still had to go somewhere. I could barely look my sister in the eye, facing Sebastian didn’t even exist on my radar, and I was prepared for my brother-in-law’s protective hostility.

I just didn’t have a choice. For once in my life, I wanted redemption. I wanted to belong somewhere, and I was ready to work for it. Sebastian was the exception—hard no. I might have screwed up royally, but he wasn’t so damn innocent.

He’d hurt me too, and he better not push me. In fact, it was best we avoided each other altogether. So it didn’t make a lick of sense for me to seek him out to provoke a reaction. 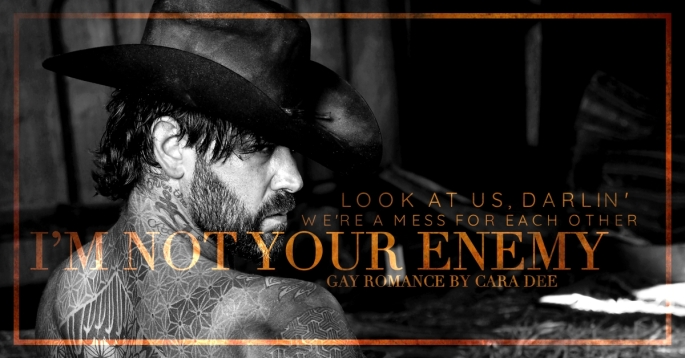 It was still weird for me to be part of a family dinner where no one said grace. It’d been the rule for as long as I’d lived. If dinner was among family and you sat at a table, someone said grace.

I removed my ball cap and left it on my lap.

“You think we have too much space at home?” Soph smirked.

Teddy grinned sheepishly. “No, but we could go anywhere!”

I chuckled and grabbed myself a Coke.

“Where would all your toys go?” Dylan asked.

Teddy hadn’t considered that. “Maybe in my room at Bastian’s house?”

Sebastian shot him a little grin but didn’t say anything. He was usually so vocal. Now, because I was here, shit was weird. He hadn’t looked my way once. Not a glance as far as I knew.

Isabella was getting fussy in Dylan’s arms, and Soph said she couldn’t put off feeding her any longer. She excused herself to head inside and nurse the little one.

“Don’t step on Oppy and Percy, please,” I said.

“Oh! I wanna see them, Uncle Blake!” Teddy pleaded and almost knocked back his chair when he stood up. As if I could deny him. “Momma, I go with you.” He grabbed a new pizza slice and tumbled toward Soph.

Dylan turned a perturbed look Soph’s way. “You’re leaving me with those two?” He just didn’t know how to whisper.

Soph thought that was hilarious and just giggled in response. Then she disappeared into the trailer with the kids, and the tension automatically turned awkward and agitated. The latter came from Sebastian, because without Teddy around, he didn’t have to pretend.

“Are you gonna fucking eat or what?” Sebastian asked irritably.

I glanced at Dylan, who was in the middle of finishing a slice, and it dawned on me that the question was for me.

Sebastian flicked me an impatient look. “You’ve lost weight, and you’re not eating. Are you sick or just dumber than you look?”

“This is nice,” Dylan said. “We should do this more often.”

I furrowed my brow and wondered what the hell Sebastian’s problem was. Okay, I could venture a guess, but if he wanted to avoid me, avoid talking to me, he didn’t have to worry about what I ate.

“Dumber than you look, then. Because yeah, you have.” He tossed a crust into one of the boxes and leaned back, his posture and expression saying he was letting it go. He didn’t wanna talk anymore.

“So how are the Pugs doing, Blake?” Dylan interjected. “Or was it Bulldogs?”

I slid my stare to Dylan instead and let some humor seep in. Bless him. “You don’t have to run interference, buddy. When Sebastian’s ready to hash things out like a real man, these passive-aggressive little bitch fits will be history.”

“Boy, there’s nothing passive about my aggression,” Sebastian laughed. “Unlike that snide remark you just offered.”

“What was that, baby? Yeah, I’ll be right there.” Dylan abruptly left his seat and fled inside.

Christ. We knew how to clear a room. Or a patio.

“We might as well get this out of the way so we can move on,” Sebastian told me, and I lifted a brow, admittedly curious. “Soph told me you were building them a house, and it goes without saying that I will be here to help out whenever I can. But as far as I’m concerned, there’s no reason you and I gotta talk. We’ll act civil around Teddy, and then—” He shrugged. “I’ll just wait until you run back into your closet in Georgia again.”

Nice speech. He had it all figured out, huh?

“All right.” I nodded with a dip of my chin. “I take it you’re not interested in an apology for leaving the way I did.”

He smiled faintly, a humorless twist of his lips that left me a few degrees colder. “No, you can save your excuses for someone who gives a rat’s ass.”

“Got it,” I replied tightly.

I’m often awkwardly silent or, if the topic interests me, a chronic rambler. In other words, I can discuss writing forever and ever. Fiction, in particular. The love story—while a huge draw and constantly present—is secondary for me, because there’s so much more to writing romance fiction than just making two (or more) people fall in love and have hot sex.

There’s a world to build, characters to develop, interests to create, and a topic or two to research thoroughly.

Every book is a challenge for me, an opportunity to learn something new, and a puzzle to piece together. I want my characters to come to life, and the only way I know to do that is to give them substance—passions, history, goals, quirks, and strong opinions—and to let them evolve.

I want my men and women to be relatable. That means allowing room for everyday problems and, for lack of a better word, flaws. My characters will never be perfect.

I’m a writey person who loves to write. Always wanderlusting, twitterpating, kinking, cooking, baking, and geeking. There’s time for hockey and family, too. But mostly, I just love to write.