For many, the United States is a land of opportunity and new beginnings – unless you happen to be ‘different’ from everyone else. Hadi Shahir is one of those people, different in more ways than one. Hadi can manipulate fire; he is ‘Evolved’.

All he wants is a new life and new adventures in this land of opportunity. His dreams become endless nightmares, however, that begin with an inexplicable hate crime that leaves the young man traumatized and untrusting of the world around him.

A chance encounter with a pretty face cracks that shell, showing him that not everyone in Chicago is out to get him until a rash of violent, deadly fires breaks out around the city.

Suddenly, all eyes focus on Hadi when too many coincidences bring his abilities to the forefront. In a matter of moments, Hadi jumps to the top of the AEC’s most-wanted list. His quiet life as a bartender quickly turns into a tangled mess of chaos, lies, and murder that drag the entire city of Chicago down in flames with the remnants of Hadi’s ruined life.

He coughed, choking on the rainwater that streamed down the sides of his broken nose. Each droplet dripped down the back of his throat along with the copper tang of his own blood.

He took another gut punch to the stomach, curling in over the steel toe that delivered the painful blow. He wretched into the puddle beneath him, groaning pitifully after. The kicks continued, bruising his ribs, his sides and hips, his chest and back until he no longer had the strength to keep them away. Instead, he lay there, dead to the world around him, numb to the pain and hateful words spewed at him.

A violent hissing replaced the thunderous sound of falling rain. The taste and smell of copper evaporated into the odor of melting plastic.

“Get up!” someone barked in Arabic. The pain of the nightmare still lingered, but something about the barked order made Hadi Shahir’s limbs move, made him sit up and force his eyes open. Half of his room was on fire.

“Shit,” he cursed, immediately absorbing the flames into the palm of his hand. It burned the skin, reminding him of his curse. “Saleh, I’m sorry I-”

“You are late for work,” his cousin, Saleh, said heavily. “Mary already called. She is waiting for you.”

Hadi watched Saleh walk away with the fire extinguisher still in hand. The white foam was everywhere. There was absolutely nothing left of the television that once sat atop Hadi’s dresser. He could hear Nima, Saleh’s wife, asking if everything was all right as Saleh left the room and their baby girl crying from all the commotion Hadi caused.

The nightmare was the same every night.

Trust has been broken. Lives have been lost and most of Chicago burned to the ground. Blame is placed on those unfortunate enough to be born different; on Evolved. Demands for justice create a great deal of tension across the globe. The Agency for Evolved Control struggles to maintain order, spread too thin to combat a growing drug epidemic wreaking havoc across the populace.

James Kendall took an oath to protect the innocent and powerful alike. He is finding his new role as a member of the global security team, the Peacekeepers, is not all its cracked up to be. Saddled with two new partners and a growing number of disturbing Evolutionary episodes, he learns that the ones he trusted most have betrayed him.

In order to set things right, James is forced to make decisions that could alter the future in catastrophic and unforeseen ways and uncover a scheme that is years in the making; a scheme that may spell disaster for everyone he holds dear.

Michelle Schad, a Virginia author, has been writing stories of the fantastic, the horrific, and the mysterious for as long as her fingers have been able to hold a pen.

In a world that passes for ‘normal’, she is all of the ‘normal’ things one might expect: mother, wife, keeper of fur-babies. She is also a student of life, meaning if there is something to learn, she will learn it, thus making her a veritable font of only partially useful knowledge.

Win an Ecopy of the Beyond Human Series by Michelle Schad. 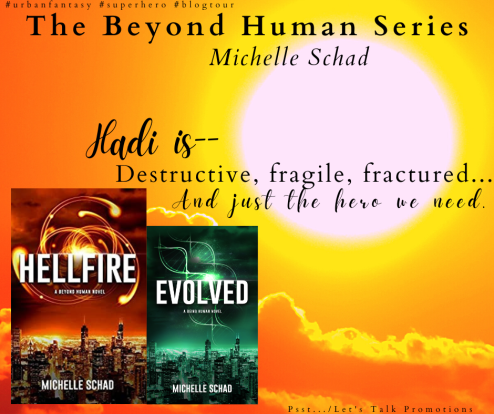