Blog Tour: Love on the Horizon by R.J. Peterson

Love on the Horizon | R.J. Peterson 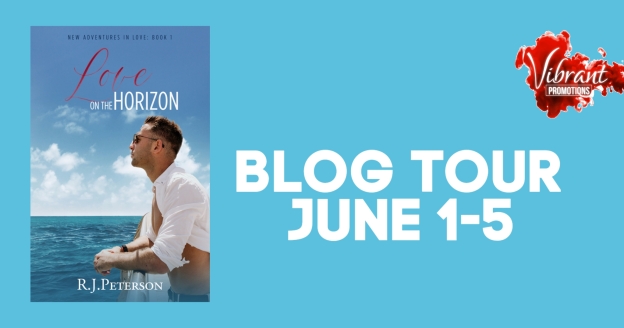 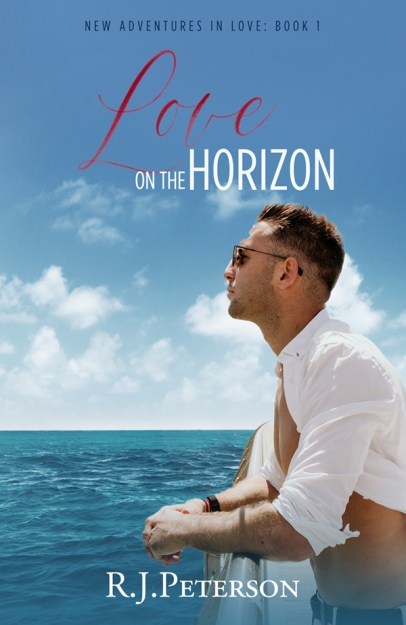 Two years after losing his husband, the last thing widower Rob Asher wants to do is go on a cruise-for-two by himself. But after some practical advice from his best friend, Rob realizes that his husband wouldn’t have wanted him to hide away from the world with only his grief for company. So despite some lingering doubts, Rob packs his bags for his cruise adventure and flies to Barcelona to board the Ocean Wanderer.

Actor Ben Rockingham has just finished a whirlwind promotional tour around Europe and is looking forward to a week long cruise so he can relax and unwind. He’s felt alone for far too long and doesn’t foresee that changing anytime soon. But a chance encounter in a hotel bar has Ben feeling things he hasn’t contemplated for a very long time.

He and Rob hit it off right away and Ben is both intrigued by and attracted to this conflicted man. Is it possible that Rob is the one who’s been missing from Ben’s life all these years, and can Ben help Rob move past his grief so they have a chance at a future together?

They have one week aboard the Ocean Wanderer to find out and the stakes are high on the high seas.

Ben rolled over and looked at the clock on the nightstand. The alarm on his phone would go off in fifteen minutes. Just enough time to lie there and think about yesterday. Meeting Rob at the bar had been a pleasant surprise. And though Rob recognized him right away, he didn’t act like he was an over-the-top fan who only wanted to chat with Ben for bragging rights later. He just seemed like an all-around nice guy.

Rob was handsome, but there was more to it than just his good looks. Sure, Ben had always found both men and women attractive, but no man had put butterflies in his stomach since Ryan back in college. Until now. Fuck, was there any chance that Rob maybe felt the same way? Yes, he was gay, but his husband died two years ago and he was obviously still in mourning; only natural considering how long they had been together.

What do I know? I haven’t had feelings like this for such a long time—wait, do I have feelings for Rob?

Something is definitely going on here, but I’m not really sure what. Ryan was a great boyfriend, but it was the ‘80s then and we had hidden our feelings from pretty much everyone. We’d known each other for years and just kind of fell into a romance after admitting that we found each other attractive. At the time, there was so much homophobia out there and neither one of us had been ready to be out and proud. Over time, we had drifted apart and then I met Caroline. And while we got along great at the beginning, our relationship had mostly been rocky, if I was being honest. We did have Kyle though, so it hadn’t been all bad.

“Okay,” he said aloud, “I had a short relationship with a guy thirty-plus years ago and then a longer relationship and marriage with a woman a few years after that, and not much of anything since then.” He paused a moment, trying to organize his thoughts. “Both of those relationships had taken a while to develop. I’d never experienced ‘love at first sight’ or ‘lust at first sight’ or whatever the hell this was. Sure, a few dates here and there, but nothing that really felt completely right. For so many years I thought that either I was bi or that Ryan was just a one-time thing.”

But now, after spending just a few hours with Rob, he’s all I can think about.

Ben remembered a movie set he had been on a few years ago. He’d been chatting with one of the crew one day and the guy mentioned that he was ‘demi.’

“Demi? What the hell is that?” Ben had wanted to know.

“Demisexual,” the guy had replied. “I like girls and I like guys, but unless I have an emotional connection to them, I can’t get serious. Casual sex just doesn’t do it for me, but if we connect emotionally, it’s magical.”

That had stuck in the back of Ben’s mind and sometimes he thought that maybe he was demisexual too. He had done a bit of research at one point and it seemed like the emotional connection took a bit of time to develop. That certainly fit in with what he’d experienced before. It had been so long since he felt anything for anyone, he had started to think maybe he was asexual. Now, those emotions were starting to stir again when he thought of Rob. Was this really happening?

Ben’s phone began to chime, so he reached over and shut off the alarm, then got up and began to get ready for the new day.

He is an avid reader, preferably while sipping a vodka martini or some bourbon on the rocks. RJ’s had a long and varied career, including library page, car wash attendant, customer service representative, interpreter for the deaf, travel agent, and graphic designer in the marijuana industry.

He also worked in banking for twenty-five years. In addition to starting up a writing career, he still works as a freelance designer, creating book covers and other items for several authors.

RJ loves to travel and has been on 40+ cruises. When not on a cruise, he and his husband live in New England.

Love On The Horizon is his first book. 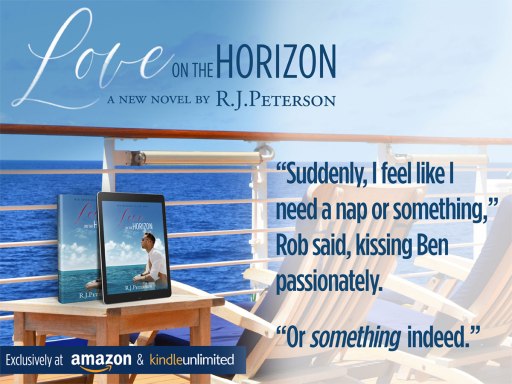