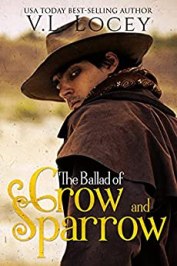 The Ballad of Crow and Sparrow by V.L. Locey

This is a really solid historical novel set in the Arizona deserts of the 1800s just as the railways were expanding their reach and the cattle barons were making a fortune.

It’s an interracial romance between Crow, who is half French Canadian and half Mohawk, and Spencer, who he nicknames Sparrow, one of the twin sons of a railroad tycoon.

The plot is an interesting one, I loved how Vicki wove it around Crow’s youthful naivety against the very much more worldly wise knowledge that Spencer has gained during his time away at school in New York.

Their meeting is very much not a “meet cute”, Crow saves Spencer during the robbery of his father’s train and then has to flee with him when the Pinkertons catch up with the outlaw gang he’s ended up getting involved with – see his youthful naivety.

I won’t go into more detail, it worked for me as a period piece. It felt historically accurate and definitely of the times, with the hateful ways the expansion into the west disturbed the Native American way of life.

The romance is very much slow burn but, again; it fits beautifully within the narrative and the ending is one which I don’t think would have been all that unusual at that period.