Blog Tour: Across the Sapphire Sea by Lee Colgin

Across the Sapphire Sea | Lee Colgin

Elias—plucked from indentured servitude at nineteen and turned into a vampire—is caught in a downward spiraling relationship with his possessive sire.

Valeri—a damaged soul who guards his secrets and his fledgling alike—balances on a razor’s edge of good and evil.

In a race to save one of their own from a deadly sickness, Valeri and Elias lead an unlikely team on a dangerous voyage to pry secrets from an ancient group of vampires. But these vampires are hidden for a reason, and they’ve been known to kill trespassers.

The closer the team comes to discovering the truth, the wider the rift between Elias and Valeri grows—until Elias doubts the relationship can be saved.

Will they find a cure in time? Can Elias and Valeri make it to the other side together, or will ancient secrets shatter their bond forever?

Across the Sapphire Sea is an MM Paranormal romance packed with adventure, a steamy love story, and danger at every turn. This is book two of a series and contains its own story and HEA with no cliffhanger, but author recommends reading Beneath the Opal Arc first for the most enjoyment. Novel contains scenes intended for mature readers, full warnings inside.

The stranger rose and stalked forward.

Elias fought a threatening wave of panic, forced himself steady, and cleared his throat. “What’s your name?”

“Elias.” Had he avoided the whip only to be stabbed to death?

But no, Valeri reached high, took Elias’s wrists in one hand, and cut the rope with the other. When his arms tumbled free, he lost his balance and landed with a thump against Valeri’s chest.

“I’ve got you.” Valeri held him with gentle hands. Hands that just slaughtered Elias’s cruel master. In cold blood. In front of witnesses.

Numbness in Elias’s arms gave way to pins and needles, but he found his feet. He made to pull away.

Valeri tightened his hold. “Not yet, you’ll catch a chill.” He unclasped his dark wool cloak and brought it around from his shoulders to Elias’s. He refastened the clasp and smoothed the thick fabric along Elias’s collar bones. “Better.”

“Thank you,” my lord lingered on the tip of his tongue, but Elias didn’t want a new master, so he dared use his proper name instead, “Valeri.”

“You’re welcome.” Valeri raised a brow as if he recognized the bold choice Elias had made. “Elias.” The syllables rolled from his lips slowly. They stared at one another, eyes locked, until Elias gave in and lowered his gaze.

The whip was tucked into Valeri’s belt. So they’d be keeping it, then.

Elias threw a glance over his shoulder. As he suspected, the other bondslaves had stopped their fieldwork and stood gawking at the events transpiring before them. What would they think of a stranger murdering one of their overlords? Did they know Elias was complicit? They couldn’t have heard the exchange, but the whole thing would look suspicious.

“What if we’re caught?” asked Elias, his focus back on Valeri.

“We won’t be.” Confidence dripped from Valeri’s tone like blood from the jowls of a predator.

Elias’s heart thudded in his chest. He wanted to follow. “And go where?”

Valeri gave a casual shrug. “Wherever we want. But for now, to my sanctuary because you’re hungry and should eat.”

Valeri wanted to feed him. Elias wouldn’t say no; it was too late for that anyway. And they couldn’t stay there.

Elias wished he could believe him, but even though it wasn’t true, he’d no urge to argue.

Beneath the Opal Arc

The love story of a witch who saves the world and the vampire who saves him.

As the battle rages around him, Laurence stops to witness a witch casting a powerful magical arc. Werewolves race past, running for cover, but Laurence can’t tear his gaze from the vulnerable spellcaster.

When Remy is injured, he doesn’t expect a vampire to come to his rescue. What is he to Laurence if not dinner? But Laurence carries him to safety, ensures he gets treatment, and protects him from a pack of angry werewolves.

No one knows how long the magical arc will hold. Frightened by what might happen when it falls, Remy needs to escape the frontlines and find a safe haven before his own people hunt him down for treason.

As sparks fly between the unlikely pair, can they find solace in love, or will the supernatural war claim two more victims?

Beneath the Opal Arc is an MM Paranormal Romance packed with adventure, a steamy love story, and danger at every turn. This novel contains violence and scenes intended for mature readers. This is book one of a series, and though some threads are left for book two, there is no cliffhanger. These characters get their HEA with another adventure yet to come!

Lee Colgin has loved vampires since she read Dracula on a hot, sunny beach at 13 years old. She lives in North Carolina with lots of dogs and her husband. No, he’s not a vampire, but she loves him anyway.

Lee likes to workout so she can eat the maximum amount of cookies with her pizza. Ask her how much she can bench press. 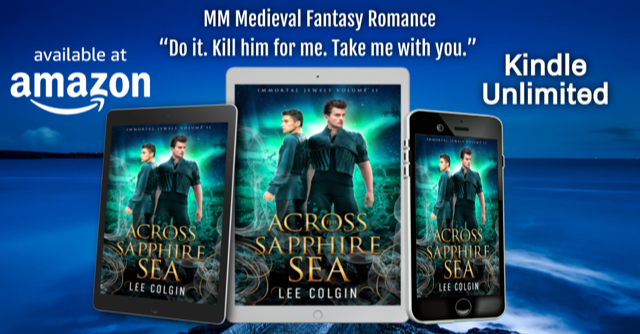 To celebrate the release of Across the Sapphire Sea, Lee is giving readers the chance to win an e-set of Immortal Jewels Series so far (2 ebooks)