Pursuing his dream, Sawyer heads to LA for some sun, waves and surfing lessons. After a disappointing day of surfing, he heads back to his campsite and meets Alex, his Fated Mate, who runs away, valuing his freedom more than anything else.

After the death of his wealthy, domineering father, Alex is can finally shed a lifetime of restrictions. Leaving New York City, he sets out on a long, cross-country RV trip, unaware that an overnight stop in a Los Angeles campground will yield not one Fated Mate, but two! Shocked at meeting Sawyer, Alex rejects him, vowing never to be under the thumb of any Alpha mate.

Glenn, a career secret agent, is also in LA to seek help from his friend, Ghost, a surfing instructor, in his quest to find who is responsible for kidnapping Glenn’s mother and other rare shifters. After meeting up with Ghost, Glenn discovers his Fated Mate is Sawyer, his friend’s current surfing student.

After the three mates finally meet, each has to face up to some hard facts about their past and present lives before coming to an understanding that leads them to find love and happiness with each other.

Astounding surprises, rare and unique gifts, an action-packed mission, and many unexpected twists and turns make this passionate love story by Mary Rundle impossible to put down once you’ve read the first page.

Rolling over, Alex stretched, groaning as a sliver of early morning light hit his eye. Quickly covering his face with a pillow, he lay there for a while, dozing on and off until finally the memories from last night filled his mind. Oh shit! He needed to get going if he was going to escape the control of a mate. Sitting up quickly, he glanced at the time, biting his lower lip when he saw it was after eight in the morning. Moving the curtain aside a hair, he peered out, sighing in relief when he saw no one outside. Thank goodness for that, at least. Scooting out of bed, he headed to the small bathroom to get ready to meet the day.

After a shower, he dressed quickly and then, after securing everything inside the trailer, grabbed a protein bar and a bottle of juice for breakfast. Sitting down at the table, he studied the map of Southern California. There were only two other gay campgrounds, neither of which were close to the one he was presently at. That meant a day of travel. Something Alex wasn’t very happy about, but it was a far better alternative than finding himself again under someone’s thumb.

Taking another bite, he chewed slowly while considering the two options, head south to Palm Springs or north to San Francisco. According to his research, both were meccas for men like him and both were on his list to visit. His goal was to pick the one he liked most, then buy a house, somewhere he’d be free from the restrictions others had always imposed on him for as long as he could remember.

If there were any doubts about taking off on his cross-country trip, they were gone as Alex began to experience what he’d been robbed of in his youth. Vowing to never fall under another person’s control again, he was quite prepared to live the rest of his life alone, finding pleasure in random hook-ups instead of being crunched under the boot of a mate. Even though he’d heard talk at school about the pleasures guaranteed by finding a fated mate, Alex knew the price was too high, at least for him. His only regret—and it wasn’t a deal breaker—was that his choice would mean accepting a lifetime of loneliness.

Finishing his breakfast, he decided to head south, keeping to his original plan to check out Palm Springs first. Folding up his map, Alex stuffed it back into the folder before gathering up some water and snacks to take with him in the SUV. Glancing around the trailer once more to make sure everything was secured, he opened the door. Lifting his gaze, Alex stopped mid-step as his eyes landed on the one person he was hoping to avoid.

Standing naked at the edge of the clearing after shifting, Sawyer stared at the slim man whose face he would never forget. His mate was even more beautiful in the daylight. When he saw Alex’s tongue tentatively licking his lower lip, his body flamed with desire, his now-hardened cock quivering against Sawyer’s stomach, demanding to be sheathed in his mate’s body. Never, in all the time he sought pleasure with strangers, did he ever feel the overpowering need to be one with another as he did now. There wasn’t any way he could deny what his body was telling him. Taking a step forward, Sawyer reached out his hand, wanting to touch his mate’s body…to bury his nose against his mate’s neck…to imprint his mate’s scent in his heart…to mark the man as his.

All of Alex’s plans to flee flew out of his mind as he gazed at the gorgeous, naked man in front of him. Shivers ran up his spine, his cock hardened, his legs trembled. Intense desire ran through his body, overtaking his mind until all he could think of was that man taking him, easing his need, filling him up with cum. Nothing else mattered now…his preparations to leave were replaced by images of him surrendering as the man’s cock entered his body, making Alex his mate. His jeans were too tight, the flannel shirt was suddenly too hot, the urge to tear off his clothes had his fingers reaching for a button but when the man moved towards him it was as if someone had dumped a bucket of ice cold water over his body allowing him to remember his vow to remain free. Panicking now, he held up his hands. “No…don’t come closer. I don’t want you. Leave me alone!” Turning around, he retreated back into the trailer, slamming the door behind him.

The first book I ever wrote was Dire Warning in 2017 and, much to my delight, it became an Amazon Best-Seller. Readers loved it and I was on my way to chronicling the Blackwood Pack, seven brothers who are gay wolf shifters in search of their fated mates—stories about love at first sight with twists and turns, angst and humor, romance and adventure and, of course, happy endings.

As my books began to be translated into other languages, I also became an Amazon International Best-Selling author and then achieved the honor of becoming an Amazon All Star due to their popularity. My tenth book, Darkness Master has just been published and audible versions of the entire series are in progress.

I love the M/M paranormal genre because it gives my imagination a lot of territory in which to roam. My mind can really run wild and come up with some amazing stuff when it doesn’t have to stay inside the box.

My readers tell me they feel like they’re members of the pack as the stories unfold…as if they’re right there in the middle of the action. Others tell me it’s like watching a fast-paced movie. My writing style pulls no punches…readers love it and are always clamoring for the next book.

Stories come to me as if channeled by my characters, all of whom I love (except for a few villains). They are eager to recount their lives, loves and adventures and are not inhibited when it comes to revealing steamy, sexy details.

I currently live in the Northeast and love the beautiful change of seasons, my husband, and our quirky calico cat, though not necessarily in that order. I’m always happy to hear from my readers and can be reached through Facebook, Twitter, Instagram, email, or my website.

Mary is giving away a $20 Amazon gift card and a Blackwood Pack mug to one lucky winner: 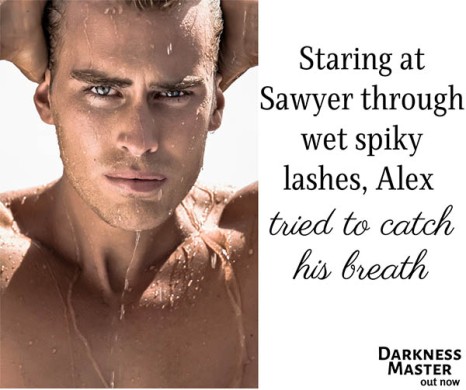