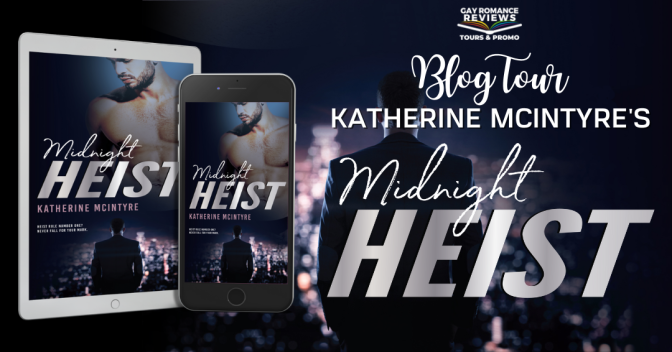 Grif’s always followed the one rule in the high stakes business of heists: never fall for your mark. At least until he meets Danilo Torres…

Grif Blackmore’s team of thieves, the Outlaws, take down wicked corporations and nab fantastic paydays. However, when their latest heist fails, they end up in debt to the mafia, which puts the pressure on for their next job targeting Torres Industries to go off without a hitch.

There’s one problem. The CEO of Torres Industries, Danilo Torres, happens to not only be dead sexy but unaware of his company’s corruption. When the sparks flare between Grif and Danilo, Grif can’t help but fall for his mark.

Grif is left with a decision to make. Is he willing to throw it all away for the man who’s caught his interest, or is there a chance to play Robin Hood without losing it all?

Grif Blackmore never did a job on a Tuesday.

The other Outlaws might call him a superstitious fuck, but he didn’t give a damn. If he didn’t have a code to live by, he wouldn’t have much more than a vinegar attitude and too many scars to carry into the next life. Still, said code also meant he got saddled with research duty for their current job, trapped behind their luxury condo’s wall of glass overlooking Lower West Side of big, beautiful, and rotting-from-within Chicago.

Static buzzed from the speaker at the main computer rig connected to the group comm in their family room opposite the foyer. Their console sat on the lacquer desk overlooking their spectacular view, a metallic beast Scarlet had assembled when they first set up shop here. Grif might not be on the job, but the others worked out in the field today. He perched in the leather seat. Until each member of his crew had walked in through the door, he wouldn’t be able to settle. He tapped his foot to the melody in his head, the cycle of different tempos in constant flux.

His fingers flew across the keyboard as he dug in for more information on Torres Industries. The energy and commodities company was one of the businesses in the Aon Center, a skyscraper tall enough to loom over half of Chicago. After the insider tip he got last week on some of their seedier activities, they’d warranted a look. He knew at least a dozen people who would pay quality cash for the information to torpedo the corporation.

If a company was rich and corrupt, Grif Blackmore would destroy them. Most times, the two went hand in hand anyway. He’d sworn the oath years ago and still upheld it today.

The CEO’s image popped up on the screen. Danilo Torres, a guy who looked far too young and attractive to be in charge of such a wide-scale operation. Slender eyebrows and a wide smile accented the soft curves of his face, and he must’ve inherited the bronzed Filipino skin tone and thick, dark hair from his father, the former head of the company. He’d taken over a mere year ago when Torres Sr. went into retirement. A few more years in the industry, and the big open smile would vanish, replaced by the slick fake sort that circulated around the upper echelons of the big corporations.

Grif had mastered his own game face far earlier than necessary.

He lit his cigarette, taking in a deep drag, and continued to run through the list of the top dogs in the company, most of whom neared retirement age. The nicotine did little to calm him, but he let out the slow exhale anyway. The smoke drifted to the vaulted ceiling. John would be pissed at him for smoking inside again, but he could pin the blame on Tucker. Each one of the Outlaws took their turn sitting out on jobs, but Grif never made a good benchwarmer.

If Luka told him this was a solid lead, he believed the man. Few had earned his trust, a fluid thing, but his top informant maintained a reliability rare in their realm of cutthroats and sellouts. Besides, the man ran a solid joint—Port and Porter was one of the few bastions for his kind that hadn’t been outed by the cops at some point. He sucked in another drag and leaned forward to ash into the nearest coffee cup littering the desk. Grif peered inside. Crap, he’d sprinkled ash in a half-filled mug.

Katherine McIntyre is a feisty chick with a big attitude despite her short stature. She writes stories featuring snarky women, ragtag crews, and men with bad attitudes—high chance for a passionate speech thrown into the mix.

As an eternal geek and tomboy who’s always stepped to her own beat, she’s made it her mission to write stories that represent the broad spectrum of people out there, from different cultures and races to all varieties of men and women. Easily distracted by cats and sugar. 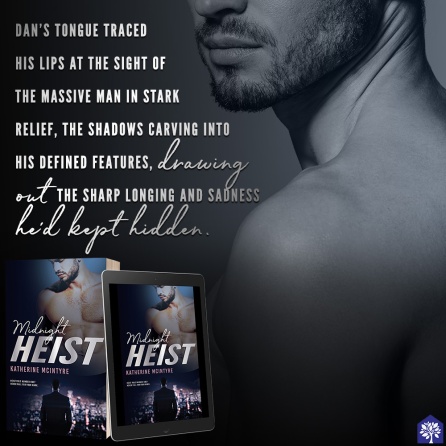 To celebrate the release of Midnight Heist, Katherine is giving away a $10 Amazon Gift Card to one lucky winner