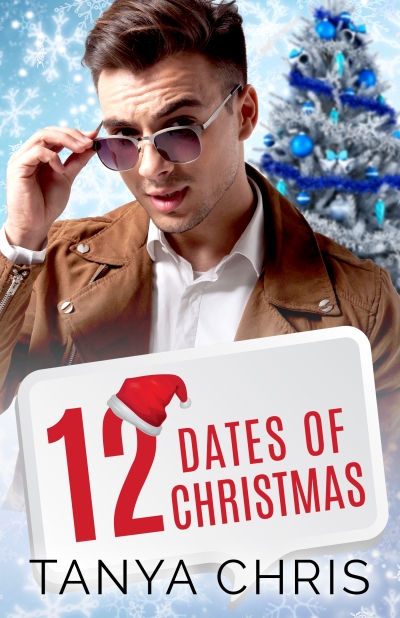 Orion has devised a brilliant strategy for achieving internet fame—an Instagram campaign where he goes on twelve dates over twelve days, culminating in a made-for-TV happy-ever-after with fellow influencer and hot Brazilian model Afonso. Their pre-arranged fake relationship is bound to capture hearts and dollars, skyrocketing Orion from mid-tier to top-tier. His plan couldn’t be more perfect.

And then he meets Gustav. Gustav isn’t famous or devilishly dark and handsome. He’s not even on Insta. And he has an annoying habit of calling Orion out on his dubious ethics.

Now Orion is torn between fake fame and true happiness as he tries to continue his campaign while dating Gustav on the sly. The world thinks it knows a lot about Orion, but none of what it knows is true, and as Christmas comes to a close, Orion is wishing he could start the new year in a whole new way.

This 20,000 word Christmas novella takes place in a non-COVID timeline.

Gustav’s benevolent bulk and obvious interest were making Orion realize there were aspects of this fake boyfriend business he hadn’t given sufficient consideration to. Namely, how he was going to get laid. He and Afonso looked great on paper, but they were going to be duds in real life. They were both bottoms, for one thing, and both attention whores, for another. Attention whore wasn’t the nicest label Orion could stick on himself, but it was the most accurate.

On top of that, Afonso came across as emotional, finicky, and high-strung, none of which were characteristics Orion appreciated in a partner. He wanted someone like this guy—the blond hulk standing steadily in a swaying train car looking at him with eager eyes. But if Orion was “dating” Afonso, he wouldn’t be free to date anyone else. Even hookups would be dangerous because if he got exposed as either a liar or a cheater, this campaign that was supposed to make his career would be the end of it instead. He was going to have to keep his dick in his pants for the next six months.

“Maybe you’d join me and my friends when you’re finished looking at the tree?” Gustav suggested. “Or I could look at the tree with you.”

“No! I mean, thanks. For the offer. Only—” Shit. He didn’t like seeing the enthusiasm wash out of Gustav’s eyes. The two of them had been making a real connection. Why did fate have to be such a bitch? Yesterday, Orion hadn’t had even a tingle of interest in anyone, and now he had to meet someone on the first day of his self-enforced celibacy? It wasn’t fair. But he’d put too much work into this campaign to bag it for a stranger on a train, as handsome and friendly as that stranger might be.

“I’m meeting someone,” he told Gustav, giving up on putting it any other way.

“Oh. Well. Good for you.” Gustav’s smile was a hollow echo of his earlier one. “Like you said, Christmas is about connection. I hope it works out for you.”

Orion considered backpedaling. He could say it was only a friend he was meeting, get Gustav’s phone number, track him down later. But he didn’t. He’d been planning this for months. Months.

The subway jerked to a halt and the doors slid open. People poured on and off. Gustav headed for the exit with a mumbled This is my stop that Orion could tell was a lie. He felt like the prince watching Cinderella escape. He should at least have a glass slipper to remember Gustav by, but what would be the point? This Cinderfella wasn’t his to catch.

The doors slid shut, the woman Orion had given his seat to rearranged her bags, and the train moved on.

Tanya is an avid rock climber, a long-distance runner, and a participant in her local community theater where she has tackled most roles, including playwright, actor, director, producer, and stage manager. Her travels, both for climbing trips and for cultural exploration, have brought her to places as fascinating as Egypt and as beautiful as the Dolomites, though there’s no place like home.