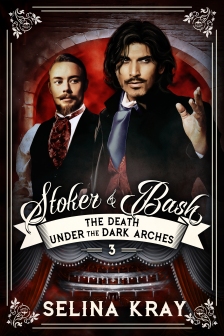 The Death Under the Dark Arches by Selina Kray

Starts with a bang and the thrills never stop!

Definitely my favourite in the series. This investigation has all the best bits out of the three so far – from its Phantom of the Opera inspired plot line, to the seedy underbelly of Victorian London, to S&B cementing their relationship.

The Prologue isn’t a Prologue as such, it’s a sneak peek further into the book, which usually drives me nuts when it’s a contemporary romance, as it gives away an element of the relationship.

However, here it’s used as a very clever “flash forward” to a pivotal moment in the narrative which acts more as a trompe l’oeil for the brain than the eyes, as all is not what it seems.

The actual plot is inspired by the best gothic melodrama, taking its cues from the mysterious theatre ghost and a devious enemy who not only hides in the shadows, but taunts at our erstwhile heroes in the hopes of luring Hiero’s alter ego back to the stage.

This one’s also quite violent and a fair bit gruesome, so bear that in mind as you set off reading, it’s a no holds barred exploration of the lengths someone insane would go to for revenge.

I absolutely LOVED it and couldn’t put it down from the moment I started reading until I finished it approaching midnight.

The usual crew are all out in force too and my heart broke a wee bit for one of them, no spoilers being revealed here, but it also rejoiced because Kip and Hiero are stronger than ever and this one’s just as steamy as the previous two!

Their bond is tested though, not only because of the nature of the case, but because of their disparate personalities and a sense of dread hangs over the whole investigation.

It all comes to a hugely dramatic final 25% which, in the best mystery/suspense tradition, has action galore as well as revelation after revelation, twisty plot turns and gasps of shock as the gang becomes embroiled in a fight for their lives under the Adelphi Arches, a cesspit of depravity near the banks of the Thames.

So, hopefully enough excitement for you to pick up this most brilliant series, without me spoiling any of the skilfully woven elements of surprise which Selina is so absolutely perfect at.

This series is right up there for me as among the best detective/melodramatic homages, and I cannot wait for book four because I bet there’s going to be tears before bedtime for me with that one!

And, as ever, the cover by the wonderful Tiferet Designs, is fabulous and, as I noticed, Kip now appears more flame haired than on the last two 😉

If I had a slight nitpick, and it’s totally me being pedantic, I wish the spellings for this London-set book had followed English not American, we have Us in our Colour and we drink Whisky not Whiskey (unless it’s Irish) but that’s a minor point and it never really spoils the book.