A childhood in foster care taught Carey Everett to hold tight to what he has. Enlisting in the Marines gave him purpose, but a life-threatening injury ended his career—and took his leg. Now fully recovered, Carey’s happier than he’s ever been. He has a fulfilling job, a chosen family and, best of all, a cherished friendship with Jase DeSantis, the platoon medic who saved his life.

Jase knows how to take care of the people he loves. As the oldest of seven, and then a Navy corpsman, it’s what he was born to do. Still, he’s haunted by his actions overseas. Playing music with his band keeps the demons at bay, but it’s a battle he’s starting to lose.

After a week of sun and fun in San Diego, Jase and Carey’s connection takes an unexpected turn. With change comes a new set of challenges. For Jase, it means letting someone else into his deepest pain. For Carey, it’s realizing love doesn’t always equal loss.

In order to make their relationship work, they’ll each have to come to terms with their pasts…

…or risk walking away from each other for good.

Previously published, this book has been rewritten with a new cover and blurb. 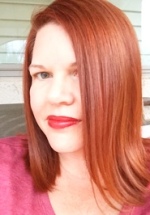 Melanie Hansen has spent time in Texas and Florida prisons…for work. She’s been in a room with a 17-year-old mass murderer who was also one of the most soft-spoken and polite teenagers she’s ever met. After a 13-year career as a court reporter, she can tell many stories both hilarious and heartbreaking.

She grew up with an Air Force dad, and ended up marrying a Navy man. After living and working all over the country, she hopes to bring these rich and varied life experiences to her stories about people finding love amidst real-life struggles.

Melanie left the stressful world of the courtroom behind and now enjoys a rewarding career transcribing for a deaf student. She currently lives in Arizona with her husband and two sons.