Blog Tour: In His Court By Max Rowan

In His Court | Max Rowan

A spy prince needs a man who sees through his disguise.

Prince Benedict is not what he seems. His image as a lazy playboy is carefully constructed to hide the truth. Trained since childhood to become Rosavia’s top spy, he spends his life in disguise—and danger—to protect his country. Nobody sees the loneliness in his heart.

Felix Wright is a genius with four degrees, no real-world experience, and a top-secret job… and he’s never even been kissed. A lifetime of being alienated for his most valuable assets has left him reluctant to trust the charming prince who thrusts him into fieldwork for the very first time.

When the Crown Jewels are stolen two weeks before the royal ball, it’s their job to save the country’s reputation. Benedict helps Felix believe in himself, while Felix slowly coaxes the real prince out of hiding.

But can they find the jewels and rescue the most priceless treasures of all: each other?

Exclusive from Max & the Inspirations behind her Prince

How did you become a part of this project/world?
I was part of the creation of Men of Hidden Creek, so when I was approached about starting a new shared universe about a small European country, the offer coincided with my availability, and so I leaped at the chance.

Where did your story’s inspiration come from?
I took a lot of my inspiration from the cover. He looks very serious, doesn’t he? I wanted to build on why such a young prince looks like he’s carrying the weight of the world on his shoulders, and since I like to write what I know – intelligence agencies – the fact that this prince was actually one of Rosavia’s top spies just clicked into place.

Of course, as we all know, an agent is nothing without his tools, and so creating his equal and yet very opposite seemed so obvious to me. And so grew the story of a highly trained secret agent and the prodigal genius who designs and makes those tools for him, and the way they butt heads when they’re forced to work together.

I think this is the best book I’ve written so far. Benedict and Felix are special to me. I hope they will be to you, too.

How did you create your Prince?
Benedict very much came to life for me when I sat down to write the prologue. By then I had worked out his past, how he came to be a spy while also being a high-profile member of the royal family. I’d researched European royal families and their ties to their countries’ militaries, so making Benedict secretly a spy while the whole country believed he was actually part of Rosavia’s army made sense to me.

But his personality – what that enormous responsibility and the intensive training had done to make him the young man he is today – really settled in when I began to write. All the little details came together to build this intensely competent agent whose life is kept secret even from his own brothers, and the sense of duty and yet aching loneliness that created in him shone right from the start. 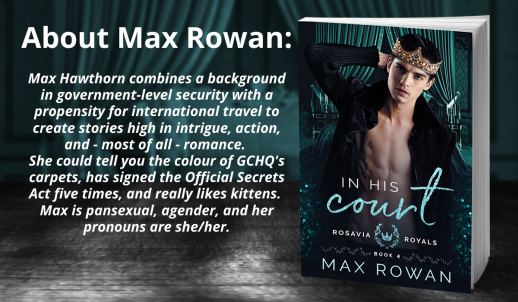 Max Rowan (formerly Hawthorne) combines a background in government-level security with a propensity for international travel to create stories high in intrigue, action, and – most of all – romance.

She could tell you the colour of GCHQ’s carpets, has signed the Official Secrets Act five times, and really likes kittens. Max is pansexual, agender, and her pronouns are she/her.

Welcome to the tiny European country of Rosavia, where roses ramble over alpine slopes and princes fall for the men of their dreams.

Every Rosavia Royals book happens simultaneously, so books can be read on their own, or in any order… but keep an eye out for familiar faces around the palace!

Come join the fun on the Royals Facebook Group:

Add them on Goodreads