Release Blitz: When I First Saw Red by Kasia Bacon 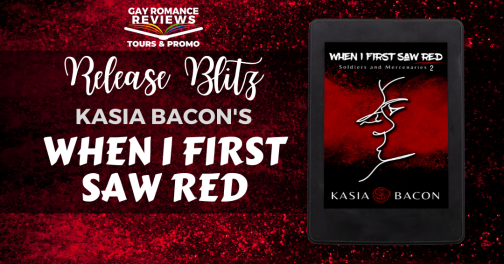 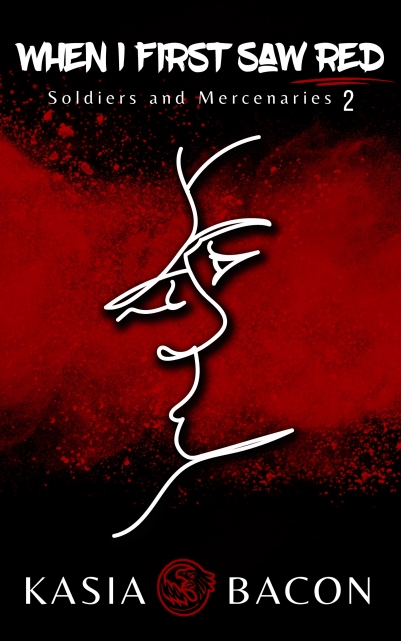 Lázhien’s human. A common Imperial soldier. And my soulmate. How could fate get it so wrong? The demon in me craves this bond with every shred of his being. He pushes me to accept it. This time I won’t yield to his demands.

Red’s a lust demon, a whore and a stuck-up snob.The most beautiful man I’ve ever seen. Pain in the arse. And he hates my guts.I’d be an idiot to pursue him. Yet something about him compels me to make him mine.

When I First Saw Red is a complete and standalone short novel with an HEA ending, featuring a couple of reluctant fated soulmates—a demon and a human—trying and failing to defy destiny.

A raucous ripple of laughter rang out from the wooden gallery above us, where the more pricey whores kept lodging and conducted their business. Following the source of the commotion, I looked up.

Two men and a woman had just come out of a room on the mezzanine floor. Judging by the way the joke had them all in stitches, it must’ve been top-notch.

The highborn couple, dressed in layers of greys and silvers as the latest fashion dictated, stood in contrast with the shirtless and barefoot whore. He sported only a pair of low-slung, undone breeches, offering the world a generous glimpse of his hips and groin.

I couldn’t make out their words, but I recognised that the merry gathering held a conversation in Common Elven. It didn’t surprise me. For one, it had been the language of the nobles and courtiers since the Emperor had taken the throne thirty-odd years before.

Secondly, the whore was a half-breed Elf.

A closer glance at him and my mouth went dry.

My shaft hardened as I drank in the sight of him— his lean figure, luminous skin and angular eyes. The pointy tips of his ears poked through a cascade of red hair. Not copper, ginger or auburn. Not mahogany. But blood red. Intricate tattoos on the sides of his face announced his Incubus heritage. Obsolete Imperial law still called for the marking of Tii-Matâshi, even though their Magic had declined through the centuries, shrinking their power to a fraction of that possessed by their demonic forefathers.

The redhead’s companions waved their farewells and made for the stairs. He leant over the railing in a nonchalant pose, his sculptured arms folded on top of the barrier. There was a note of arrogance in the way he examined the crowd below and shamelessly displayed his ethereal beauty.

It took a moment, but eventually his gaze fell upon me. At first, he seemed to stare through me. Then he measured me up, blatant and hostile somehow, as though ascertaining my worth, leering at me in a downright insolent manner.

I couldn’t look away, turned-on and irate at the same time. Insane as it might have been, I felt the physical touch of fingers running over my body. The sensation set my flesh on fire.

Perhaps the stories told about the Tii-Matâshi held a grain of truth.

Next thing I knew, his mouth set into a condescending smirk. He averted his eyes and pivoted on his heel. Before he disappeared, I observed his lush hair swish to the side and cover his shoulders and back like a fiery silk cloak.

The slam of his door felt very much like a slap to my face. I flinched. 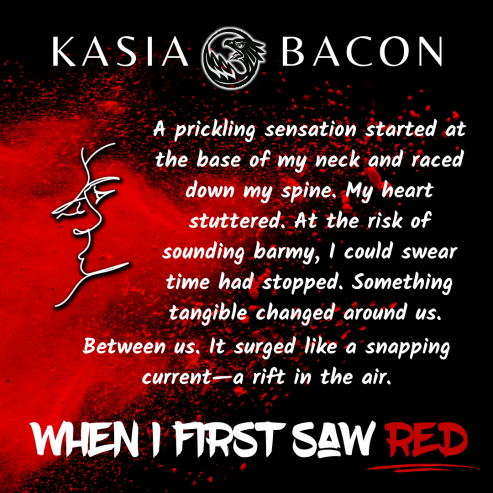 A linguist and an avid reader with a particular fondness for fantasy and paranormal genres, KASIA BACON lives in London with her husband. When not tearing her hair out over a translating project, she writes stories about the shenanigans of emotionally constipated assassins and sexy Elves.

Otherwise, she can be found shaking her loins at a Zumba class, binging on anime or admiring throwing knives on Pinterest. A lover of MMA and Muay Thai, she also enjoys nature and the great outdoors.

She dreams of becoming independently wealthy, leaving the city and moving into her wooden mini-manor—located in the heart of stunning forests resembling those of the Elven Country depicted in her tales.

To celebrate the release of When I First Saw Red, we are giving 3 lucky winners back-listed eBooks from Kasia Bacon published works.

Enter the Rafflecopter giveaway for your chance to win! 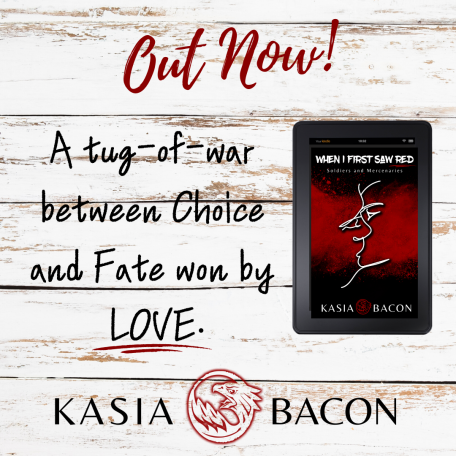