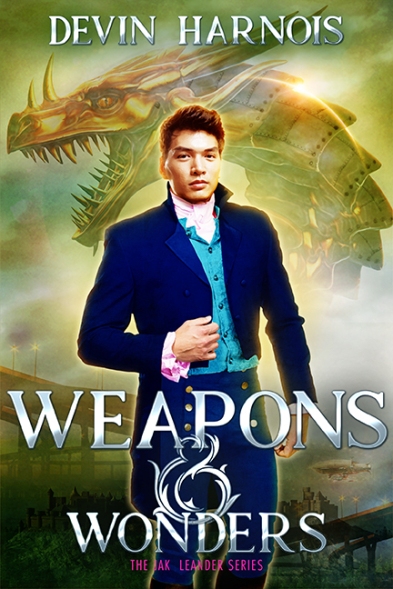 Working on a military contract isn’t what Jak wanted, but he tries to look on the bright side. Enchanting several mechanical dragons is an exciting prospect, and more importantly, the project allows him to stay close to Leander.

They’re even living together, but making excuses for it to Leander’s family and everyone else. Jak knows society is unaccepting, but he’s growing increasingly frustrated at the need to hide their relationship.

Leander still can’t believe flirty, popular Jak chose him. Their romantic partnership is unlike anything he’s experienced before, and a small part of Leander is worried Jak will grow tired of him.

When plans for the newest dragon go missing, suspicion falls on Jak, and Leander is terrified his lover will be taken from him. Then sabotage strikes the project, and it becomes clear a spy is in their midst.

Far worse things are on the horizon, and this time Jak can’t run away. To keep Leander and his family safe, Jak is forced to make a terrible choice.

“I believe you mentioned something about breaking in my new bed?”

Jak smiled, and there was heat in his gaze. “Lead the way.”

After first making sure his bedroom door was locked, Leander pulled Jak close again. Between kisses and caresses, they slowly removed their clothes. Either Jak was in the same tender mood, or he was content to follow Leander’s lead. Leander pressed him back onto the bed, and Jak stayed nearly still while Leander explored his skin with lips and fingers.

“Gods, Lee, that feels good.” Jak moaned as Leander kissed his way down Jak’s chest. He squirmed a bit and occasionally arched, but Jak made no move to take control. His fingers slid through Leander’s hair, caressed along his shoulders and back. There was nothing hurried in his touches, and yet there was something… needy about them. Perhaps Jak felt the same urge to be close, to be skin to skin with the man he adored.

Leander moved up to take Jak’s lips in a slow, deep kiss. “I was so afraid,” he whispered. “Don’t leave me like that again.”

Then he sighed and shook his head, leaning back just enough to see Jak’s face in the dimmed gas lamps. “I know it’s not your fault—”

“Shh…” Jak caressed his face. Jak was often playful and passionate in bed, but Leander had seen glimpses of this too—a tenderness that made Leander’s heart melt as surely as metal in a furnace. “I won’t leave you.” Jak pulled him down for a kiss.

Although Leander knew Jak had no choice in whether TAD decided to charge him with the theft, the words were somehow still comforting.

Leander resumed his exploration of Jak’s body, seeking out all his sensitive places, delighting in his lover’s gasps and sighs. “Am I driving you mad?” Leander asked before sliding his tongue over Jak’s nipple.

“Yes. But I like it.” Jak’s hands roamed over Leander’s body. “Take what you want, Lee.”

Such a simple thing, permission to put his own desires first. Jak had never left him wanting, had often encouraged Leander to voice his wants, yet it was still a novelty to have it so explicitly stated. To know that Jak would enjoy whatever Leander wanted to do. 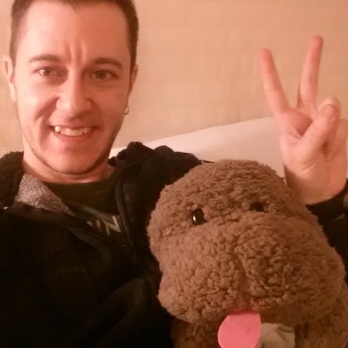 Devin Harnois writes YA and Romance of the fantastical sort. Most of his books involve magic, monsters, and hope. Somehow they keep getting more queer. When he isn’t writing he spends too much time on Twitter and plays a lot of Dragon Age.

In second grade he wrote his first story, a romance about two mice falling in love. He still has the original draft.