A cycle of ritual murders. A coven of dark warlocks, drawing their immortality from the magic of their dead master. Two men sworn to stop the deaths, destroy the warlocks and avenge the victims. Except this time, the killer is hunting the hunters.

Seth Tanner swore vengeance on the dark witches who killed his brother, Jesse. He rescued Evan Malone from one of the witches, and they’ve fallen in love despite the danger and chaos, going on the road to complete the quest and bring an end to the ritual murders. Their relationship is still new, tested at every turn by danger and magic.

Seth and Evan head to Charleston to stop the next warlock and save his intended victim. But this time, they’re too late. The warlock has already powered up, and he’s determined to destroy the two hunters one way or another. A deadly curse on Seth and Evan means time is running out. Can they find a way to turn the tables, or is Charleston their final destination?

It is part of a series but can be read as a standalone and features an evolving, established romantic relationship with all the feels. Intended for readers 18 years of age and older. 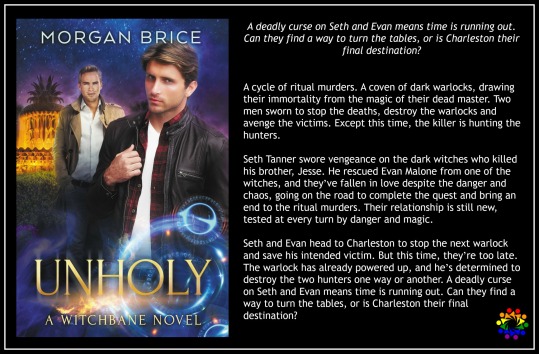 “I’m kind of surprised that the witch-disciple’s gotten away with things as long as he has, if Simon’s right about his cousin being some kind of badass supernatural vigilante,” Seth mused after they had driven several miles. “I would have thought she and her friends would have cleaned house.”

“Like you said, Charleston’s a haunted hotspot,” Evan replied. “That might take a while to clear out all the bad actors.”

“I hope we’re right about being ahead of the curve this time,” Seth said. “We know the witch-disciple is calling himself Michael Longstreet. We know he’s going after Blake Miller. And if Simon’s right about Cassidy and her friends, maybe we can take Longstreet down without nearly getting killed ourselves.”

“Working with Travis and Brent in Pittsburgh certainly helped,” Evan replied. “And I’m not sure what we would have done without Milo and Toby in Boone. Which makes it all the more amazing that you took out the first one all by yourself.”

“Both of us almost died.”

“But we didn’t.” Although Evan had to admit, silently, that it had been a near thing.

“We still don’t know where Longstreet’s anchor is, or what he uses for an amulet,” Seth pointed out.

Evan’s phone rang, and a glance told him it was Simon Kincaide. “Hey, Simon. What’s up?”

“Where are you? Is Seth with you?” Simon’s voice had an urgent edge to it. That sobered Evan immediately.

“We’re in the truck, driving to Charleston. Is there a problem?”

“I had a vision. A warning.” Simon’s abilities as a psychic medium were the real deal. “You and Seth are both in danger.”

“Not to be a smartass, but we kinda knew that,” Seth replied. “Seeing as how we’re going after another witch.”

“I think it’s more immediate. I saw broken glass and blood…a flash of something pink…and something about a UFO.”

“I know how it sounds. I wish visions were more complete. But this was strong enough that it almost knocked me off my feet. That usually means whatever I saw is going to happen soon.”

Evan opened his mouth to say something, just as Seth gripped the wheel with both hands, and the truck swerved. A pink delivery van careened across the median strip, heading straight for them.

“What’s going on?” Simon shouted over the phone.

Hitched to the RV, the truck couldn’t maneuver. The van crashed into the driver’s front corner, twisting metal and shattering glass, drowning out Seth’s cursing and Evan’s cry of alarm as the airbags deployed with a bang like a gunshot. 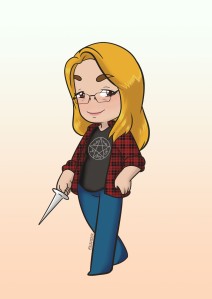 Series include Witchbane, Badlands, and Treasure Trail. Watch for more in these series, plus new series coming soon! 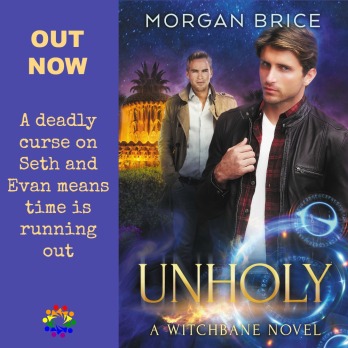