Nick Andrews has returned to the Caribbean—but the world he remembers has changed for the worse. Despite the dangers, he needs to find a way to get to Corona. All he can think of is to reunite there with the love of his life.

Meanwhile, Tom is watching his every move. Tom, who has turned cold and demanding, and is desperate for Nick to love him.

One night things get out of hand, and something happens between them. Something unforgivable.

Tom is sullen and quiet as he gets ready for bed. His chamber is at the corner of the house, three times as spacious as Nick’s room next door, and far away from O’Connell, whose quarters are next to the kitchen and dining hall. There’s fresh water by the washstand, clean bed linens, and a mirror on the wall—but Tom complains about the mosquitoes, the humidity, and the house’s size.

“Just one floor, like a house for poor people… and nothing is beautiful here, nothing! How am I supposed to live like this?” He lies down in bed, curling up before giving Nick a hard look. “But you think it’s all fine, don’t you?”

“No.” From what he’s seen so far, Harrow Hall is not a good place. That whip in Buckley’s hand… “Why would I think that?”

Nick goes into his own chamber. His body is sore, exhausted, but once he’s in bed he finds it hard to sleep. From the other part of the house comes the sound of voices, laughter. O’Connell and his men sampling their own rum, probably.

There is nothing to like about this place, but Nick won’t stay long. He’ll take the first opportunity to leave.

An Interview With Elvira Bell

When did you write your first story and what was the inspiration for it?
The first story I wrote that was more than a few pages long was about a farmer’s wife in the middle of the 19th century. I was always a history nerd and had a lot of inspiration for my earliest stories from books about the immigration from Sweden to the United States.

Do you have a writing schedule or do you just write when you can find the time?
I try to write every day, but it depends on what I’m working on and what is going on in my life otherwise. When I write the first draft of a novel, I tend to work very hard and finish in a short amount of time, rather than write some words here and there.

Briefly describe the writing process. Do you create an outline first? Do you seek out inspirational pictures, videos or music? Do you just let the words flow and then go back and try and make some sense out it?
I tend to do a pretty extensive outline, unless I’m working on a short story or something that doesn’t have a very complicated plot. I often have to do several outlines, each one more detailed than the last, until I’m at a point where I feel ready to start writing. If I’m working on a novel, I also fill in character sheets for all the characters before I get to writing.

Where did the desire to write LGBT romance come from?
I discovered LGBT romance mainly through the British show Queer as Folk, which I started watching when I was 13. My writing was affected gradually—I hinted at minor characters being bisexual or gay in my otherwise straight romantic stories, and then when I was 14-15 I found fan fiction and started writing male/male romance.

How much research do you do when writing a story and what are the best sources you’ve found for giving an authentic voice to your characters?
It depends a lot on the story, but I usually do a lot of research since I mainly write historical novels. It’s not my favorite part of writing, since I’m always eager to get on with the story, but it’s fun and always makes me learn a lot.

What’s harder, naming your characters, creating the title for your book or the cover design process?
I think creating book titles is certainly the most difficult part. I love naming characters, and I can take forever to come up with the perfect name, and the cover design process hasn’t been very hard at all for me since I’ve worked with such skilled and professional people. But book titles… It really isn’t easy.

“How do you answer the question “Oh, you’re an author…what do you write?”
That really depends on who’s asking! I don’t like to talk a lot about my writing with co-workers, for example, but it’s different when it’s someone who’s familiar with the genre or who’s into nerdy things in general. I can be more honest then.

What does your family think of your writing?
They are proud and supportive.

Tell us about your current work in process and what you’ve got planned for the future.
My current WIP is a fantasy story. In the future, I’d love to write about Vikings!

Do you have any advice for all the aspiring writers out there?
All writers give the same advice, don’t they, but that’s because it’s true—READ. Read a lot, write a lot. Find out who your favorite authors are, and why, and what you can learn from them. Find your own style.

If you could travel forward or backward in time, where would you go and why?
I’d go back in time and see the seven wonders of the Ancient World. ❤

We’ve all got a little voyeurism in us right? If you could be a fly on the wall during an intimate encounter between two characters, not your own, who would they be?
Aragorn and Legolas? Because some pairings are too good to ever get old (and not only because one of them is an elf).

If I were snooping around your kitchen and looked in your refrigerator right now, what would I find?
Olives, pickles, peanut butter… anything in a jar, really.

If you could trade places with one of your characters, who would it be and why?
Since I’m the kind of person who can’t stand traveling (and isn’t fond of tropical heat or insects), I guess I’d just trade with one of the villagers Nick left behind when he went to sea. A calm and simple life!

If you could sequester yourself for a week somewhere and just focus on your writing, where would you go and what would the environment be like?
Well, since I don’t enjoy traveling I wouldn’t go far—only to some quiet little cottage in the countryside, with the woods nearby.

What internet site do you surf to the most?
Tumblr or various news sites.

When you got your very first manuscript acceptance letter, what was your initial reaction and who was the first person you told?
I was very shocked, very excited, and rushed through the apartment at once to tell my boyfriend. 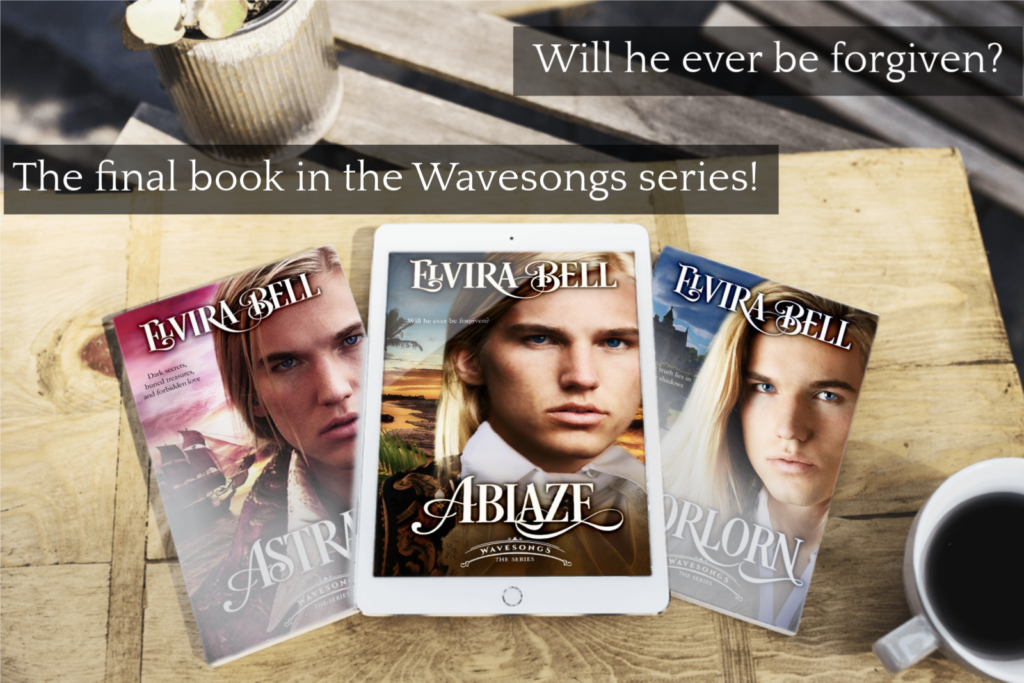 Elvira Bell lives in Sweden and spends most of her time writing, reading or watching movies.

Her weaknesses include, but are not limited to: vintage jazz, musicals, kittens, oversized tea cups, men in suits, the 18th century, and anything sparkly.

Elvira writes MM fiction with a touch of romance and has a penchant for historical settings. She adores all things gothic and will put her characters through hell from time to time because she just loves watching them suffer.

It makes the happy endings so much sweeter, after all.

unflinching advice from sex on the edge / by Alexander Cheves