Release Blitz: Whatever it Takes by Barbara Elsborg

Whatever it Takes | Barbara Elsborg 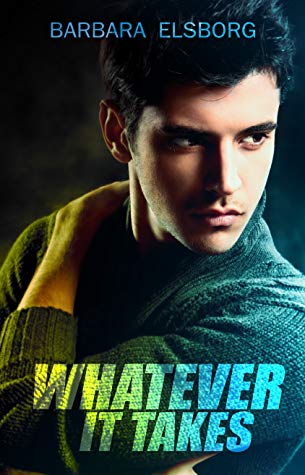 War in Syria has devastated Zain’s country, destroyed his family and broken his heart. When there is nothing left to stay for, he journeys to England, determined to follow in his father’s footsteps and train as a doctor in London.

He might be a refugee with no money, no friends and no qualifications but he still has his dreams and he’ll do whatever it takes to ensure his future turns out to be the one he wants.

Roman is a world away from the naïve Russian boy who lost everything, one devastating day. Now he’s a fixer for a wealthy Russian, keeping the guy’s business dealings away from the attention of the British authorities. Roman is balanced on a moral tightrope which grows more unsteady by the day. The last thing he needs is to become emotionally involved with a young Syrian, especially when he can’t afford to trust anyone.

A chance discovery in Roman’s car by Zain sets off a violent chain reaction and Zain is thrown into a world that threatens not just his dreams but his life. Roman has difficult decisions to make.

He’s determined to do whatever it takes to keep Zain safe. But lingering shadows from their pasts as well as prominent figures from Roman’s present need to be eliminated if they’re to have a chance together.

As lies and danger escalate, are they doomed before they’ve even begun?

Zain made a slight detour on the way back to the hotel, bought a portion of chips and ate them as he walked. Tomorrow he needed to find a job and a place to live. Not needed to. Had to. The place to live first and he’d lie about having a job. He’d use his savings for a deposit and rent. Once he was in his room, he’d have a long hot shower because there was no bath, curl up in bed, watch TV, and pretend the last few days hadn’t happened.

He unlocked the hotel room door, pushed it open and gaped when he saw Roman lying on his bed.

“Did you install a tracking device up my arse?” Zain asked.

Roman laughed and pushed to his feet. “How are you feeling?”

“Worried. Microchip under my skin, then?”

“Don’t tell me I left a trail of breadcrumbs. That would have been very clumsy.”

Zain forced himself not to back off when Roman walked over to him.

“I followed you this morning,” Roman said. “I’d come to see if you were okay and saw you getting into a car. Once I knew you were in a hotel, I thought you’d be fine but…”

“But what?” Zain’s back hit the wall.

Roman stood right in front of him. Zain could smell his shower gel. Something hot, spicy. Why do I want him so much?

Barbara Elsborg lives in Kent in the south of England. She always wanted to be a spy, but having confessed to everyone without them even resorting to torture, she decided it was not for her. Volcanology scorched her feet. A morbid fear of sharks put paid to marine biology. So instead, she spent several years successfully selling cyanide.

After dragging up two rotten, ungrateful children and frustrating her sexy, devoted, wonderful husband (who can now stop twisting her arm) she finally has time to conduct an affair with an electrifying plugged-in male, her laptop.

She loves hearing from readers and can be contacted at barbaraelsborg@gmail.com If you’d like to hear about future releases please ask to be put on her mailing list.