Release Blitz: The Guy in the Window by Cara Dee

The Guy in the Window | Cara Dee 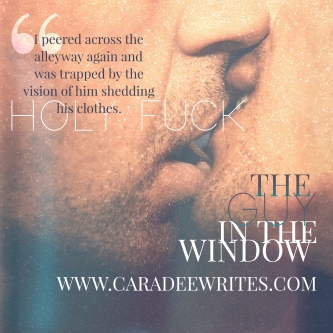 I was in the middle of my divorce when Adam messaged me. I believe his exact words were, “Hi. I think you’re my dad’s brother. Would you like to get to know me?”

My brother and I had never been close, so I’d only met his adopted son a few times when he was very young. Instinct told me to ignore the message, and I did. For a few days. It took an exhausting fight with my soon-to-be ex-wife and half a bottle of whiskey for me to change my mind.

Adam first became “sort of my nephew.” Next, he became the guy who helped me find an apartment in the building next to his. He was a sweet, cheerful young man doing his best to raise his four-year-old daughter, which led to him becoming the guy who wanted to help me patch up my relationship with my own daughter.

Then one night as I got ready for bed, I looked across the alleyway to the next building, where I saw him getting ready for bed too.

I couldn’t look away to save my life.

It was the night he also became the guy in the window.

I killed the light in the bathroom and got undressed, then snuck under the covers without giving Adam’s bedroom another glance.

Okay, I peeked once. He had big windows too, I noted—though not arched ones. Movement caught my eye, and I couldn’t help it. Adam was entering his bedroom again. He tilted his head and stayed in front of his TV for a moment, and right there, in the light from the screen, I saw him so vividly. The hard planes of his chest, his defined abs. I traced the lines with my eyes and felt my fingers twitch, and it was the strongest urge. Holy hell, I hadn’t felt that in years. The urge to draw.

Yeah, draw your nephew. Nothing weird about that.

I flinched and scrubbed my hands over my face. In my very weak defense, there was nothing nefarious about my thoughts. It was appreciation. I could admire something, could I not?

I peered across the alleyway again and was trapped by the vision of him shedding his sweatpants.

My jaw ticked, and I was reeling; warning bells went off, and a voice in the back of my mind shouted at me. But I couldn’t look away. Adam was fucking unreal. He draped his sweats over the back of a chair, completely naked in the comfort of his own bedroom. He had no idea I was watching him. Staring at him. Why was I staring? The voice started sounding panicked, yet I refused to decipher the words. Instead, I catalogued his appearance. His thighs and legs, his lean torso, his broad shoulders, how his biceps grew thicker when he drew a hand through his hair.

He was art. He would’ve fit in with the million other things I used to fill my sketchbooks with when straight lines and CAD work weren’t fulfilling enough. I’d drawn people, expressions, and stolen moments, innocuous things like parks and wildlife, and everyday objects. A book left on the subway, the shadow work of the sun filtering through tree branches, a man losing his scarf in the February wind of Chicago, my daughter… I’d drawn Grace many times, always when she wasn’t looking. When she wasn’t posing.

At some point, I’d finished a sketchbook without buying a new one.

Adam climbed into bed and leaned back against the propped pillows, one arm behind his head, the covers pooling at his waist.

The light that gave his bedroom a bluish glow flashed again as he surfed the channels.

After a while, he kicked off his covers, and I nearly choked on the saliva in my mouth.

He adjusted himself with an absent downward stroke and pulled up one of his knees.

I felt myself flush with heat..

I’m often stoically silent or, if the topic interests me, a chronic rambler. In other words, I can discuss writing forever and ever. Fiction, in particular. The love story—while a huge draw and constantly present—is secondary for me, because there’s so much more to writing romance fiction than just making two (or more) people fall in love and have hot sex.

There’s a world to build, characters to develop, interests to create, and a topic or two to research thoroughly. Every book is a challenge for me, an opportunity to learn something new, and a puzzle to piece together.

I want my characters to come to life, and the only way I know to do that is to give them substance—passions, history, goals, quirks, and strong opinions—and to let them evolve. Additionally, I want my men and women to be relatable. That means allowing room for everyday problems and, for lack of a better word, flaws. My characters will never be perfect.

I’m a writey person who loves to write. Always wanderlusting, twitterpating, kinking, and geeking. There’s time for hockey and cupcakes, too. But mostly, I just love to write. 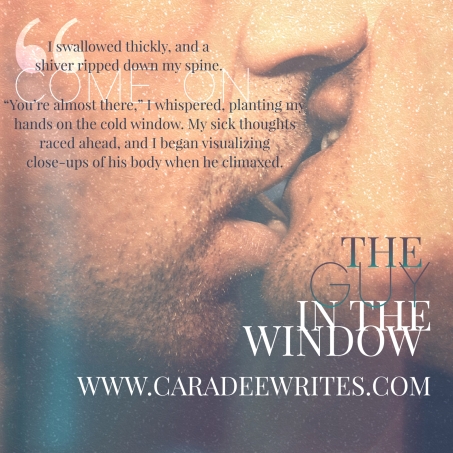 tagged with gay for you, May to December romance, MM, out for you, Release Blitz, romance