The books will all be 20% off at the publisher’s site through October 25.

JMS Books’ Trios are themed collections of three gay romance stories by a trio of authors. Each story is available separately, but readers can get all three for a discounted bundle price.

It contains these stories:

In My Arms Again by Nell Iris: Oxen is lonely, feeling like he’s waiting for something, and can’t focus. But when a very ill stranger collapses on his doorstep, everything changes. The stranger, Vinge, is a Pegasus unable to transform. Both men feel an instant connection that swiftly grows deeper. The questions surrounding Vinge are many. Why is he so familiar? What will it take for the depth of their connection be revealed?

The Murky Depths by Kassandra Lea: Tired of the daily grind of his job, Keston heads out for a weekend at his family’s cabin in Kona Woods. Turns out he isn’t alone, though, as there are others lurking in the shadows. When a near-death experience brings Ness waltzing into his life, everything Keston thought he knew is turned upside down. Will facing what scares him bring to Keston’s life what it’s missing most?

Weekend at Bigfoot’s by Addison Albright: There’s nothing about perky — twinky? — Oliver Hughes that would make Sensational News’ (Never Fake! We Swear!) reporter Wilson Banks think Bigfoot actually exists. But while pursuing soundbites for a tabloid story about Bigfoot, Wilson witnesses something he wasn’t meant to see. In Wilson’s new reality, is there room for love with someone whose dreams are as big as his … er … feet?

In My Arms Again | Nell Iris 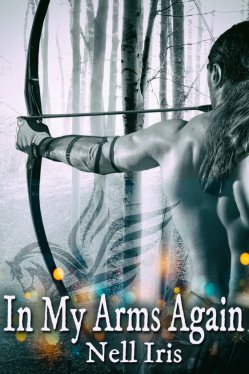 Trapped in a growing sense of restlessness, Oxen the hunter is lonely. Feeling like he’s waiting for something—or someone—he’s unable to focus on getting ready for winter. But when a handsome and very ill stranger collapses on his doorstep, everything changes.

Vinge is from a Pegasus family but has never been able to transform. As soon as he awakens in Oxen’s care, both men feel an instant connection, which grows deeper as Oxen nurses him back to health. Something profound within each man calls out to the other, but neither knows what it is.

The questions surrounding Vinge and their deepening relationship are many. Why is Vinge so familiar to Oxen when they have clearly never met? Why are they both reluctant to take the first step to a real commitment? And what will it take for the true depth of their connection be revealed?

His eyes are still closed when I kneel next to the bed again, but I can tell he’s awake by the way his head tracks my movements.

“I will lift your head and help you drink,” I explain before touching him again, and he tilts his chin down, giving me permission. I slide my hand around his neck, cup the back of his head, and ease it off the bed. He drinks in deep gulps until the bowl is empty, and when I lower him back down to the pillow, he sighs.

I stiffen at his words. “Do you know me?”

Slowly, he moves his hand from his side and lays it on his chest. “I feel you,” he says.

“How?” My head is spinning with all the questions this man’s arrival has brought. For every passing hour, they multiply, and I can no longer keep track of them all.

The stranger doesn’t answer my question—somehow I knew he wouldn’t—so I try another approach. “I am afraid you have me at a disadvantage. I know not who you are.”

His pries his eyelids open, long eyelashes fluttering like a hummingbird’s wing. Even in the dim light of the cabin—cast only by the flames in the hearth—I can make out the color of his eyes: so dark they’re almost completely black, generously sprinkled with flecks of gleaming gold, and despite the obvious tiredness, his gaze is bottomless and intense. It pulls me in and settles some of the restlessness in my chest at the same time.

And when he looks at me, I understand what he’s talking about.

“My name…” His voice falters.

“…is Vinge,” I finish, a gasp escaping at my own words.

Who…or what is lurking in the shadows?

While Keston enjoys his occasional video game tournaments with the kid across the hall, he’s grown tired of the daily grind of his job. With a bit of a push from his boss, he heads out for a weekend at his family’s cabin in Kona Woods. A little time away from the hustle and bustle sounds like just the thing he needs.

Turns out he isn’t alone, though, as there are others lurking in the shadows. When a near-death experience brings Ness waltzing into his life, everything Keston thought he knew is turned upside down, and he runs in fear.

But will facing what scares him bring to Keston’s life what it’s missing most?

“Crap,” he growled. Keston scrambled for the paddle as the first fat raindrop landed on his cheek, coursing down like a year he didn’t remember crying. The once gentle rocking was becoming stomach upsetting and mixed with his actions threatened to capsize him. “Crap, crap, crappity.”

Why didn’t you check the weather forecast, you fanned fool? Instead of being a sitting duck for an electric charge you could be sitting safely before a fire while letting the storm rage on. Even sticking to his original plan would have had better results, he’d simply have raced back through the woods with prayers of no branches falling on his head. Being soaked head to toe he could accept.

The wind picked up, forcing the trees to dance and tearing the leaves from their branches. Keston pitched dangerously to one side and narrowly avoided taking an unwanted swim by shifting his weight the other way. His belongings slid back and forth along the bottom of the canoe. Lightning. Thunder. His pounding heart prodded by fear and adrenaline. And then it hit, the deluge of rain, almost like having a bucket of water dumped over his head, or perhaps this was how coaches felt after the end of a great game when thee players got all excited and doused them in Gatorade or whatever.

He was soaked instantly.

And it was a cold rain, one that dropped the temperature significantly in a matter of seconds. Gone was the beautiful autumn day replaced with a chill that left each breath as a puff on the wind. Keston shivered, somehow managing to wrap his fingers around the paddle. He gripped it tightly and dipped one end into the lake, which by now was tossing him about as if he was a rubber ducky in a child’s bath.

The waves were getting worse. 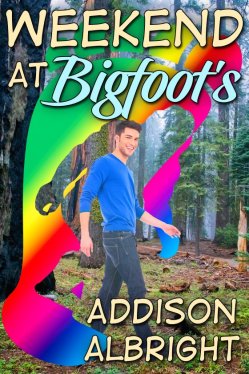 Genre/s: M/M Contemporary Paranormal Gay Romance (with a pinch of Mystery and Comedy)

It wasn’t supposed to be REAL!

It wasn’t supposed to be REAL! Bigfoot doesn’t actually exist. Yetis, shifters, creatures of the night … none of those exist. Right? Right?

There’s nothing about perky—some might even say twinky—Oliver Hughes that would make a skeptic like Sensational News’ (Never Fake! We Swear!) reporter Wilson Banks think otherwise. But while pursuing soundbites for a tabloid story about Bigfoot, Wilson witnesses something he wasn’t meant to see.

In Wilson’s new reality, is there room for love with someone whose dreams are as big as his … er … feet?

This fun novella has a paranormal twist, a hint of mystery, and a flavorful dollop of romantic comedy. Mix it all together for a satisfying HEA!

Wilson’s gaze traveled lower, and if possible, widened further. Because holy mother of Sasquatch, Yeti, and the Abominable Snowman, Emma Pearson had not been exaggerating when she’d insinuated that Bigfoot was well-hung. If anything, she’d underplayed it.

Bigfoot—that’s who he had to be—squawked again with a noise that had an admonishing tone, as if calling out Wilson’s rudeness for gawking at his junk, then covered said junk with his massive hands.

“Sorry,” Wilson muttered. It was reflexive and seemed weird in the circumstances to be calmly apologizing to Bigfoot. Why the hell wasn’t he freaking the fuck out? Most normal people would be.

A vision of Mark screeching, “I don’t think I’ve ever once seen you get worked up over anything,” flashed through Wilson’s head. Apparently Mark had a point.

Wilson blinked. There would be absolutely no way to get the mouth and flaring nostrils of this…creature so perfect in such a close inspection if he wasn’t real. He was real.

And if this was the ultimate test of pragmatism, then—Wilson straightened his back—he was going to pass it with flying colors.

Nell Iris is a romantic at heart who believes everyone deserves a happy ending. She’s a bona fide bookworm (learned to read long before she started school), wouldn’t dream of going anywhere without something to read (not even the ladies room), loves music (and singing along but let’s face it, she’s not Celine Dion), and is a real Star Trek nerd (Make it so). She loves words, poetry, wine, and Sudoku, and absolutely adores elephants!

Nell believes passionately in equality for all regardless of race, gender or sexuality, and wants to make the world a better, less hateful, place.

Nell is a 40-something bisexual Swedish woman, married to the love of her life, and a proud mama of a grown daughter. She left the Scandinavian cold and darkness for warmer and sunnier Malaysia a few years ago, where she spends her days writing, surfing the Internet, enjoying the heat, and eating good food. One day she decided to chase her life long dream of being a writer, sat down in front of her laptop, and wrote a story about two men falling in love.

Born to a military family, Kassandra Lea has been reading since she could hold a book. Growing up she wanted to be Batman, then she discovered writing and realized she could be whatever she wanted if she lived vicariously through her characters.

When not writing, she can be found hanging out with her dog, pursuing her love of horses, and cheering on the Packers. She lives in southern Wisconsin in an old house with her mother, a gang of furry monsters, and a ghost.

Addison Albright is a writer living in the middle of the USA. Her stories are gay romance in contemporary, fantasy, and paranormal genres. She generally adds a subtle touch of humor, a smidgen of drama/angst, and a healthy dose of slice-of-life to her stories.

Her education includes a BS in Education with a major in mathematics and a minor in chemistry. Addison loves spending time with her family, reading, popcorn, boating, french fries, “open window weather,” cats, math, and anything chocolate. She loves to read pretty much anything and everything, anytime and anywhere. 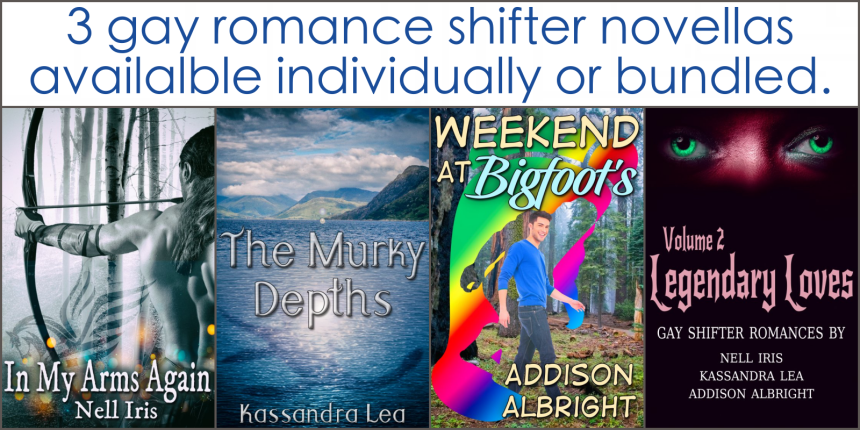