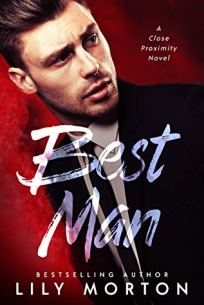 I have a love/hate relationship with Lily Morton (don’t worry, she knows how I feel and we’re good 😊 ).

I just get settled into finally declaring a favourite couple (Gideon & Eli) and then she puts out a new book which has me changing my mind yet again.

So far, every book without fail has seen me revising to take account of the latest unique and brilliant pairing she so skillfully crafts into real and wonderfully flawed characters that feel like people I want to know.

With Jesse and Zeb Lily came this >< close to breaking me because the sass and the snark from Jesse is equalled only by Zeb’s stoic and determined need to be Mr Reliable and my heart wept buckets for his childhood while I was simultaneously trying not to choke to death on my breakfast bar with laughter.

I know some non-British readers have commented on not always getting the references, but – as a Brit – I obviously don’t have the same issue and so every single one of the jokes hits the mark at full speed for me.

As with any romance from Lily, there’s witty dialogue, seriously steamy encounters, a perfectly understandable typically British crisis to be overcome and, in this one, a decidedly dickheadish ex to be dealt with.

Add in a 20-year-age gap, the fake boyfriends trope and forced proximity with only one bed and you have an absolute winner.

There’s a brief mention of Ivo from the equally excellent Risk Taker and I’m pretty sure that Zeb’s mate and business manager Felix went to the same office management school as Dylan from her Rule Breaker and we also get to peek in at Eli and Gideon still living their happy life in Fowey.

I’m now desperately waiting for the second chance/redemption story that has to be coming with Felix and Zeb’s step-brother Max because it’s so very clear that something’s gone on there and she’s giving my heart palpitations at the though of all the hate sex that book could result in.

There’s also very definitely hints of another pairing with Jesse’s flatmate Charlie (please don’t break my heart with him and his illness Lily I’m begging you now!) and Charlie’s best mate Misha, so there’s that to look forward to.

I don’t think it’s possible for Lily to write a book I won’t fall in love with but this one’s definitely hitting all the feels.

#ARC kindly received from the author in return for an honest and unbiased review I freely admit the fangirling.

Ask Me What Hedonism Can Do For You